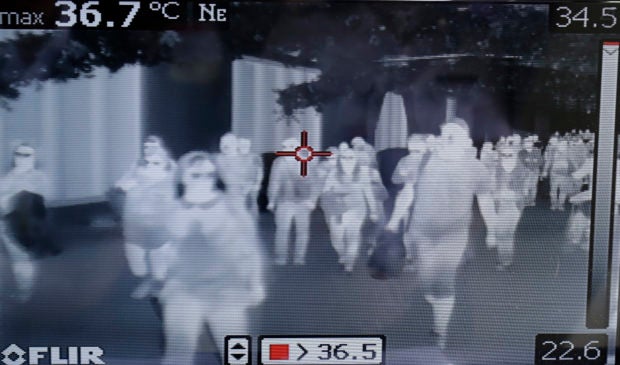 A thermal scanner checks on arriving passengers at Manila’s international airport, Philippines, Thursday, Jan. 23, 2020. The government is closely monitoring arrival of passengers as a new coronavirus outbreak in Wuhan, China has infected hundreds and caused deaths in that area. (AP Photo/Aaron Favila)

MANILA, Philippines—Filipinos returning  from countries reportedly hit by novel coronavirus could be placed in an island for a 21-day quarantine, senators recommended on Tuesday.

Senator Imee Marcos first floated the idea during the hearing of the Senate committee on labor, which was later backed by the panel head, Senator Joel Villanueva.

Marcos recalled that when the outbreak of ebola virus affected West Africa in 2014, Filipino peacekeepers from Liberia were  quarantined in Caballo Island for 21 days.

The same, she said, may be considered for Filipinos who would be returning from China and even from other countries now hit by the coronavirus.

(I heard there are 30 Filipinos from Wuhan who want to come home but if you think of it, you’re going to bring them, evacuate them in order to bring the virus over here. Of course, we don’t  want that to happen.)

Wuhan is a city in China where the virus was first detected and infected people since December last year. Based on report, the virus has already killed over 100 people and infected thousands others.

“I think until now, our best option is simply to tell them to follow their protocols in China and observe the lockdown. Wala namang choice [There is no other choice],” Marcos went on.

Besides, Marcos noted that China has already imposed a lockdown, preventing anyone from going in and out of the country to  prevent the spread of the new virus.

(Maybe we should think it over, where could we bring them. It is not advisable to directly bring them in the Philippines, in Manila for example or anywhere highly populated where they will simply infect and spread the virus.)

Foreign Affairs Undersecretary Sarah Lou Arriola agreed, noting that the World Health Organization is recommending that  people coming from Wuhan must be quarantined first outside the city before they return to their home country.

When Marcos though pressed if the government has now a plan for returning Filipinos from countries affected by the novel coronavirus, Arriola said the Department of Health has not given them yet a “definite plan.”

Villanueva backed the idea of sending returning Filipinos to an island for quarantine.

He said people from Wuhan should be discouraged from going to the Philippines to protect the people here from getting the virus.

“Again, it is important na ma-protektahan natin yung  [that we protect the] greater  majority,” Villanueva told reporters after the hearing.

The senator then advised the  government to enforce a quarantine of returning Filipinos in an island.

Senator Nancy Binay, during the hearing, asked if the government is already considering barring  the entry of those coming from countries with confirmed novel coronavirus.

(Moving forward, are you studying that, for the meantime, we don’t accept those coming from let’s say Beijing, Shanghai and other countries where coronavirus is widespread.)

But despite the lockdown in Wuhan, she noted that a plane carrying people from the city still managed to land in Aklan. The passengers were later subjected to forced repatriation.