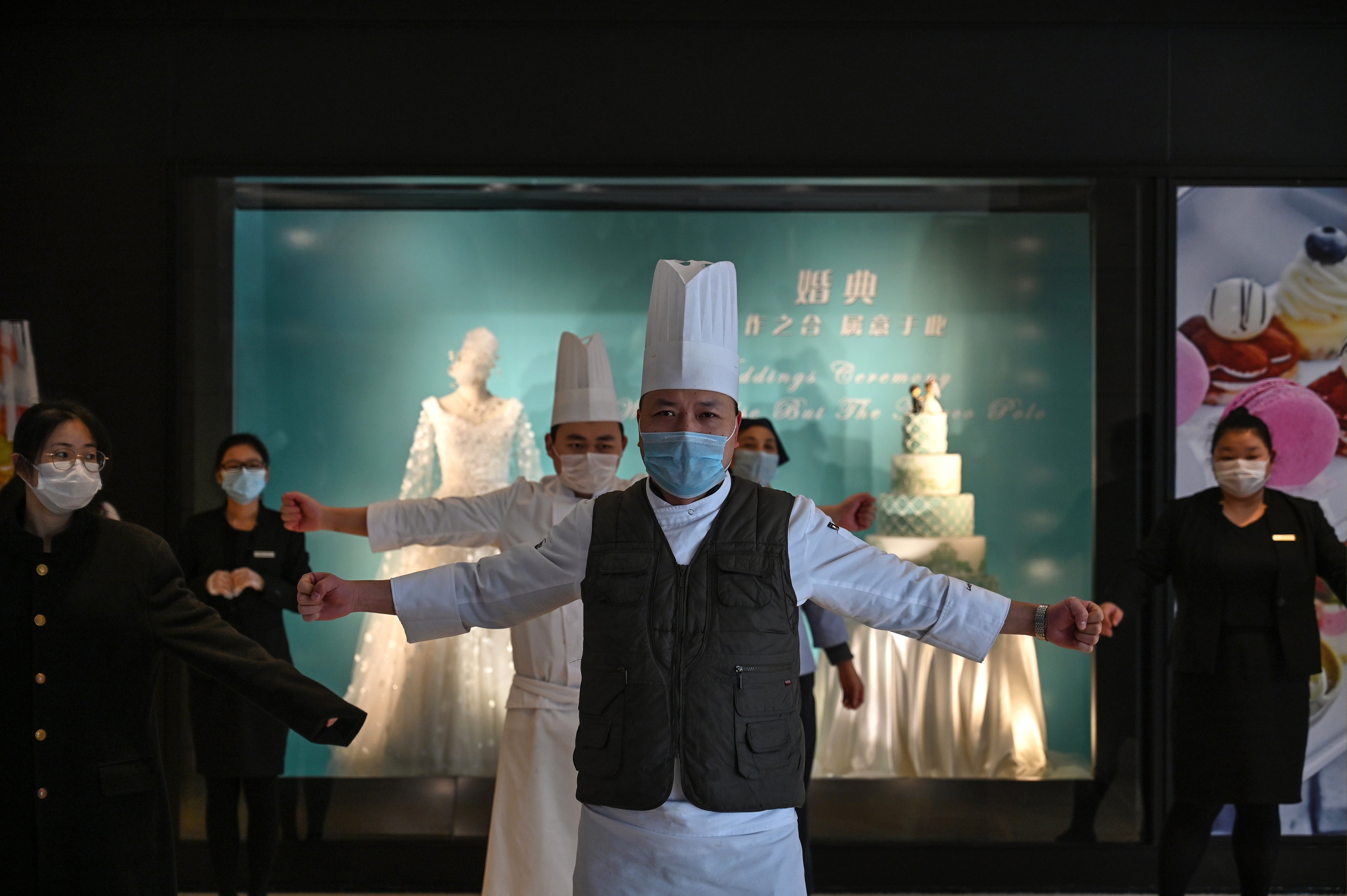 Hotel workers wearing protective masks exercise in the lobby during a staff briefing about how to implement new regulations concerning the current situation in Wuhan in China’s central Hubei province on January 28, 2020, amid a deadly virus outbreak in the city. – The death toll from the coronavirus outbreak in China has soared to 106 while nearly 1,300 new cases have been confirmed, authorities said on January 28. (Photo by Hector RETAMAL / AFP)

WUHAN, China — The United States, Japan other nations raced Tuesday to get their citizens out of the locked-down Chinese city at ground zero of a virus epidemic, as the death toll surged to 106 and the number of confirmed infections doubled to over 4,500.

The contagion, which experts believe emanated from a wild animal market in the city of Wuhan last month, has triggered a desperate Chinese containment effort after spreading nationwide and to more than a dozen other countries.

The government has sealed off Wuhan and other cities in central Hubei province, effectively trapping more than 50 million people, including thousands of foreigners, in a bid to contain the virus as the high-travel Lunar New Year holiday unfolds.

“The virus is scary, but the biggest fear for me is that this thing will go on for months, and it will get harder and harder to get supplies, and to live.”

Governments are scrambling to devise ways to safely get their citizens out of the city of 11 million.

Japan announced it would send a chartered flight to Wuhan on Tuesday evening to evacuate about 200 of 650 Japanese nationals.

“We will also bring with it aid supplies such as masks and protective suits for Chinese people as well as for Japanese nationals,” Foreign Minister Toshimitsu Motegi said in Tokyo.

Motegi said the plane would leave Wuhan on Wednesday morning, and that efforts were being made to organize more flights.

The United States was also trying to organize a rescue mission.

A chartered California-bound flight with limited space had been scheduled to leave Wuhan on Tuesday with consular staff and some American citizens.

But the State Department said it was postponed to Wednesday, without giving a reason.

France has also said it intends to fly its citizens out of the city in the middle of this week.

Several other countries also were working to repatriate their people, while Germany said it was considering doing so.

Exposure to a sneeze or cough from an infected person appeared to be the main transmission mode, Chinese infectious disease experts told reporters on Tuesday.

To prevent huge numbers of people coming into close contact with each other, China has imposed tight transport restrictions in other parts of the country.

In the latest move, state-owned China Railway Group announced on Tuesday that it would suspend hundreds of train lines throughout the country.

China already has extended the Lunar New Year national holiday into next week to keep people at home.

And the education ministry on Tuesday said the spring semester for schools and universities would be postponed, giving no resumption date.

Despite the unprecedented measures, the virus has shown little sign of slowing down.

On Monday, the first infections were confirmed in Germany, Canada, and Sri Lanka.

Colombo followed up by imposing new visa restrictions on Chinese visitors to the island.

President Donald Trump said the United States has offered Beijing “any help that is necessary” in combatting the virus.

But the United States, Turkey, and Germany were among nations urging their citizens to “reconsider” all travel to China.

Landlocked Mongolia — which is heavily dependent on trade with China — took the drastic step of closing the border with its huge neighbor to cars while banning large gatherings and suspending classes.

Medical facilities have been overwhelmed in Wuhan, which has become a near ghost town.

China has deployed hundreds of military medics to help and is building two field hospitals, aiming to finish them in just 10 days.

Hundreds of masked workers toiled around the clock at one site, where a foundation was already taking shape and electrical switchboards were up.

“We have to work fast to combat the epidemic,” a worker in his 30s, told AFP.

Pacey, the British teacher, said he and other foreign friends in Wuhan were in contact via chat groups “to keep each other’s spirits up.”

He was rationing what food he had and hopes for a UK-organized evacuation but complained that his government has been unresponsive.

“Things here are going to get worse, and I feel that China should be able to deal with their own citizens and not have me needing extra help,” he said.

But Wuhan’s people, who have a reputation in China for resilience, sought to project a fighting spirit.

A building lit up the night sky late on Monday with those words in red.

The World Health Organization last week stopped short of declaring the outbreak a global emergency, which could have prompted a more aggressive international response such as travel restrictions.

But the WHO on Monday admitted making an error in originally assessing the virus’ worldwide threat as “moderate”, issuing an update late Sunday saying the risk was actually “high at the global level.”

WHO chief Tedros Adhanom Ghebreyesus traveled to Beijing this week for discussions with Chinese officials to coordinate on the crisis.