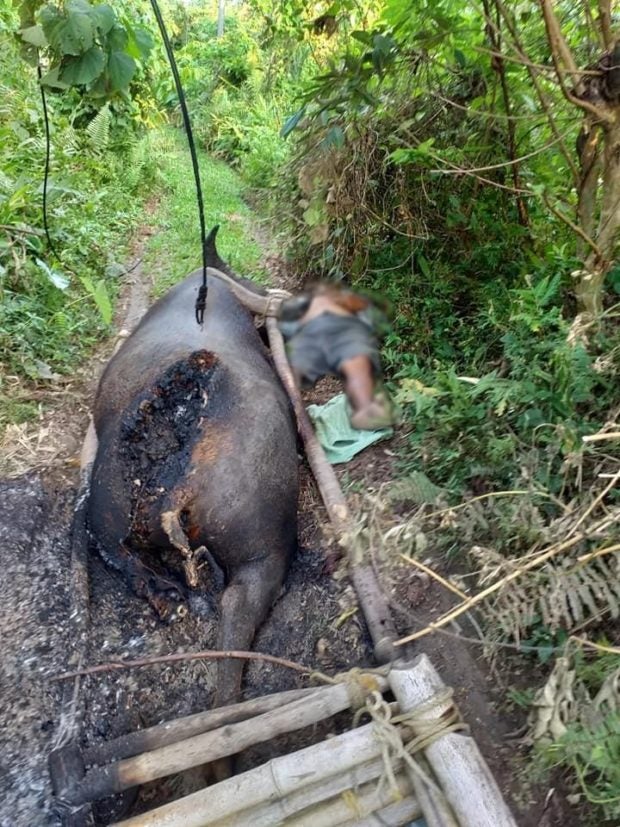 Romualdo Pace and his carabao were found dead after they were electrocuted in Barangay Tombo, Alangalang town in Leyte province. CONTRIBUTED PHOTO

TACLOBAN CITY –– A farmer was electrocuted while on his way to his farm in Barangay Tombo, Alangalang town in Leyte province on Monday.

The fatality was identified as Romualdo Pace, 69, a resident of Barangay Santigo, about 4 km away from Tombo, said Police Chief Master Sergeant Alejandro Alde, Jr.

Also killed was the victim’s carabao.

Alde said there were power lines in the area that were damaged due to Typhoon “Ursula” that hit the town last December 24.

“The victim could not have been aware that there were live wires in the area and he could have touched one of them,” he said.

Read Next
2 suspects killed, P1.7-M worth of shabu seized in Batangas bust
EDITORS' PICK
10 Filipinos positive for COVID-19 in UK, 7 in Ireland — envoy
Nograles: Cabinet members to donate 75% of monthly salary to aid COVID-19 fight
Quick chat with Nicole Andersson: ‘You really don’t need much to be happy’
IATF to LGUs: Issue ordinances vs attacks on frontliners, COVID-19 patients
Diokno to Duterte: OK to make fun of buck tooth, but focus on people’s needs first
Robredo spox thanks Duterte for defending VP’s efforts vs COVID-19
MOST READ
Coronavirus hotbed Rizal to shut borders on April 6
Gov’t mulling quarantine period extension of 15-20 more days
ADB warns PH against prolonged lockdown
Sotto on Isko Moreno’s call: We do our job without the media following our every move
Don't miss out on the latest news and information.