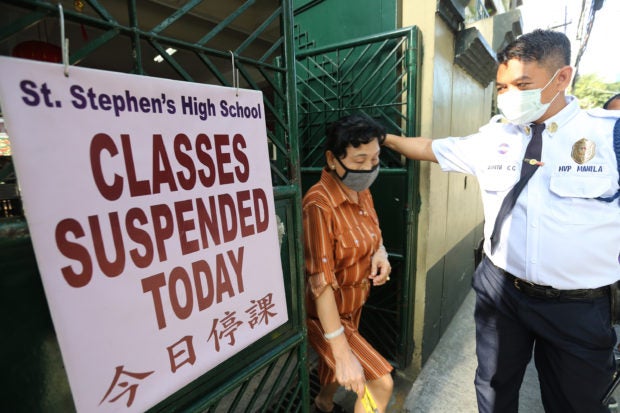 SCHOOL PRECAUTION St. Stephen’s High School and at least two other schools suspended classes indefinitely on Monday to monitor students returning from China and Hong Kong after the Lunar New Year holidays as a precaution against the new coronavirus from China. —JOAN BONDOC

Several private schools in Metro Manila suspended classes on Monday amid a viral epidemic in China as Health Secretary Francisco Duque III announced that 11 foreigners in the country, including two in the metropolis, were under observation for the deadly disease caused by a new coronavirus.

Most of the schools that shut down have Chinese-Filipinos for students, and they called off classes to monitor students returning from China and Hong Kong after the Lunar New Year holidays, with some of them required to undergo self-quarantine for two weeks before they would be allowed back.

Both Duque and Education Secretary Leonor Briones said on Monday that there was no urgent need to shutter schools yet, but the schools that suspended classes appeared keen to take extra precautions as the toll from the China epidemic spiked to 80 dead and more than 2,700 confirmed infections on Monday. In addition, there were nearly 6,000 suspected cases and more than 30,000 people under medical observation.

“Classes will be indefinitely suspended starting Jan. 27, 2020, so that the school can gather information on the travel history of our students, teachers and staff shortly before and during the Chinese New Year break,” Uno High School said in its announcement.

Briones said the schools were allowed a “greater degree of autonomy,” but they should hold make-up classes.

Duque said he would talk to the schools to find out the basis for the suspensions, stressing that the Philippines still had no confirmed cases of the illness.

“In so far as the Department of Health (DOH) is concerned, we’re not aware of the reasons why they decided to suspend classes. There really is no need as of now,” Duque told a news briefing.

Duque said the DOH was monitoring 11 foreigners who arrived in the Philippines from the epicenter city of Wuhan, capital of Hubei province in central China. He said the foreigners were Chinese, Brazilian, American and German nationals and two of them were in hospitals in Metro Manila, one in Mimaropa, three in Western Visayas, one in Eastern Visayas, three in Central Visayas, and one in Northern Mindanao.

He said the foreigners were isolated and some had been discharged after testing negative for the new coronavirus.

In Angeles City, Pampanga province, Angeles University Foundation Medical Center on Monday called fake reports on local radio and social media that it had admitted a Chinese national who was infected with the new coronavirus.

In Manila, some of the schools that suspended classes also asked students, faculty and staff who had recently traveled to any of the countries with confirmed cases to put themselves on self-quarantine for two weeks.

Uno High School also required self-quarantine for students who had traveled to Boracay Island, which has direct air links with Wuhan.

“After the quarantine period, please present a medical certificate (dated and signed by a doctor) as clearance of any symptoms of the coronavirus infection,” the school advised its students.

“Students, teachers and staff who have been found out to have concealed their travel details will be given sanctions, will be sent home, and will not be allowed to enter the school,” it added.

The other schools were careful to note that the suspension was just a preventive measure, emphasizing that no cases of the illness on their campuses had been reported.

Saint Jude Catholic School said it would use the day to conduct “thorough data gathering and institute precautionary measures.”

Pace Academy said it gave students a day off so they could secure surgical masks that they would be required to wear on campus.

In its advisory, the school said it had told the parents that their children would need to bring three masks and change masks every four hours at school.

It also said it would start checking the temperature of everyone entering the school.

The pathogen for the pneumonia-like illness is tentatively called 2019-nCov, and it is believed to have originated from a market for wildlife in Wuhan.

It spreads fast, like the Severe Acute Respiratory Syndrome (SARS) coronavirus that infected nearly 2,000 people and killed almost 800, mostly in China, in 2002-03. But unlike SARS, the new coronavirus is transmissible from human to human.

Malacañang said on Sunday that there was no need to evacuate Filipinos working in China, but on Monday Sen. Christopher “Bong” Go said 30 to 50 Filipinos in Wuhan had signified intention to return to the Philippines amid the scare caused by the outbreak.

But Go, who heads the Senate health committee, said the Philippines would first get permission from China to bring home the Filipino workers.

The Department of Foreign Affairs (DFA) is still waiting for word on the matter, he said.

The DFA had asked guidance from the DOH on procedures for the evacuation and health advisories for Filipinos in China, the agency said in a statement on Monday.

According to official estimates, there are nearly 300,000 Filipinos in China.

The Philippine Consulate General in Shanghai reported on Monday that it had gotten in touch with about 150 Filipinos in Wuhan. It reported no one sick. —WITH REPORTS FROM DEXTER CABALZA, JULIE M. AURELIO, LEILA B. SALAVERRIA, DONA Z. PAZZIBUGAN AND TONETTE OREJAS INQ