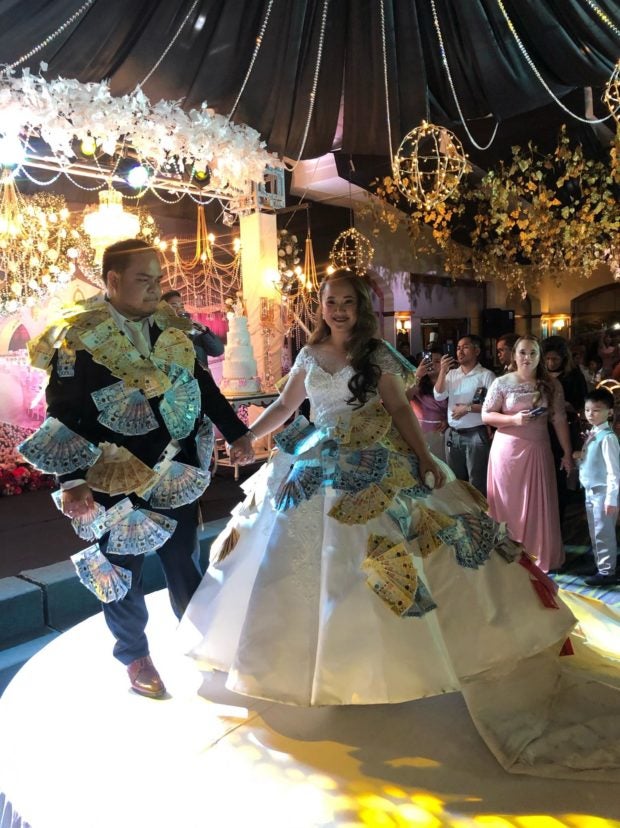 A lucky pair of newlyweds in Davao City has received a generous outpouring of love through cash gifts from their family, relatives and guests during their prosperity dance.

In a viral Facebook post, Ernie Piamonte Balili, a videographer at the wedding, reported that couples Jay Alvin Milagrosa and Kastiene Casten received cash gifts which were pinned on their wedding gown and suit, respectively, on their wedding day.

The couple tied the knot at Sta. Ana Shrine Parish on Wednesday, Jan. 22, followed by a reception at the Grand Regal Hotel in Davao del Sur.

In an interview with INQUIRER.net, the 28-year-old bride said that the wedding prosperity dance has been a part of their family’s tradition, to wish for good fortune in their marriage.

(At the wedding, the parents of both parties should give the same amount of money, and the rest are from guests. This is because it is believed that it is better to start out with comfort, then it is up to us later as to how we would grow the money.)

Casten also spoke about how blessed they are for the generosity of their families and guests, as well as that of their godparents who gave them P10,000 to P20,000 cash gifts.

The newlyweds’ clothes were almost covered with P1,000 and P500 bills formed into fans, which totaled to P629,600. That amount does not even include yet the cash gifts given by their relatives from the United States.

Their wedding expenses cost them almost P500,000, which the couple considered too expensive, but they also feel blessed about having their wedding planner, Kyam Delacruz Parallon, who stayed within their budget.

(I cried while we were dancing because I was so happy. All of our stress from the wedding preparations and planning were swept away, because of course, budgeting is important. We only wished for a simple wedding.)

As to what are they planning to do with all the money they received, Casten and Milagrosa will be using a part of it for their honeymoon in Japan. For now, the couple already deposited the cash gifts into their bank account, and soon they will be using the rest of it when they venture into business. They aim to reach their first million in the next three to five years, “in God’s will po,” said Casten.

Meanwhile, Jan Marianed Casten Faeldonia, the 21-year-old niece of the bride, also shared some graduation and wedding photos of her aunts, who are the bride’s sisters. Faeldonia told INQUIRER.net that their family’s “prosperity dance” tradition starts on the family members’ graduation day, continuing on to their wedding day. 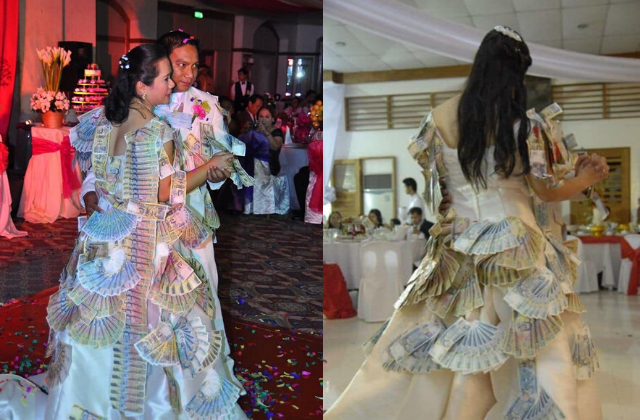 The Casten family’s tradition takes its roots from their businessman dad and great grandparents. These elders are said to be the pioneer businessmen and farmers in their community.

As of this writing, Balili’s Facebook post of the couple’s photos has garnered over 4,500 reactions, 3,800 comments and more than 16,000 shares.

The money dance, also called “dollar dance” or “apron dance,” is a tradition which started from ancestors of various nationalities. It is still widely observed around the world, depending on culture and geographical location, and is believed to attract good luck for the couple’s future.

In the Philippines, it is also referred to as “sayaw ng pera.” Families and guests at the wedding have an opportunity to give money to the couple by pinning bills on the couple’s wedding clothes, or by handing over to the couple envelopes containing cash. In provinces, some would let the couple dance in a wide basin where the guests would throw their cash gifts. JB

LOOK: This couple’s pet dogs joined the entourage in their Cavite garden wedding