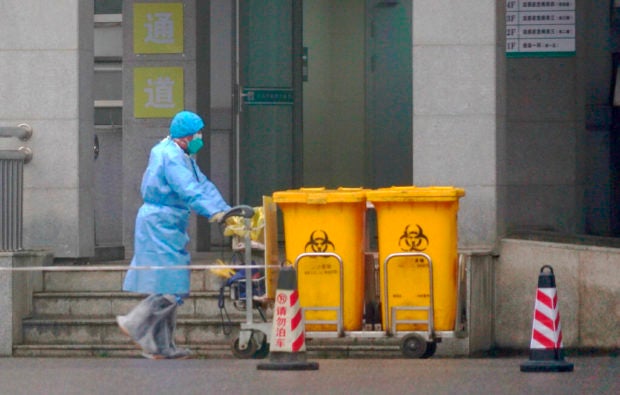 Staff move bio-waste containers past the entrance of the Wuhan Medical Treatment Center, where some infected with a new virus are being treated, in Wuhan, China, Wednesday, Jan. 22, 2020. AP

TORONTO — Canadian officials said Sunday that they are tracking down airline passengers and others who were in close contact with the first person in the country detected with an emerging virus that originated in China.

Dr. Theresa Tam, Canada’s chief public health officer, said the man, who is in his 50’s, had mild symptoms when he flew from Wuhan to Guangzhou, China, and then on to Toronto.

He was admitted to hospital a day after arriving on a China Southern Airlines flight on Thursday. Officials said Saturday that the man was in stable condition in isolation.

Tam said officials are locating passengers who were within a 2-meter radius of the man’s seat or anyone who may have served or helped him.

Tam said other passengers or people at the airports should not be overly concerned. She said close human-to-human contact is necessary to spread the virus.

“Any other passengers should remain calm,” Tam said. She said the risk to Canadians remains low.

While the illness was confirmed by a test in Toronto, official confirmation would come after tests by the federal government’s National Collaborating Centre for Infectious Diseases in Winnipeg.

The new viral illness was identified in China, where it has killed 56 people and has spread worldwide.

Coronaviruses cause diseases ranging from the common cold to SARS, or severe acute respiratory syndrome. SARS first infected people in southern China in late 2002 and spread to more than two dozen countries, killing nearly 800 including 44 Canadians.