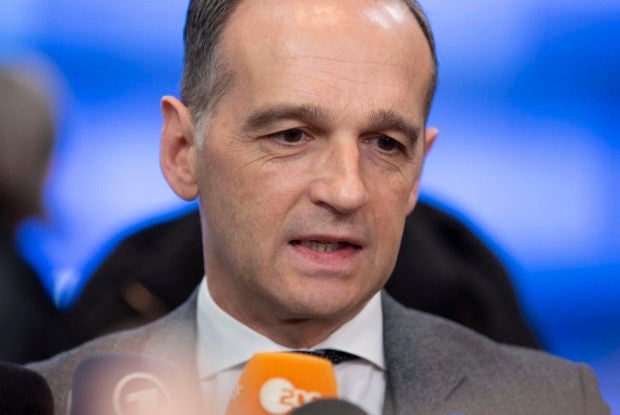 BERLIN — Germany’s foreign minister is calling for strengthened efforts against anti-Semitism to ward off the possibility that many Jews decide to leave the country.

Heiko Maas said in an article Sunday for the weekly Der Spiegel that German politicians must do more “but there is one thing they can’t do: replace solidarity in everyday life.”

Maas’ comments came a day before the 75th anniversary of the Soviet liberation of the Nazis’ Auschwitz death camp and at a time of rising concern in Germany and elsewhere in Europe about anti-Semitism.

In October, a man tried to force his way into a synagogue in Halle on Judaism’s holiest day, later killing two passers-by before being arrested. The suspect posted an anti-Jewish screed before the attack.

Maas said anti-Semitism has become part of everyday life now for Jews in Germany and “it doesn’t surprise me that nearly every second Jew in Germany has thought about leaving the country.”

“We must urgently take countermeasures so that such thoughts don’t turn into bitter reality and it doesn’t come to a massive exodus of Jews from Germany,” he wrote. “That people of Jewish faith no longer feel at home here is a real nightmare — and a disgrace, 75 years after the liberation of Auschwitz.”

Maas said too few European Union countries have national commissioners against anti-Semitism. He said when Germany holds the EU presidency later this year, it will step up the fight against online hate and disinformation.

He said the security of Jewish facilities and communities must be improved throughout Europe. Germany will give the Organization for Security and Cooperation in Europe 500,000 euros ($551,000) this year to that end.

Germany’s main Jewish leader told the daily Tagesspiegel that he has seen a “change in the social climate” over the past decade, pointing among other things to the rise of the far-right Alternative for Germany party.

Asked if Jews in Germany are “sitting on packed suitcases,” Josef Schuster, who heads the Central Council of Jews, said he wouldn’t put it that drastically.

“The suitcases are unpacked, but people are checking where the empty suitcase is,” he was quoted as saying.

Schuster added: “Is there a European country in which things are better? Jewish facilities have been the target of attacks in the U.S. too. And you’re not safe from terrorist attacks, even in Israel.”