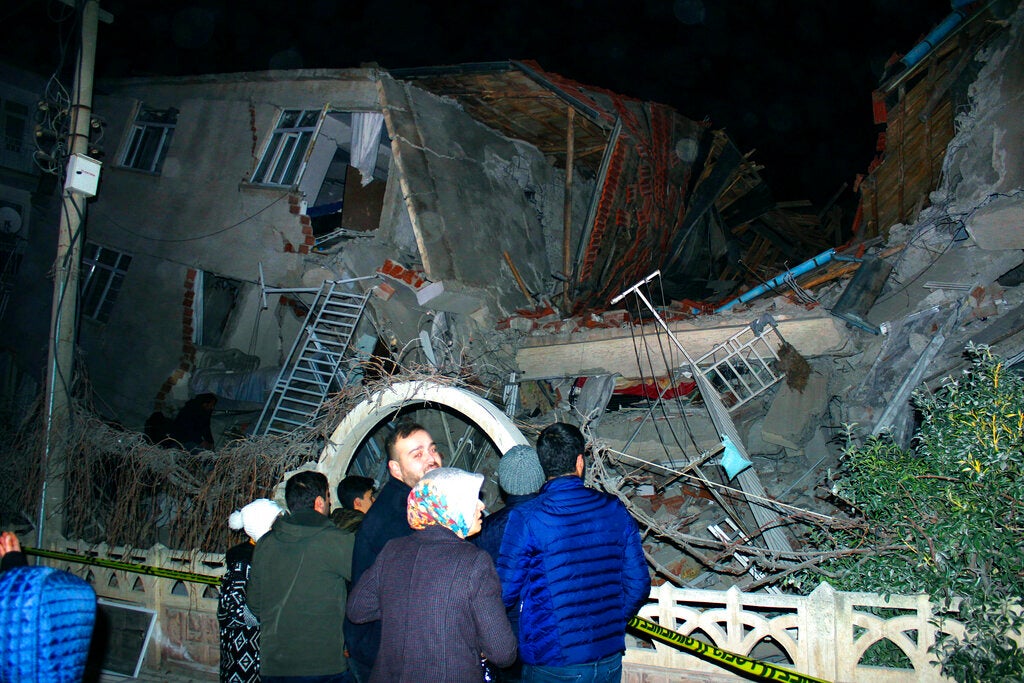 People look at a collapsed building after a 6.8 earthquake struck Elazig city center in the eastern Turkey on Friday. (IHA via AP)

ANKARA, Turkey — A 6.8-magnitude earthquake rocked a sparsely-populated part of eastern Turkey on Friday, killing at least 18 people, injuring more than 500 and leaving some 30 trapped in the wreckage of toppled buildings, Turkish officials said.

Rescue teams from neighboring provinces were dispatched to the affected areas, working in the dark with floodlights in the freezing cold, and Defense Minister Hulusi Akar said troops were on standby to help.

Hundreds of residents were left homeless or with damaged homes.

TV footage showed rescuers pull out one injured person from the rubble of a collapsed building in the district of Gezin, in the eastern Elazig province. Around 30 were believed to be trapped inside collapsed structures in Elazig province, Interior Minister Suleyman Soylu said.

Health Minister Fahrettin Koca, who traveled to the afflicted area together with Soylu, said 13 people were killed in Elazig, including two people who suffered heart attacks, and five others died in Malatya. A total of 553 people were hurt, including 11 who were in serious condition.

Some 30 buildings had collapsed from the quake in the two provinces, according to Murat Kurum, the environment minister.

Turkish President Recep Tayyip Erdogan said on Twitter that all measures were being taken to “ensure that the earthquake that occurred in Elazig and was felt in many provinces is overcome with the least amount of loss.”

The quake struck at 1755 GMT, 8:55 p.m. local time, at a depth of 6.7 kilometers near the town of Sivrice in Elazig, the Disaster and Emergency Management Presidency, or AFAD, said. It was followed by several aftershocks, the strongest with magnitudes 5.4 and 5.1.

Elazig is some 750 kilometers (465 miles) east of the capital, Ankara.

People in Elazig whose homes were damaged or were too afraid to go indoors were being moved to student dormitories or sports center amid freezing conditions.

Elazig Governor Cetin Oktay Kaldirim told NTV television that a fire broke out in a building in Sivrice, near the epicenter, but was quickly brought under control.

Interior Minister Soylu was at a meeting on earthquake preparedness when the quake struck.

The Kandilli seismology center in Istanbul said the quake measured 6.5., while the U.S. Geological Survey gave the preliminary magnitude as 6.7, and said the quake affected not only Turkey but also Syria, Georgia and Armenia.

A magnitude 6 earthquake killed 51 people in Elazig in 2010.