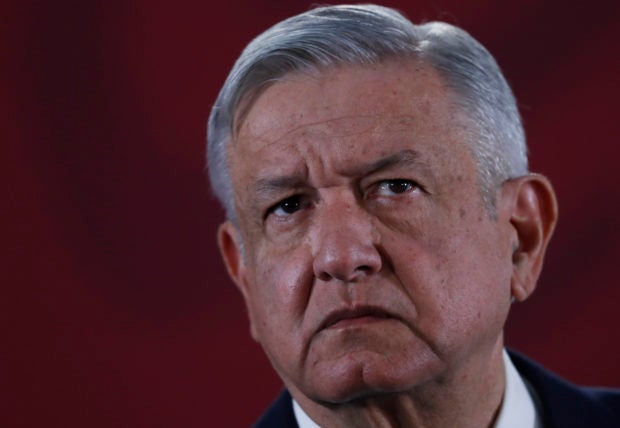 In this November 29, 2019 file photo, Mexican President Andres Manuel Lopez Obrador listens to questions during his daily morning press conference at the National Palace in Mexico City. Shortly before taking office Lopez Obrador decided to create an army of volunteers dubbed the “servants of the nation,” to canvass people who receive government benefits collecting their personal information in part to see if they might be eligible for yet more help from various programs promised during the campaign for the likes of farmers, the disabled, unemployed youth and the elderly. The effort alarmed opposition political parties who saw it as an attempt to illegally use public funds to promote López Obrador and his leftist Morena party. (AP Photo/Marco Ugarte, File)

MEXICO CITY — One day after a vigilante group revealed that it was using children as young as eight years old as “recruits” for armed defense patrols, Mexico’s president said Thursday that drug cartels, too, are recruiting ever-younger kids.

The whole issue has sparked a debate in Mexico over the use of children in armed confrontations, with rights groups saying the practice threatens not only kids’ safety, but their mental health.

“The gangs are having trouble getting hitmen, so they are recruiting more children and young people because there is competition,” López Obrador said. “The thing is, the social programs are giving youths more options, and that is leading them (gangs) to get desperate, and they are looking to reinforce themselves with kids”.

López Obrador said “the key is to attack the root causes, to stop the breakdown of families, to strengthen values and material welfare, to give attention to young people” to avoid them being recruited.

The issue came to a head Wednesday when a vigilante group in southern Mexico publicly displayed a troop of 19 armed, masked children who had been recruited to act as “community police”.

The children appeared to range in age from about 8 to 15, and they carried shotguns and rifles. Some of the very youngest carried sticks instead of guns.

They performed rifle drills on a road in the township of Alcozacán in southern Guerrero state. In a nearby town, a local drug gang had killed 10 men and burned most of their bodies, and vigilante organizers said the kids were needed to guard their villages against the drug gang.

The head of the Guerrero state human rights office forcefully condemned the vigilantes, saying they were exposing the children to danger.

“We categorically reject the involvement of minors in security roles that put their physical safety, their lives and their development at risk,” the office said in a statement.

But the prison and youth advocacy group Reinserta Un Mexicano A.C. said the Guerrero state government’s position is irresponsible because authorities there “have been systematically negligent in guaranteeing minimal conditions of welfare for these communities and in defending the rights of children” in the conflict-torn area.

Drug gang violence has been so bad in Guerrero that thousands of residents have fled remote communities across the state and now live as internally displaced persons.

For example, the vigilantes said many of the children who have been recruited can’t continue their education beyond grade school because they are afraid to leave their towns to travel to the nearest middle school.

The vigilantes belong to the Regional Council of Community Authorities, a split-off from a decades-old force known as the CRAC. Since the 1990s, the groups have mostly policed remote indigenous hamlets where regular police seldom venture.

While the community police are supposed to combat minor crimes like fights and public intoxication with traditional indigenous punishments like temporary arrest or community service in lieu of fines, they have been drawn into the dispute with drug gangs.
The vigilantes are fighting the violent Ardillos drug gang, which has been blamed for the Friday killings of 10 area men. But some say the vigilantes themselves have had ties to a rival drug gang, the Rojos.