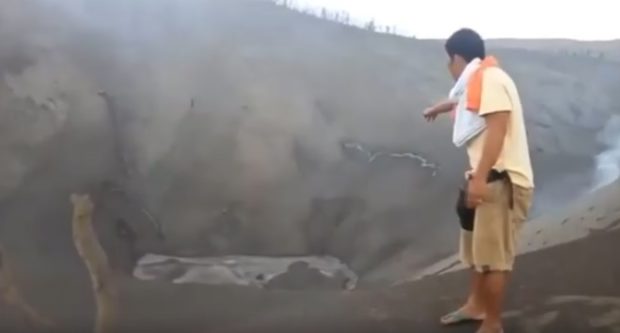 A screengrab of a viral video showing a man who went up the Taal Volcano and recorded himself at the mouth of what appeared to be one of the craters. Phivolcs has strictly prohibited anyone from entering the 14-kilometer danger zone considering that the volcano may erupt anytime, much more, up close the crater where toxic sulfuric fumes pose grave danger to health.

MANILA. Philippines — The chief of the Philippine Institute of Volcanology and Seismology (Phivolcs) on Friday admonished the man who recorded a now-viral video on social media of the Taal Volcano Island.

While the man did not go to the main crater of the volcano, Phivolcs director Renato Solidum said the location where the man was in, specifically the Daang Kastila Trail is a dangerous spot.

He was referring to the volcano’s ash emission on Friday morning, which according to Taal resident volcanologist Paolo Reniva was the “strongest in the past few days.”

(Even if it was not a strong eruption, even if it was a steam-generation explosion or phreatic eruption, it is still dangerous to those who still try to go to the island.)

He said the Taal Volcano Island has been off-limits to residents even when only alert level 1 was raised. Currently, alert level 4 remains hoisted, meaning a hazardous explosive eruption is possible within hours or days.

In that video, the unidentified man, together with another person who is holding the camera, went up the Taal Volcano and recorded himself at the mouth of what appeared to be one of the craters, while annotating at how the crater has dried up. Throughout the video, sulfuric smoke swirled around the man in the background, as he covered his mouth and nose with just a piece of cloth.

INQUIRER.net tried to contact the uploader of the now-viral video, but did not respond to our request for interview or comment.

Phivolcs has strictly prohibited anyone from entering the 14-kilometer danger zone considering that the volcano may erupt anytime, much more, up close the crater where toxic sulfuric fumes pose grave danger to health.

Following this incident, Solidum urged local authorities in Batangas province to further urge residents not to force their way inside the 14-kilometer radius danger zone of the volcano.