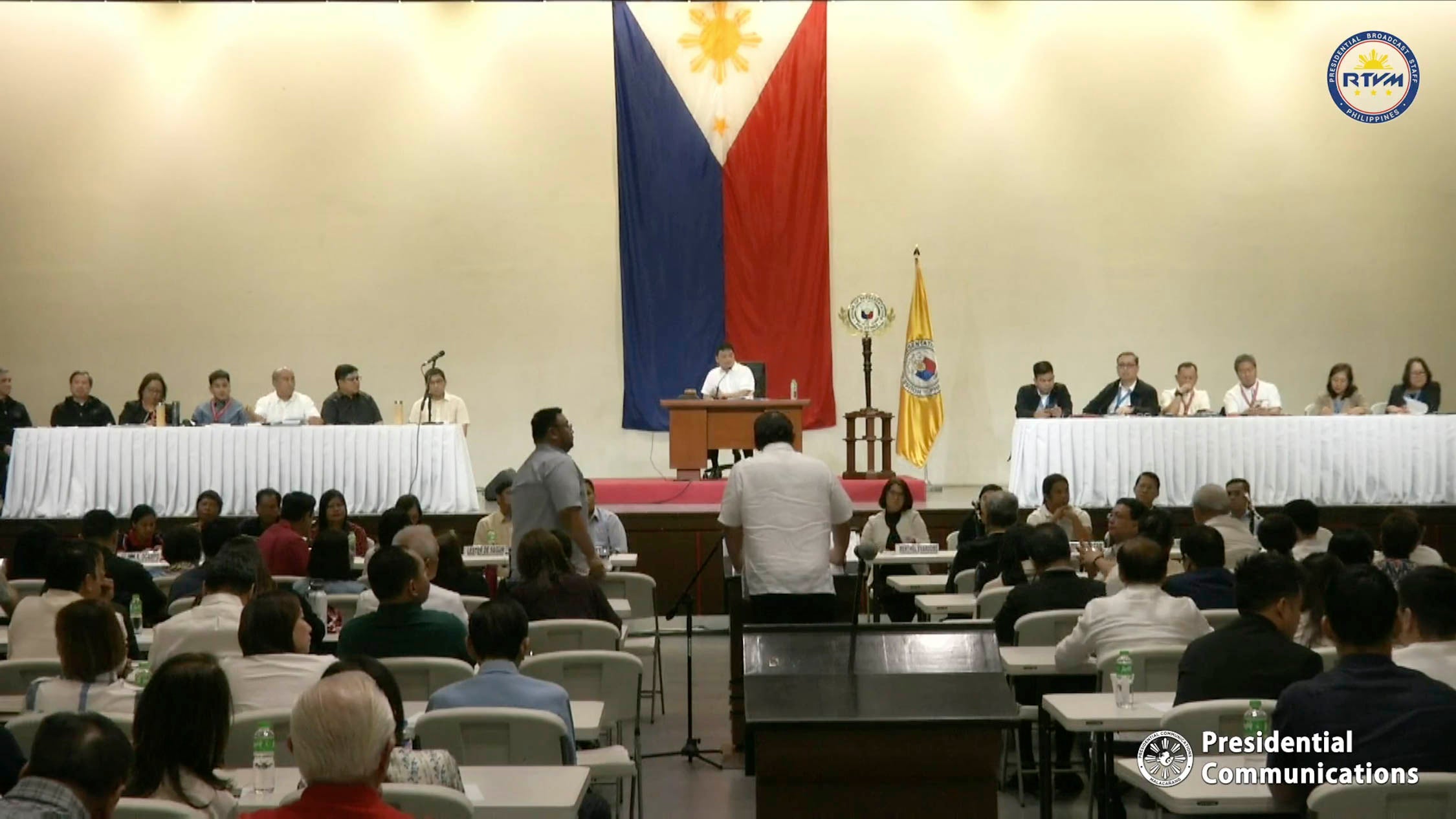 A FIRST SINCE 1978 A total of 204 House members gather at the Batangas Convention Center on Wednesday for a rare, out-of-town plenary session, the agenda centering on relief and rehabilitation efforts for the estimated 1 million people displaced by the Jan. 12 Taal Volcano eruption. —SCREENGRAB FROM RTVM

BATANGAS CITY— Hopping off dark-tinted SUVs and trailed by phalanxes of aides and escorts, more than 200 members of the House of Representatives descended on this disaster-stricken province on Wednesday to hold their first out-of-town plenary session.

On top of the day’s agenda was the sponsorship of a bill creating a department of disaster resilience, whose urgency appeared to be highlighted by the alert level 4 threat that still hung over areas around Taal Volcano, indicating a possible “violent eruption within hours to days.”

House leaders also introduced a bill for a P30-billion supplemental budget for emergency relief for communities ravaged by Taal’s eruption.

The 300-strong chamber adopted twin measures, House Resolution No. 662 and No. 655, committing to the swift passage of the supplemental budget, and urging agencies to release calamity funds to aid the needful.

During the session, the House, acting on a suggestion by Majority Leader Martin Romualdez, relaxed its own rules by allowing nonmembers to address the body.

The lawmakers listened to powerful testimonies and emotional pleas from local government leaders, including from Agoncillo and San Nicolas towns, two of the hardest-hit in Batangas, as they sought assistance in various forms, from cash and food to transport for abandoned pets and livestock.

“Everything was wiped out. Nothing was left, even our houses. The people of my barangay have nowhere to take shelter in,” said Joceline Bayanay, chairperson of Barangay Alas-as in San Nicolas town.

Agoncillo Mayor Daniel Reyes said his municipality was “deserted and devastated with its people displaced.”

“Our people are now scattered in Batangas, Laguna, Cavite and Metro Manila,” he said, though he added that through social media, his office had located most of his constituents.

Wednesday’s session, according to House leaders, was historic and unprecedented, as it was the first to be held outside the halls of Congress since 1978, when the Batasang Pambansa complex was built.

The arrival of the lawmakers and their entourages created disruptions in and around the city, stalling traffic on a number of streets due to road closures and rerouting schemes, with security tightened at several intersections.

Streamers were hung at the gates welcoming Speaker Alan Peter Cayetano and the members of the House.

On the night before the out-of-town session, the House leadership advised the lawmakers to refrain from any ostentatious display.

The dress code was “not formal, hence, short-sleeve barong/office dress.”

“Please note that we wish to keep everything simple in solidarity with those affected by the eruption. We endeavor not to be a burden to our hosts,” they were told.

Over the past two weeks, Taal’s stirrings had forced tens of thousands of people from their homes. Ash that billowed from the volcano‘s main crater blanketed entire cities, reaching as far away as Metro Manila on Jan. 12 to 13.

Still, the lawmakers were assured by Cayetano that their makeshift plenary hall at the Batangas City Convention Center was “way beyond the danger areas,” located some 25 kilometers from Taal Lake.

Just across the venue, however, was the largest evacuation center in this city, the Batangas City Sports Complex, which was now housing hundreds of people displaced by Taal’s activity.

But there was no sign of the crowds of evacuees anywhere near the tightly guarded venue, as a fleet of buses, coasters and vans carrying congressional staff and employees, as well as journalists, began pulling up on the parking lot in the early morning.

At 1:30 p.m., the House convened itself with the Speaker presiding to set up a listening party featuring the representatives of areas hardest hit by Taal’s eruption, especially in Batangas.

A total of 204 House members responded to the roll call.

‘Long-lasting, reliable solutions’“We are here to show Batangas, including Cavite and Laguna, that we love you as we love ourselves,” Cayetano said in his speech.

“Yes, there is a risk of being here, but you are facing that risk every single day. So, what is one day for your national Congress, the House of the people, to be here with you to listen and to hear so that we may legislate effectively?” he said.

Cayetano challenged his colleagues to come up with “long-lasting and reliable solutions, programs and mechanisms to respond to calamities and disasters and not just deal with the ongoing relief operations.”

He said they needed to learn from the country’s experience from other major disasters, such as Typhoons “Yolanda,” “Sendong” and “Pablo,” and the recent earthquakes in Mindanao.

Cayetano pushed for cooperation with other government agencies in their initiatives to provide assistance to Taal victims.

“This is not a contest,” he said. “We are not going to implement a separate plan. We will have parallel efforts.”

The last to speak among the local leaders was Batangas Gov. Hermilando Mandanas, who spoke of the dire challenges facing his province.

“As of now, some 1 million have evacuated. As of now, we need P150 million worth of food every day. As of now, the livelihood destroyed has reached P5 billion,” he said.

“This is different from other calamities in the past because we have seen that of the 1 million displaced, only 20 percent or 200,000 individuals are in evacuation centers, including those in schools,” Mandanas said.

He lamented that the calamity fund for Batangas was only P200 million but the local government could only use a third of it for quick response.

After the session, Cayetano responded to criticism that the House move was just a stunt, saying they “didn’t just barge our way in.”

“First of all, we do not act without study. We didn’t just come here unannounced,” he told reporters.

The Speaker said it was only natural that out of more than 100 million Filipinos, some would have complaints, especially on social media.

“But in the leadership of the House, including the majority, if we believe it’s the right thing to do, we will do it despite the criticisms,” he said.