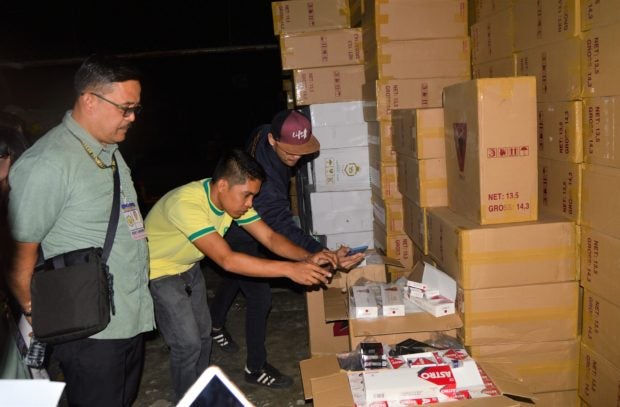 Bureau of Internal Revenue personnel check the fake cigarettes confiscated by government agents in separate raids in Barangays Cugman and Bayabas, Cagayan de Oro City on Tuesday. The seized products were presented to the media on Wednesday. PHOTO BY JIGGER J. JERUSALEM

Among the brands confiscated were YS Filter, RED, Jackpot, Bravo, Marvels, Astro, and Two Moon cigarettes, all of which did not bear the tax stamps of the Bureau of Internal Revenue (BIR), hence, were deemed illegal.

The cigarettes, with an estimated unpaid excise tax of P882 million, were seized in two separate raids in warehouses in barangays Bayabas and Cugman here, according to Lawyer Jonaidah Darimbang of the BIR Northern Mindanao’s legal department.

She said a total of P882 million, which was supposed to go to the government, were not collected by the BIR due to the illegal manufacture of the products.

Darimbang said the BIR was able to determine the cigarettes to be counterfeit.

“With the use of the BIR Taggant Reader, a device used to detect whether or not the BIR stamp is fake, various brands of cigarettes were found to have fake BIR stamps or no stamp at all,” she told reporters as the seized items were presented to the media at a storage facility in Bayabas on Wednesday.

Both the BIR and NBI have yet to identify the persons behind the illegal manufacture of cigarettes.

Darimbang said that would be their next step as they needed it to file cases against the suspect. NBI and BIR also have yet to verify if the confiscated products were made locally or in another country./lzb

ADVERTISEMENT
Read Next
Poll protest vs Northern Samar lawmaker dismissed
EDITORS' PICK
10 Filipinos positive for COVID-19 in UK, 7 in Ireland — envoy
Nograles: Cabinet members to donate 75% of monthly salary to aid COVID-19 fight
Quick chat with Nicole Andersson: ‘You really don’t need much to be happy’
IATF to LGUs: Issue ordinances vs attacks on frontliners, COVID-19 patients
Diokno to Duterte: OK to make fun of buck tooth, but focus on people’s needs first
Robredo spox thanks Duterte for defending VP’s efforts vs COVID-19
MOST READ
Coronavirus hotbed Rizal to shut borders on April 6
Gov’t mulling quarantine period extension of 15-20 more days
ADB warns PH against prolonged lockdown
Sotto on Isko Moreno’s call: We do our job without the media following our every move
Don't miss out on the latest news and information.