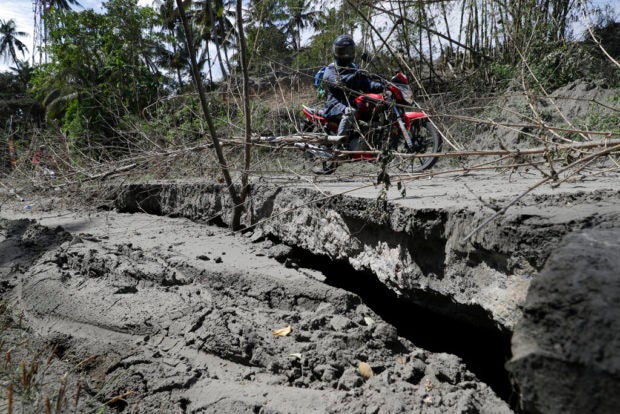 A motorcycle rider negotiates a crack on the road after Taal volcano’s recent eruption in Lemery, Batangas province, southern Philippines on Thursday Jan.16, 2020. Taal volcano belched smaller plumes of ash Thursday but shuddered continuously with earthquakes and cracked roads in nearby towns, which were blockaded by police due to fears of a bigger eruption. (AP Photo/Aaron Favila)

BATANGAS CITY, Philippines — The House of Representatives on Wednesday committed to working with concerned government agencies for the passage of the proposed supplemental budget for victims of Taal Volcano’s eruption.

During the chamber’s plenary session at the Batangas City Convention Center, House lawmakers adopted Resolution No. 662 filed on January 21, an apparent response to the call of President Rodrigo Duterte for the passage of a P30-billion supplemental budget to augment the government’s calamity fund for Taal volcano’s eruption.

“The Calamity Fund for the local government units is presently depleting and is insufficient to provide relief and rehabilitation assistance to the affected areas,” the resolution reads.

“As a response to the disaster, the House of Representatives is willing to participate in necessary efforts to alleviate the suffering of our countrymen and ultimately restore normalcy to the affected regions,” it added.

After Taal Volcano’s phreatic eruption or steam-driven episode on January 12, the Philippine Institute of Volcanology and Seismology (Phivolcs) raised Alert Level 4 over the volcano.

The eruption led to the declaration of a state of calamity in the provinces of Batangas and Cavite “with affected families finding themselves in the challenging situation of unmet vital needs such as access to food and potable drinking water, shelter and essential household items, and basic health services among others”, the resolution states.

Initial estimates from the National Development Authority (NEDA) showed Taal’s blast has caused economic losses of up to P7.63 billion while the Department of Agriculture (DA) had reported agricultural damage of P3.06 billion.

“The House of Representatives expresses its support and commitment to work with all the concerned agencies to pass the proposed supplemental budget to expedite effective and responsive to those affected bu the Taal Volcano eruption,” the resolution reads.