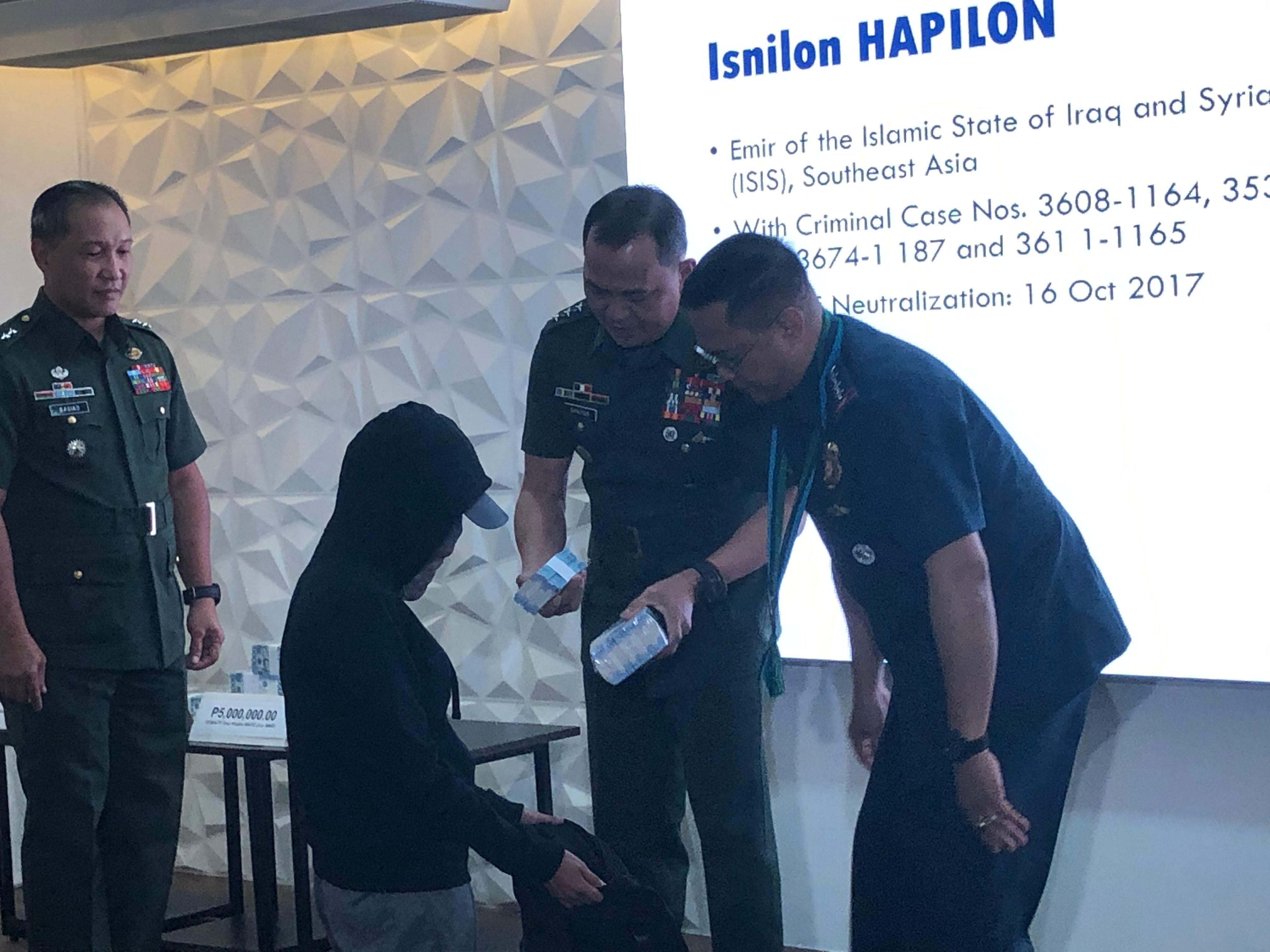 The tipster, whose face was covered and appeared to be female, was given P7.4 million for the information on Isnilon Hapilon, the Islamic State emir in Southeast Asia. Another P5 million was given to the same informant for the details on Maute leader Omar Khayam Maute.

Hapilon and Maute were killed in a joint law enforcement operation by the AFP and PNP in Marawi City in 2017. The Marawi siege, which was carried out by ISIS-affiliated militants, is said to be the biggest security crisis and the longest urban war that the Philippines had faced in recent years.

Shortly after the deaths of the two terrorist leaders, Defense Secretary Delfin Lorenzana told the media that the information that led to the killing of Hapilon and Maute were shared by a female hostage who was able to escape.

The P7.4 million reward for the details on Hapilon is on top of the $5-million bounty that the US had placed on Hapilon’s head.

Another informant at the ceremony received P600,000 for contributing information that led to the arrest of Jumar Ibrahim of the DI-Maute Group, who had been charged of kidnapping and illegal possession of hand grenade. He was apprehended by government forces in Bagong Silang, Caloocan City in December 2018.

One tipster received P600,0000 for the information that led to the death of Abu Sayyaf leader Mohammad Aklam Said, who was killed during an encounter with Army troops in Sulu in 2016.

Said was responsible for several kidnapping incidents and beheading of Philippine Marine troops in 2011.

One informant received P1.8 million for the arrest of  three Abu Sayyaf members — Bads Adjam also known as Abu Jihad; Adjid Isnani or Adjid Halik; and Adam Muhadam or Junior Hali. The three, who were wanted for various cases of kidnapping and serious illegal detention, were arrested on different operations in 2016.

Santos urged the public “to be more cooperative in sharing crucial information needed to thwart threats to our country’s peace and security.”

Gamboa, meanwhile, clarified that the cash reward was for “buying information” and “not for offering a prize for the head of these wanted terrorists.”

The AFP chief said that the monetary reward for the Marawi siege informant and the rest took more than two years before it was given because they had to make sure that the claimant was “authentic.”

“There is a joint valuation of the AFP and PNP… We just want to make sure that there will be no problems because another one might appear to assert claim. We also want to make sure on the safety of informants,” he said.

Santos also said the reward system undergoes a “process” to ensure that it goes into the pockets of informants.

Groups like Karapatan had previously accused the military and police of using the bounty system as a “money-making venture” and “organized racket.”

“Kung sino siya, it’s being processed and pine-present sa (As to the identities of the informants, we present it to) COA (Commission on Audit),” he said.