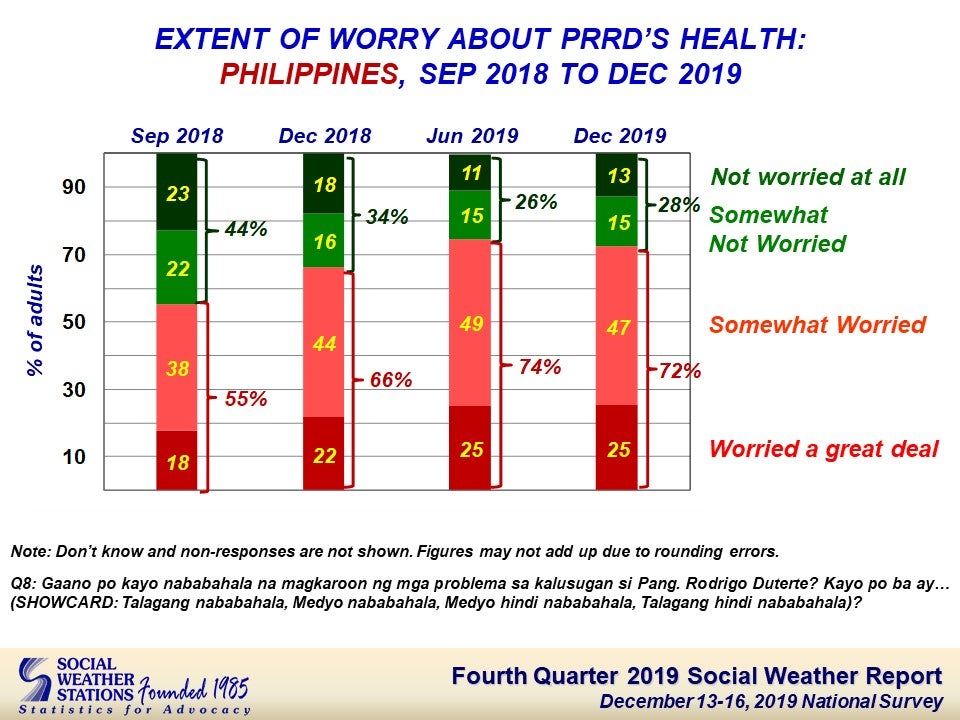 The poll said of the 72 percent, 25 percent said they worry at a “great deal” about the President’s health while 47 percent they are somewhat worried.

The SWS said this was similar to June 2019’s survey where 74 percent of Filipinos expressed worry while 26 percent were not worried about the 74-year-old leader’s health.

Meanwhile, 61 percent of Filipinos believed that Duterte’s health should be a public matter while 37 percent said the President’s health is a private matter.

[How worried are you that Pres. Rodrigo Duterte have health problems? Are you… (SHOWCARD: Worried a great deal; Somewhat worried; Not too worried or not worried at all)?]”

The SWS interviewed 1,200 Filipinos aged 18 years old and above nationwide. Of the number, 300 were interviewed in Metro Manila, Balance Luzon, Visayas and Mindanao.

The survey, conducted from Dec. 13 to Dec. 16, 2019, used sampling error margins of ±3% for national percentages, and ±6% each for Metro Manila, Balance Luzon, Visayas, and Mindanao, the SWS said.

In 2019, Duterte’s state of health became a bigger issue because of his continued absence in public events, which was heightened after a motorcycle accident on Oct. 16.