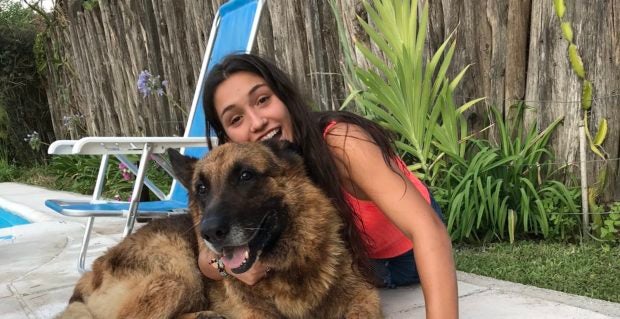 A 17-year-old girl ended up with around 40 stitches after a German shepherd bit her face during a photo shoot.

Lara Sanson, from Tucuman in Argentina, was posing with her friend’s dog named Kenai when he suddenly attacked her, as per La Nación via the Daily Mirror last Thursday, Jan. 16.

The incident was all captured on camera while the two were having a casual pictorial, as seen in Sanson’s Twitter post on Jan. 14.

Two photos first showed the teenager smiling as she put an arm around Kenai. Things quickly took a turn for the worse when the dog opened his mouth to bite Sanson’s face. The sudden attack had left wounds on the right side of the teenager’s face.

Following the attack, the report stated that Sanson had ended up with around 40 stitches after a two-hour operation. The stitches, which reached her gums, were internal and external.

Despite her injuries, the teenager said she did not feel too much pain when she was bitten nor when she left the operating room.

“I only had some bother due to the inflammation and eating problems,” Sanson was quoted as saying.

The teenager also stated that she does not know why the dog had reacted the way it did. She guessed it might be because Kenai was scared when she hugged him or due to his old age.

However, veterinarian Juan Enrique Romero stated that the dog may have bitten her due to a pain he was experiencing.

“Its pains are growing and a pain could have generated this reaction,” he said in the report.

After getting stitched up, Sanson stressed that she does not wish for Kenai to be put down. Sanson even made light of the situation and described it simply as a “photo shoot that goes wrong.” Ryan Arcadio/JB