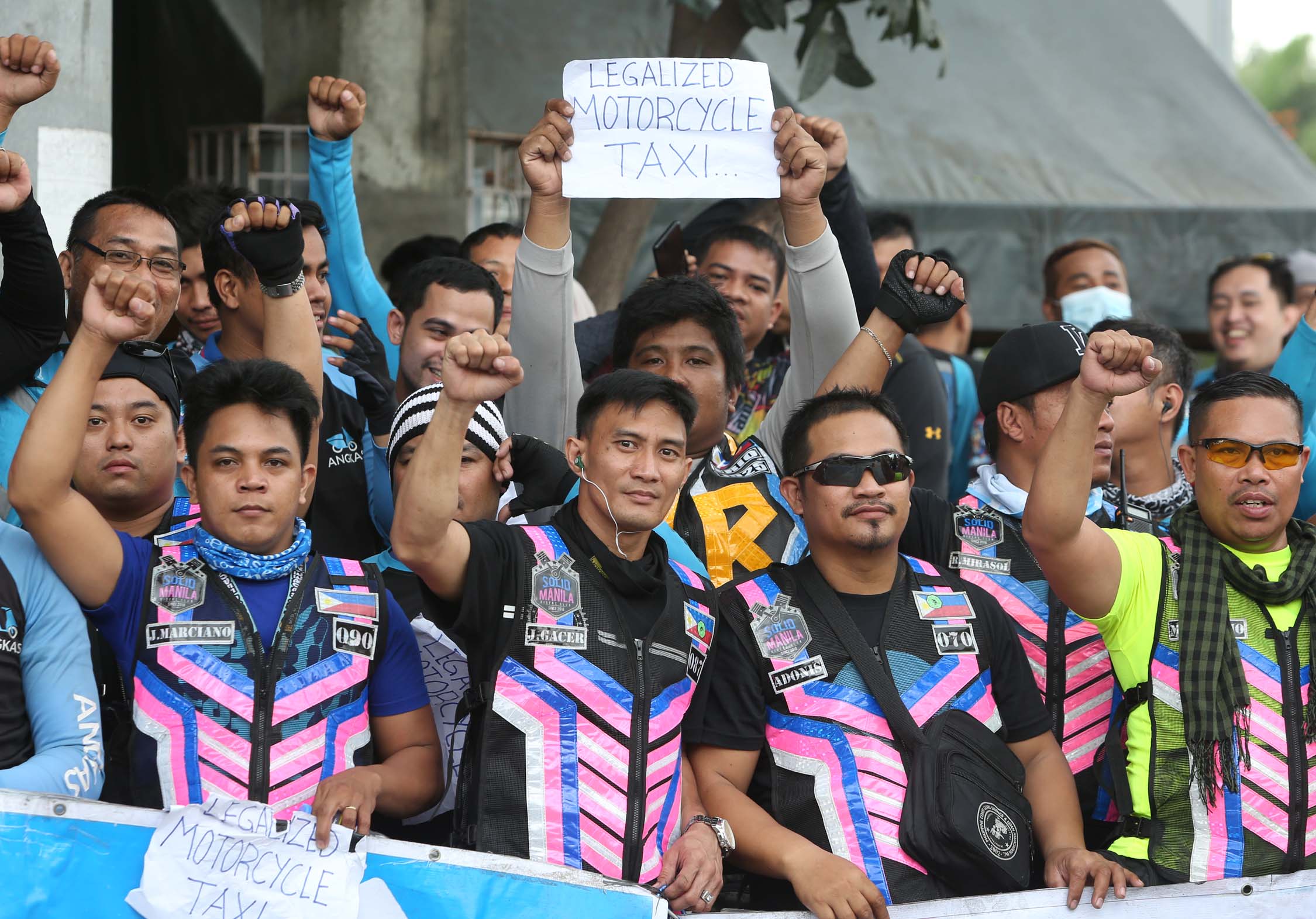 SENATE PROTEST Angkas drivers raise their fists in protest during Monday’s Senate hearing on motorcyle taxis after a member of the Land Transportation Franchising and Regulatory Board said the agency would terminate its pilot test for all motorcycle taxis next week. —MARIANNE BERMUDEZ

MANILA, Philippines — Is it goodbye for now, motorcycle taxis?

The government’s technical working (TWG) on motorcycle taxis sought the early termination of its three-month pilot study without coming to any conclusion, citing the court cases filed by pioneer Angkas against the group’s guidelines that it said prevented it from conducting an effective assessment of the mode of transportation.

The TWG also sought the blacklisting of Angkas, the dominant player in the motorcycle-for-hire business, for violating its directives.

The move drew protests and criticisms from lawmakers, who said commuters were bound to suffer.

A labor group, Defend Job Philippines, slammed what it called the “massacre” of the livelihood of up to 47,000 motorcycle taxi drivers.

The cancellation of the pilot study, which was supposed to end on March 23, would mean that the other motorcycle taxis — new entrants MoveIt and JoyRide — would be considered illegal and would be apprehended, said TWG chair Antonio Gardiola, a member of the Land Transportation and Franchising Regulatory Board (LTFRB).

The test run is aimed at determining whether motorbikes are safe for public transport.

Gardiola said the order to terminate the pilot study would be implemented in one week’s time.

“They are drawing their authority to run motorcycle [taxis] because of the study,” Gardiola told reporters at the Senate, pointing out that the law still bars motorcycles from being public utility vehicles.

There is big demand for motorcycle taxi service in Metro Manila, where commuters often spend three to four hours daily on the road while taking traditional public transport to get to work and home due to severe traffic congestion. Motorcycle taxis provide faster transport in the metropolis and in Cebu City because they can weave in and out of traffic.

Gardiola said the actions of Angkas, which had questioned in court the 10,000 cap on its riders, were anchored on economics, but the TWG was focused on safety.

Because of the cases filed by Angkas, the TWG could not be able to collect proper data, he added.

“They are resorting to legal rigmarole in this situation. They filed a case that impeded the study. We can’t gather data because of the actions taken by one player, so it’s better to terminate it,” he said.

But senators quickly assailed the TWG move, saying the group should continue to do its job and conduct the assessment since the data were necessary for Congress to write laws on motorcycle taxis.

Moreover, putting a stop to the operation of motorcycle taxis would lead to the suffering of a lot of commuters who are struggling with the country’s poor public transportation system, the lawmakers said.

Gardiola said he would convene the TWG and advise Transportation Secretary Arthur Tugade about the senators’ call.

Sen. Christopher Go, who met with protesting Angkas drivers outside the Senate, said he had asked Tugade and

LTFRB Chair Martin Delgra not to stop the pilot study and to talk with the motorcycle groups.

The officials agreed not to arrest motorcycle taxi drivers, Go said, adding that he would also bring the matter to the President’s attention.

Sen. Grace Poe, who chairs the public services committee that had a scheduled hearing on motorcycle taxis on Monday, described the TWG’s decision as a case of tit for tat because of Angkas’ suit against its guidelines.

Poe warned that she would ask the private sector to file more cases against the TWG as its decision was unjust, given that it would deprive people of something they badly need. But she also said the motorcycle taxi companies should refrain from filing court cases.

“It’s very arbitrary. It’s not based on reason, but based on what they want to do. It’s very wrong,” she told reporters.

She said she was dismayed that some government officials work in this manner. “They’re full of vengeance. Their competence to head this program should be questioned.”

She did not buy the TWG’s excuse that it was finding it hard to collect safety data. Similar information is available from the Philippine National Police and the Metro Manila Development Authority, she said.

Senate President Pro Tempore Ralph Recto also said the TWG was angry because a temporary restraining order (TRO) was issued against it, but he noted that the group did not conduct enough public consultations.

Angkas spokesperson George Royeca said the company and the TWG had agreed after the Senate hearing to meet to talk things over.

Royeca also said Angkas’ only issue was about the cap on its drivers and expressed openness to withdrawing the cases the company had filed against the TWG.

“If we can resolve that, then there should be no issue on any court cases or any type of other issues at all,” he told reporters.

In recommending the blacklisting of Angkas, the TWG said the company had “blatantly exhibited defiance on mandated guidelines.”

The TWG listed the obstacles it encountered in the pilot study, such as Angkas’ rallies protesting the cap on drivers, social media statements disparaging the TWG, and the court cases that resulted in the issuance of a TRO on the driver cap.

It blamed Angkas’ actions for its failure to execute its plan to deploy mystery passengers that will check the participants’ compliance with the guidelines, to conduct field survey operations to gather data on passenger feedback, to inspect facilities and operations of participants in Metro Manila and Cebu, and to verify, assess, review and audit the training programs of the companies.

JoyRide told the Inquirer that it was hopeful the TWG would reconsider its decision.

“We understand where the TWG is coming from, but we’re hoping they can still decide on this favorably,” said Joyride spokesperson Noli Eala. “Not only for Joyride and all the other operators, but more so for the commuters who rely on us.’’

In the House of Representatives, Muntinlupa Rep. Ruffy Biazon reminded transport officials that they should come up with solutions to the public’s transportation needs. “The sudden suspension is not a solution. It exacerbates the problem,” he said.—With reports from Matthew Reysio-Cruz and DJ Yap

Neda chief to push for ‘modified lockdown’ in Luzon