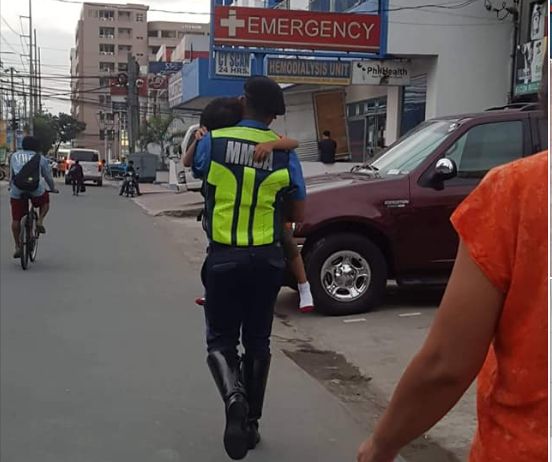 MANILA, Philippines — A traffic enforcer of the Metropolitan Manila Development Authority (MMDA) carried a sick boy to the hospital when the car rushing the child was stuck in traffic.

In a Facebook post, Mit Javellana, the mother of the child, said that her son was having chills due to high fever and they were trying to get out of the heavy traffic.

When the MMDA traffic enforcer, who was later identified as Jeremi Lukban, approached the car and learned of the emergency situation, Javellana said Lukban volunteered to carry the child and take him to the hospital on foot.

(The MMDA enforcer saw that our car was trying its way out of the traffic tangle. When he realized that it’s an emergency case, he offered to carry Earl to hospital. Thank you very much.)

“Salamat sa pagtugon sa tungkulin nang buong puso. Hanga at saludo kami sayo! (Thank you for responding to your duty. We are in awe of you),” Lim wrote.

(Don’t hesitate to approach MMDA enforcers or call the MMDA hotline 136 in case of an emergency situation on the road. We are ready to help.)