ST. JOHN’S, Newfoundland – Canada’s federal government was mobilizing the Armed Forces Sunday to help Newfoundland and Labrador dig out from the monster blizzard that paralyzed eastern regions of the province with record-breaking amounts of snow and as forecasts call for more. 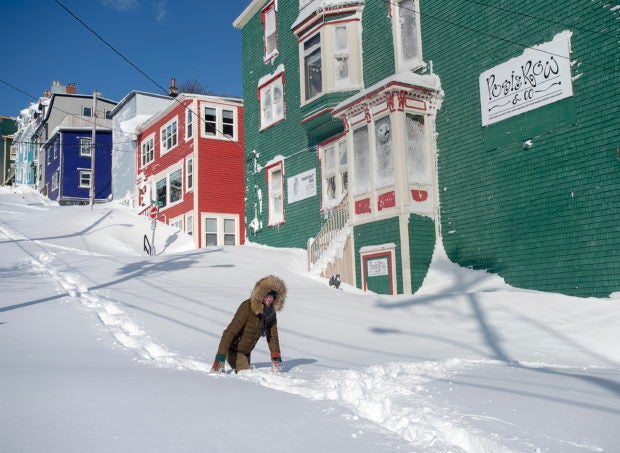 A residents makes their way through the snow in St. John’s, Newfoundland on Saturday, Jan. 18, 2020. The state of emergency ordered by the City of St. John’s is still in place, leaving businesses closed and vehicles off the roads in the aftermath of the major winter storm that hit the Newfoundland and Labrador capital. (Andrew Vaughan/The Canadian Press via AP)

Newfoundland Premier Dwight Ball asked for Ottawa’s help on Saturday, and Minister of Natural Resources Seamus O’Regan said the federal government was working to deploy all available resources on the ground in St. John’s.

No details were immediately announced, however O’Regan said that ensuring access to the city’s main hospital would be a top priority.
Canadian Armed Forces Operations said they hoped to arrive as early as Sunday to help the affected communities.

Their expected tasks will include assisting with snow removal, providing transportation to warming or emergency centers and ensuring the elderly and those with health concerns are cared for.

Meanwhile, a search resumed for a man who went missing during the weekend storm, with the Royal Canadian Police asking people in the area of Roaches’ Line to check sheds, vehicles and other structures on their properties in case 26-year-old Joshua Wall had taken shelter there.

As the plowing, shoveling and snow blowing went on, states of emergency that were declared Friday in St. John’s and several nearby communities remained in effect.

Some other decrees were lifted Saturday, including the town of Bonavista north of the Avalon Peninsula, though the town still advised residents to avoid unnecessary travel.