On the edge of America, census begins in a tiny Alaska town

TOKSOOK BAY, Alaska – There are no restaurants in Toksook Bay, Alaska. No motels or movie theater, either. There also aren’t any factories. Or roads. 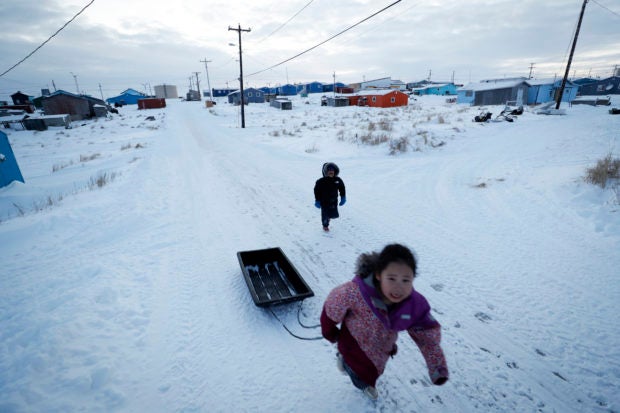 Children play in the snow Saturday, Jan. 18, 2020, in Toksook Bay, Alaska. The first Americans to be counted in the 2020 Census starting Tuesday, Jan. 21, live in this Bering Sea coastal village. The Census traditionally begins earlier in Alaska than the rest of the nation because frozen ground allows easier access for Census workers, and rural Alaska will scatter with the spring thaw to traditional hunting and fishing grounds. (AP Photo/Gregory Bull)

But the first Americans to be counted in the 2020 census live in this tiny community of 661 on the edge of the American expanse.

Their homes are huddled together in a windswept Bering Sea village, painted vivid lime green, purple or neon blue to help distinguish the signs of life from a frigid white winterscape that makes it hard to tell where the frozen sea ends and the village begins.

Fish drying racks hang outside some front doors, and you’re more likely to find a snowmobile or four-wheeler in the driveway than a truck or SUV.
In this isolated outpost that looks little like other towns in the rest of the United States, the official attempt to count everyone living in the country will begin Tuesday.

The decennial U.S. census has started in rural Alaska, out of tradition and necessity, ever since the U.S. purchased the territory from Russia in 1867.

Once the spring thaw hits, the town empties as many residents scatter for traditional hunting and fishing grounds, and the frozen ground that in January makes it easier to get around by March turns to marsh that’s difficult to traverse.

The mail service is spotty and the internet connectivity unreliable, which makes door-to-door surveying important.

For those reasons, they have to start early here.

The rest of the country, plus urban areas of Alaska such as Anchorage, will begin the census in mid-March.

Some of the biggest challenges to the count are especially difficult in Toksook Bay, one of a handful of villages on Nelson Island, which is about 500 miles (805 kilometers) west of Anchorage and only accessible by boat or plane.

Some people speak only Alaska Native languages such as Yup’ik, or speak one language but don’t read it.

The U.S. census provides questionnaires in 13 languages, and other guides, glossaries and materials in many more. But none is one of 20 official Alaska Native languages. So local groups are bringing together translators and language experts to translate the census wording and intent so local community leaders could trust, understand and relay the importance of the census.

It wasn’t an easy task. Language can be very specific to a culture.

For example, there’s no equivalent for “apportionment” — the system used to determine representation in Congress — in the language Denaakk’e, also known as Koyukon Athabascan. So translators used terms for divvying up moose meat in a village as an example for finding cultural relevancy, said Veri di Suvero, executive director of the agency partner Alaska Public Interest Research Group.

When the official count begins this week, the Census Bureau has hired four people to go door-to-door. At least two of them will be fluent in English and Yup’ik.

Places such as Toksook Bay that run this risk of being under-counted also desperately need the federal funds assigned based on population for health care, education and general infrastructure.

Yet mistrust of the federal government is high. That’s true in many parts of the U.S., but especially in Alaska, where many have strong libertarian views, and even more in a rural community where everyone knows everyone, and someone asking for personal information is seen with suspicion.

“The No. 1 barrier to getting an accurate count throughout Alaska is concern about privacy and confidentiality and an inherent distrust of the federal government,” said Gabriel Layman, chairman of the Alaska Census Working Group. “And that attitude is fairly pervasive in some of our more rural and remote communities.”

The census is entirely confidential, Layman reassures people, and the Census Bureau can’t give information to any law enforcement, immigration official to even to a landlord if you report if you have 14 people living in your rental. Violating that privacy could land a Census worker behind bars with a hefty fine.

When the count begins on Tuesday, a Yup’ik elder who is part of a well-known Eskimo dancing group will be the first one counted.

Lizzie Chimiugak, whose age isn’t known because records weren’t kept but is anywhere from 89 to 93, is “the grandma for the whole community,” said Robert Pitka, the tribal administrator of the Nunakauyak Traditional Council in Toksook Bay.

Steven Dillingham, the director of the U.S. Census Bureau, will be on hand for Tuesday’s start.

Village officials will greet him at the town’s airstrip and bring him to the school, where community members will bring traditional food, which could include seal, walrus, moose or musk ox.

They’ll have a ceremony with the dance group that includes Chimiugak, who will come to the school and dance in her wheelchair if the weather allows.

Mary Kailukiak, a town councilwoman, said she’s one of the cooks.

“I’m thinking of maybe cooking up dried fish eggs, herring fish eggs,” she said, pausing to speak to a reporter while ice fishing for tomcod and smolt on the Bering Sea, dressed in a black parka and snow pants and sporting a hat made by her daughter from sealskin and beaver. The eggs will be soaked overnight and served with seal oil.

Then Dillingham will conduct the first official census count, or enumeration as it known, with Chimiugak, out of earshot of others to satisfy federal privacy laws.

Pitka is hoping for nice weather — it’s been as cold as -20 Fahrenheit (-29 Celsius) lately — as the nation’s eyes turn west for the event: “It’s going to be a very special moment.”

Simeon John, who leads a youth suicide prevention group, stood before about 120 people at the end of the Sunday service at St. Peter the Fisherman Catholic Church. In Yup’ik, he told parishioners to expect strangers in town this week and why.

Beyond helping prepare for Tuesday’s kickoff, he also encouraged them to take part in the census when a worker knocks on their door.
“That was one of the reasons why we encourage people to participate in as much as we can because of the benefits that we will be getting,” said John, a community census helper.

Responses in the 2020 census could help residents in the future get improvements to the water facility, airport, port and even roads.
Besides announcements at church services, community leaders will repeat the same message this week to townspeople over marine VHF radio and through more modern means, including texting.