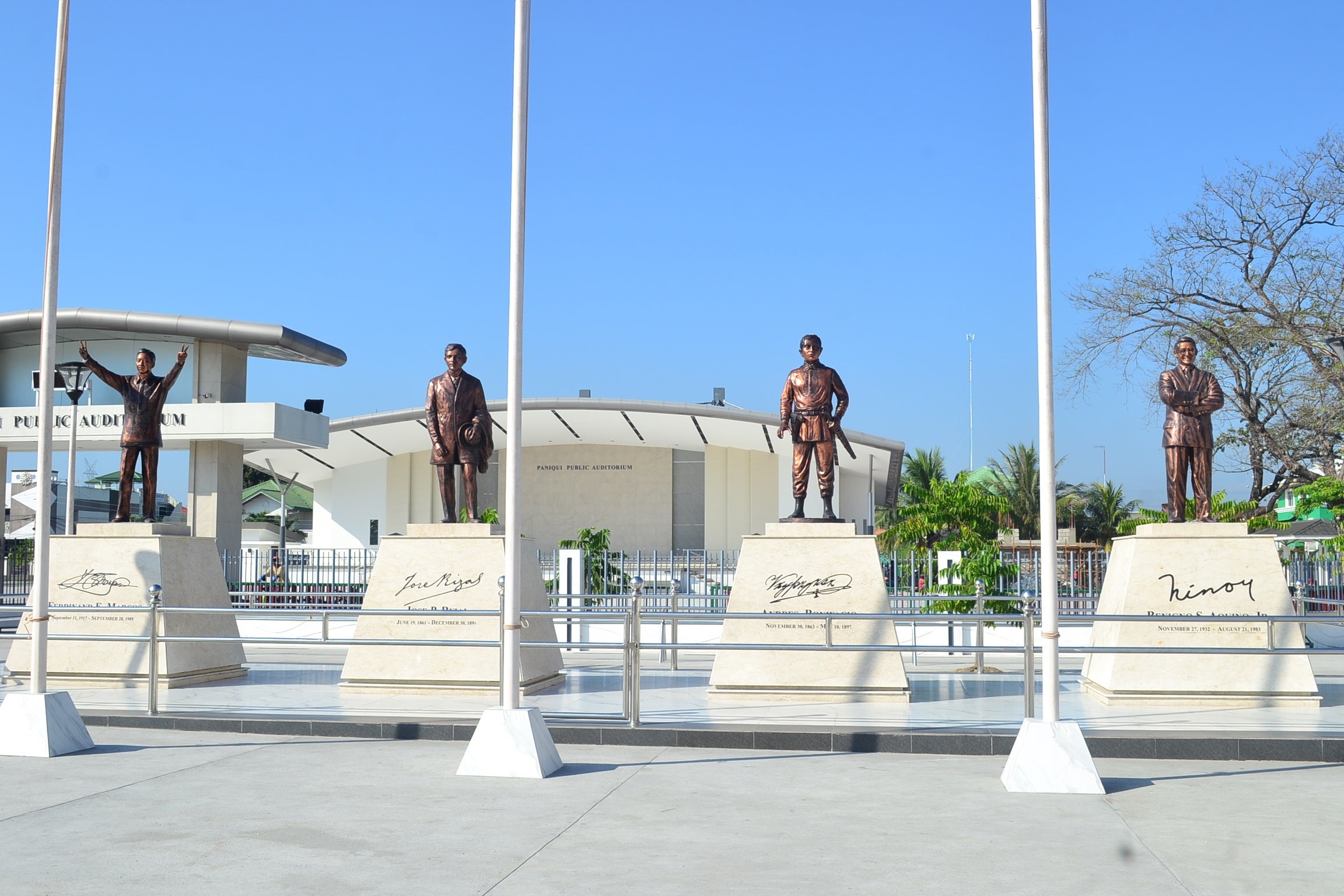 PUBLIC CURIOSITY The monument of dictator Ferdinand Marcos (left) standing several meters away from that of his political rival, former Sen. Benigno Aquino Jr., has aroused the curiosity of people visiting the plaza at Paniqui, Tarlac province. —MARIA ADELAIDA CALAYAG

PANIQUI, Tarlac, Philippines — A statue of the late dictator Ferdinand Marcos, which was put up last year near that of his assassinated political rival, former Sen. Benigno ”Ninoy” Aquino Jr., here has aroused the public’s curiosity despite efforts by the local government to play down conjectures about the odd pairing at the town’s newly renovated plaza.

“To some, it is strange that there would be a Marcos monument in Ninoy Aquino’s province, much less Paniqui where a branch of the family of his in-laws, the Cojuangcos, hailed and made their fortune,” said historian Michael Charleston Chua.

The monument of Marcos, posed with its hand raised to flash the “victory” sign, was installed in August 2019.

The statue of Aquino was fashioned after his popular photograph showing him beaming wide, with his arms folded.

Between them are the statues of Dr. Jose Rizal, the national hero, and Andres Bonifacio, the Katipunan founder.

Paniqui Mayor Leonardo Roxas said the Rizal and Bonifacio statues were installed between those of Marcos and Aquino because the local government feared that these had divided Tarlac residents, who trace their roots to Pampanga and Ilocos Norte provinces.

“Northern Tarlac, which included Paniqui, was the site of an Ilocano migration. So you have Ilocano-speaking Tarlaqueños who admire the son of Batac (in Ilocos Norte), Ferdinand Marcos. It seems that the good mayor wanted to build a symbol of unity for both camps,” Chua said.

He added: “But notwithstanding the good intentions of the mayor and the fact that they placed the statues [alongside] the fathers of our nation — Rizal and Bonifacio — or whether a law was violated or not, the heart of the argument really is how do you define ‘kabayanihan’ (patriotism) now.”

According to Chua, a hero in the Filipino perspective “is a person who gives service to the people without expecting any¬thing in return.”

“Do we now consider leaders who — sure — have done much projects that benefited the people but which also benefited them, be considered a ‘bayani’ (hero)?” Chua said.

“Ninoy’s statue was commissioned by my father in 1987 … while the statues of Bonifacio and Rizal were repaired because the features of the original statues were worn out,” Roxas said.

“My dream is for Ninoy’s statue to be put up also in Batac, so the enmity between the two families would end,” he said.

Many scholars have cited accounts about the little discussed relationship between Aquino and Marcos, who were members of the Upsilon Sigma Phi fraternity at the University of the Philippines, and who might have been good friends.

Aquino was one of the first politicians to be arrested after Marcos declared martial law on Sept. 21, 1972.

Upon his return from exile in the United States, Aquino was assassinated on Aug. 21, 1983, on the tarmac of the Manila International Airport, now named after him. His death sparked large protests that culminated in the ouster of Marcos in February 1986 and the installation of his widow as President of the republic.