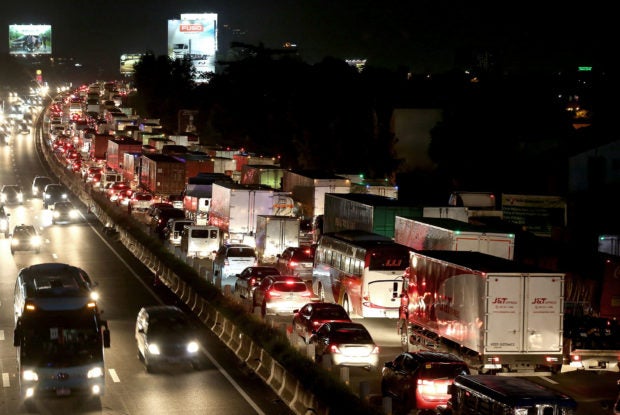 TOLL HOLIDAY SOUGHT SMC Tollways has been asked to waive the toll for private groups and persons delivering assistance to evacuees in Batangas province. —RICHARD A. REYES

MANILA, Philippines — The tollway operator in charge of three expressways linking Metro Manila to Batangas province was asked on Sunday to waive all toll for private groups and individuals delivering relief goods to eruption victims, whether or not prior coordination was made.

Labor group Defend Job Philippines denounced San Miguel Corp. (SMC) Tollways’ policy of requiring that a request for toll exemption be sent first to SMC Tollways president Manuel Bonoan, saying it was an unnecessary and time-consuming task especially amid the urgency of the situation in areas near Taal Volcano.

“They might say it’s just a letter, but it could deter simple efforts, especially those not coming from big companies,” Defend Job spokesperson Christian Lloyd Magsoy told the Inquirer. “We are just asking SMC to be humane.”

Members of Defend Job, along with several transport network vehicle services (TNVS) groups, were on the South Luzon Expressway (SLEx) on Sunday, hoping to deliver assistance to evacuees. Their caravan of 40 vehicles full of relief goods, however, was asked to pay toll, Magsoy said.

“We suggest that the SLEx administration craft procedures or mechanisms to check whether vehicles are indeed carrying relief goods, like a quick inspection at the toll gate,” Magsoy said. The group contended that this would be easier than the current need for prior coordination.

Earlier, SMC Tollways said it would waive the toll for private persons and organizations carrying relief goods for Taal evacuees provided they first send an email to Bonoan at [email protected] or [email protected]

Marlene Ochoa, head of the company’s corporate communications, said that donors should indicate in their request the following information: items to be donated (food, medicine, clothes, etc.), destination in Batangas province, date and estimated time of travel, vehicle information and plate number, and the person to be contacted.

The exemption, however, would apply only to southbound cars on Skyway, SLEx and Star Tollway on the date indicated in the email.

The toll-free travel will be in effect indefinitely while relief operations for eruption victims are ongoing, SMC Tollways said.

At the moment, only marked government vehicles are allowed free entry and exit on the three expressways managed by the company.

The TNVS caravan that included Laban TNVS, Metro Manila Hatchback Community, Lawyers for Commuters’ Safety and Protection, Quezon City Anti-Corruption Commission and Owto, was headed for San Luis municipality where there were around 10,000 individuals affected by the eruption. Focused on profits

“Instead of encouraging the spirit of ”˜bayanihan’ amongst Filipinos in this time of disaster, the SLEx seems to be more focused on how to maximize the bulk and rush of private efforts utilizing their private roads to generate huge profits for their company,” Defend Job said in a statement.

It called on SMC to “moderate its greed for profit amid the massive relief operations being conducted by private individuals and groups for victims of the Taal Volcano eruption.”Magsoy said that SMC should keep the fees for those with humanitarian aid scrapped until residents of Batangas had “totally recovered.”