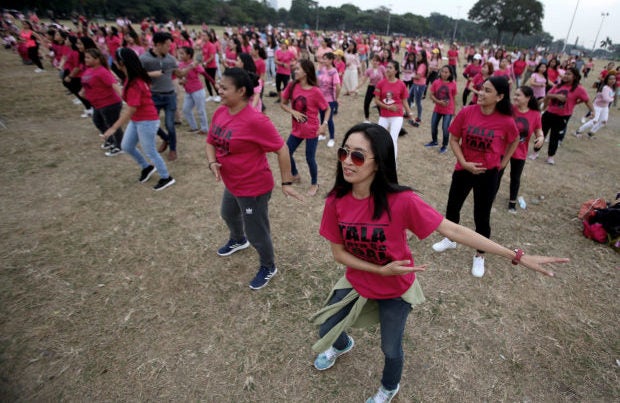 MANILA, Philippines — The idea was irresistible: Show off your dance moves, be part of a viral craze, and donate to Taal evacuees.

So it came as no surprise when hundreds of men, women and children trooped to Rizal Park on Saturday to dance to the insanely popular “Tala” song by pop star Sarah Geronimo to raise funds for families displaced by the eruption of Taal Volcano.

For P100, participants and Geronimo fans who call themselves Popsters, could join the Tala for Taal flash mob at Rizal Park, with the money donated to the chosen charity, the Philippine Red Cross.

The response was overwhelming, Juanico said, with more than 600 people registering for the event, and pledges of P1000 and P5000 swelling the final donation to P60,000, according to organizers.

The 2016 Geronimo song, whose recent resurgence pushed it into the Billboard World Digital Song sales chart, became popular when a number of Tiktok and Twitter users uploaded videos of themselves dancing to it.

But “Tala” became viral when a clip sometimes described as “Tala resistance” was posted on social media. The clip showed a group of young people who wanted to play volleyball on the front yard of a certain “Aling Nelia.” When the woman called the cops on them, the group defiantly danced to the “Tala” song. The song has since become an Internet staple.

Among those who joined the Luneta dancefest was Claud Segfried Ramos, who wore a pink sequinned jacket to the event, and friends Azhley Isarena, 11, Fiona Tan, 12 and Jadidah Lao, 10, whose parents brought them to the event.

Zumba seniors Edna Abileda, 65, and Bising Cebrano, 69, came all the way from Rizal, while dance instructor Lance Daniele Turallo, 18, proved once more that “Dance is universal, regardless of race, age, or gender.”