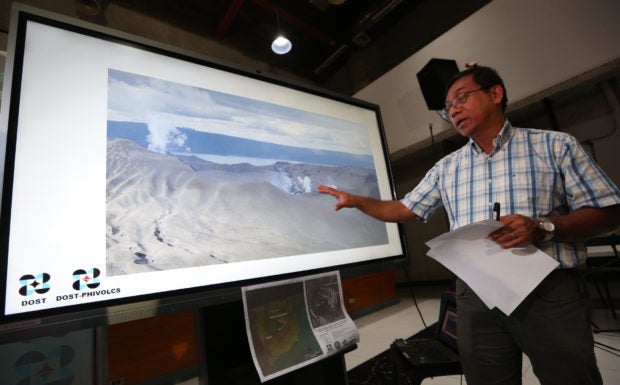 Science Undersecretary Renato Solidum, director of the Philippine Institute of Volcanology and Seismology (Phivolcs), take turns to keep the public abreast of developments at Taal Volcano at daily press briefings since it erupted on Jan. 12. Phivolcs is trying to balance the public’s need to understand volcanic activities in layman’s terms and the precision and accuracy required by scientists to communicate observed changes in volcanic phenomena. (Photo by NIÑO JESUS ORBETA / Philippine Daily Inquirer)

MANILA, Philippines — When the picturesque Taal Volcano suddenly rumbled to life last weekend, it did not only spew plumes of ash and steam but also caused the explosion of seemingly alien words that left many scratching their heads.

Terms like “phreatic eruption,” “tephra fall” and “base surges” were quickly tossed around, and most people, worried about their safety, scrambled to try to know what they meant.

“When news organizations started releasing updates about the Taal eruption, I had to search for most of the terms online,” said Bryan Gonzales, who works as a policy officer for a civil society group.

“These were not terms I could easily visualize,” he added.

In a way, Gonzales was worried.

“It was reminiscent [of] Supertyphoon ‘Yolanda,’ [international name: Haiyan] [when] people were not fully aware of what storm surges were… As a result, people underestimated these and many lives were lost.”

He wasn’t the only one unfamiliar with the terms.

In the past seven days since Taal erupted, social media feeds were filled with questions about the definitions of technical and scientific terms, especially those used by the Philippine Institute of Volcanology and Seismology (Phivolcs) in its bulletins.

Some demanded, even angrily, that what must have been gobbledygook to them be translated to Filipino and other local languages, while others wanted a more layman’s explanation of what was happening to Taal.

The challenge of simplifying the vocabularies in communicating scientific materials and disaster risks has opened up discussions here and abroad. While using scientific terms are required for accuracy, which is much-needed in decision making, it could also leave the general public lost in translation regarding their importance.

The rapid dissemination of information to a public with varying levels of understanding can really be challenging, especially when so many developments are coming in, said Mylene Villegas, chief of Phivolcs’ Geologic Disaster Awareness and Preparedness Division.

That situation is made more complicated by the lack of experiential knowledge by many Filipinos who, despite living within the Pacific “Ring of Fire,” are often more familiar with earthquakes, which can happen more frequently, than volcanic activity.

But Phivolcs has decided to retain the terms it uses, hoping that the public will eventually “adopt” them, Villegas said.

For instance, the word “lahar,” which refers to the flowing mush of water and volcanic materials, was not a household term—until the eruption of Mt. Pinatubo in 1991 had pushed it into public consciousness.

Phreatic eruption (a steam-driven explosion that occurs when hot volcanic materials come in contact with water) and pyroclastic flow (superheated clouds of volcanic ash, gases, rocks and boulders often seen rolling at high speed down the slopes of an erupting volcano) have been around for some time now, she said.

Tephra falls are volcanic rock fragments of various si­zes that are ejected during an eruption and then fall from the sky.

A base surge is a type of pyroclastic flow that can travel horizontally and cross the lake toward Taal’s shores.

People living in areas close to volcanoes are often more familiar with these terms than those outside the shadow of a potential volcanic disaster.

Such proximity to danger has allowed the residents to develop their own language. In the Bicol region, where the Mayon Volcano is located, pyroclastic flow is locally known as “uson.”

Residents living on Volcano Island have their own word for Taal’s earthquakes: “burog.”

“When the residents in ‘Pulo’ (local name for the Volcano Island) felt the burog, they knew what was happening and they knew it was time to evacuate,” Villegas said.

Their knowledge and quick response, coupled with Phivolcs’ consistent monitoring and updates of the escalating events, resulted in zero deaths from the Jan. 12 eruption.But Villegas said the solution to the tricky vocabulary might rest on the basic need for the public—and even government officials—to actually understand science, geography and history, core subjects that were already included in our school curriculum.

Taal’s eruption has provi­ded a quick geography lesson for many Filipinos who have mistaken Binintiang Malaki for the crater that erupted. Binitiang Malaki is just one of the volcano’s many craters and its prominent conical shape can be seen from Tagaytay Ridge.

Villegas said being equipped with knowledge and understanding would also prevent panic, as seen when some people hoarded face masks even though they were not affected by Taal’s ashfall.

There could be changes soon. Under the K-12 basic education curriculum, disaster readiness and risk reduction are among the core subjects for senior high school students.

Phivolcs is also conti­nuously implementing its yearly seminar and training on volcanoes and earthquakes for teachers, particularly those handling science subjects and disaster awareness in their schools.

Villegas said their team had also been visiting communities near volcanoes and other areas prone to disasters to conduct lectures and provide reference materials.

Taal’s unrest has given the team an endless stream of lessons to adapt to the public’s hunger for information from Phivolcs, she said.

Phivolcs has retained the technical terms, but beyond the usually long and wordy bulletins, they now include images and infographics on their social media pages that explain—in both English and Filipino—the definitions of these seemingly big words.

These have received po­sitive responses, plus praises and thanks for Phivolcs’ work.

“The information is actually out there, they just need to seek it out,” Villegas said. “We need to work together and use the technologies that we have at hand.”

Read Next
Sending in the clowns – and counselors – for kids who fled volcano
EDITORS' PICK
EuroMillions Superdraw: A lottery draw unlike any other is coming to the Philippines
Military on heightened alert in Maguindanao after BIFF attacks
Smart releases Hyun Bin’s second TVC
Water remains our saving grace right now
Give anti-terror law a chance, ditch misinformation – Defense Sec. Lorenzana
For nation’s birthday, Trump slams the enemies within
MOST READ
NAIA Terminal 3 to open for international flights starting July 8
Hyun Bin: ‘I will meet with my Filipino fans first’
BI officers sacked for ‘fictitiously’ encoding Wirecard COO’s entry to PH
Anti-Terrorism Council’s first move: Make a list
Don't miss out on the latest news and information.