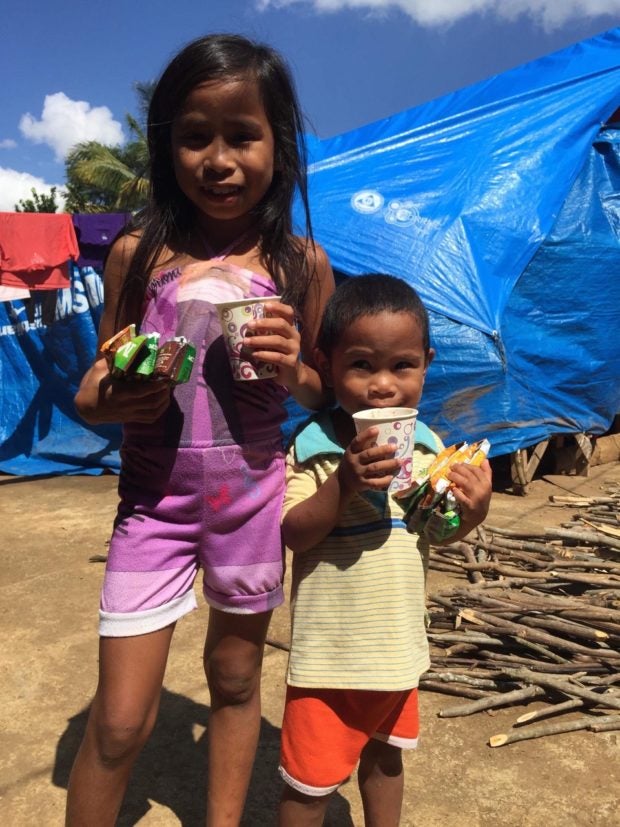 The beneficiaries of Mingo meals after the earthquakes in North Cotabato. Contributed photo

BACOLOD CITY—A fun run will be held on Sunday to raise funds for instant meals intended for evacuees of Taal Volcano.

Dubbed as “A Run for Taal,” the proceeds would be used to produce Mingo meals — a nutritious instant complementary food made of rice, mongo (mung beans), and malunggay (moringa) and produced by Negrense Volunteers for Change (NVC).

“For every kilometer run, one Mingo Meal will be given to a child affected by the Taal eruption. Participants can run anytime and anywhere, they just need to post their proof of mileage with the hashtag #MikelLovinaJamborun2020 on Facebook or Instagram,” NVC president Millie Kilayko said.

Photos of the runners’ mileage during Sunday’s run recorded on their watches or mobile phones should be included in their post, along with the hashtag #MikelLovinaJamborun2020, Kilayko said.

The Mikel Lovina Jamborun is a 23-kilometer run that commemorates the passing of Mikel Lovina, who was only 18 when he died in a car accident.

Lovina’s family, who are Negrenses, will fund the Mingo Meals earned by the runners for the cause.

Started as a family fun run in 2013, it has become a yearly tradition and has now evolved into a fundraising event for charity through its partnership with NVC Foundation.

Kilayko said two months ago when earthquakes shook North Cotabato, they were able to feed 170,000 Mingo meals to displaced children because of the generosity of friends and strangers.

On Sunday, citizens from North Cotabato will run to raise Mingo meals for children like their own, this time displaced by the eruption of Taal Volcano , she said.

The will join the #MikeLovina Jumborun2020” where every kilometer they will run will be converted into one Mingo meal for a child of Taal, she said.

“Love and gratitude can’t get better than this,” Kilayko said.