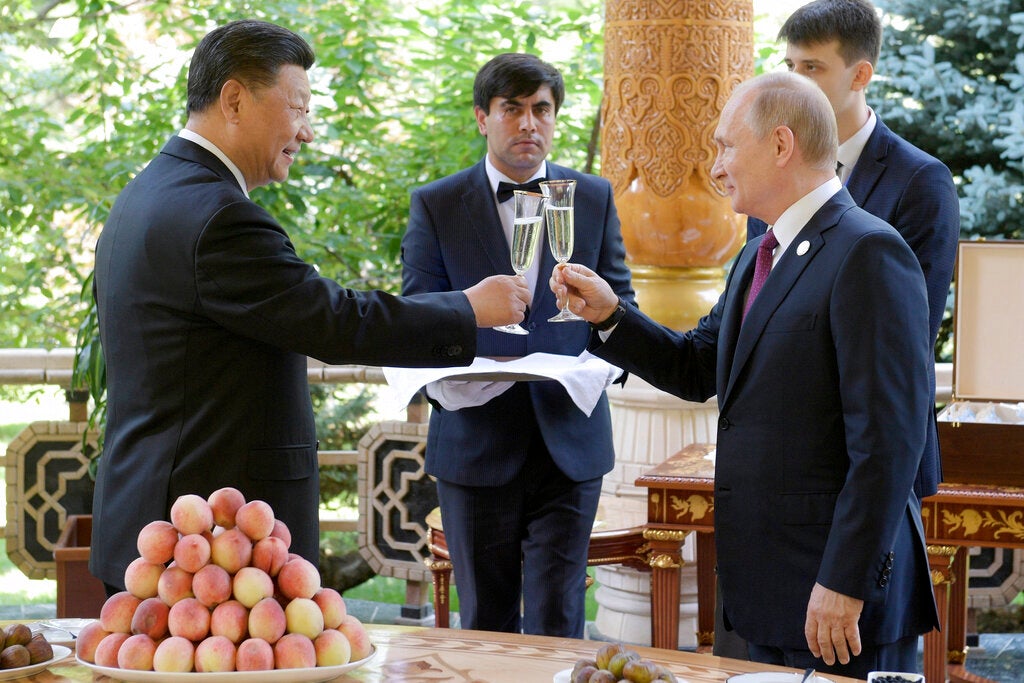 MOSCOW — Russia’s Vladimir Putin and China’s Xi Jinping have established themselves as the world’s most powerful authoritarian leaders in decades. Now it looks like they want to hang on to those roles indefinitely.

Putin’s sudden announcement this week of constitutional changes that could allow him to extend control way beyond the end of his term in 2024 echoes Xi’s move in 2018 to eliminate constitutional term limits on the head of state.

That could give them many more years at the helm of two major powers that are frequently at odds with Washington and the West over issues ranging from economic espionage and foreign policy to democracy and human rights.

Both moves reflect their forceful personalities and determination to restore their countries to their former glory after years of perceived humiliation by the West. They also mesh with a trend of strong-man rulers taking power from Hungary and Brazil to the Philippines.

Russia and China are on another level though when it comes to influencing international events — China through its economic might and rising military, Russia through its willingness to insert itself into conflicts such as the Syrian one and to try to influence overseas elections through misinformation or make mischief through cyber attacks.

Putin “believes that Russia is more powerful today than it has been since the end of the Cold War, including in places such as the Middle East,” said Ramon Pacheco Pardo of the Department of European & International Studies at King’s College London. “Thus, it is a good time to remain in power and use this power.”

How much of a challenge he and Xi are to Western models, values and multiparty democracy depends on where you sit. The China-Russian model inspires emulation among some in both smaller powers and major nations. President Donald Trump has praised both Xi and Putin, even while the U.S. battles their countries for economic and strategic dominance.

China touts its authoritarian system as providing the stability and policy continuity that has made it the world’s second-largest economy and pulled some 700 million people out of extreme poverty. Many Russians have backed Putin for standing-up to the West and improving their quality of life following the chaos after the fall of the Soviet Union.

“Political competition between different systems of governance in the world is nothing new,” said the European Union’s ambassador to China, Nicolas Chapui. “I feel that we need to feel confident on our principles, our values, our governance system.”

In both their cases, Putin and Xi reflect the tendency of authoritarian leaders to hang onto power for as long as possible and to “die with their boots on,” said David Zweig, professor emeritus of social science at the Hong Kong University of Science and Technology.

“Very few authoritarian leaders give up power, always convinced that only they can save the country, which also justifies and makes their hunger for power morally correct,” Zweig said.

For all their similarities, Xi, Putin and the systems they run have distinct features. Xi has repeatedly cited the fall of the former Soviet Union as a cautionary tale, saying its leaders failed to firmly uphold the authority of the ruling Communist Party.

China’s ruling communists have crushed all opposition and are tightening their hold on the economy and what remains of civil society, all while projecting an exterior image of seamless unity around Xi.

Russia at least maintains some of the forms if not the functions of a multiparty democracy, even as Putin, the security services and the oligarchs who run the economy call the shots.

Blunt attempts to single-handedly run the country are often met with large-scale protests — like in 2011-2012, when tens of thousands of people took to the streets following Putin’s announcement to return to the presidency for the third time and reports of mass rigging of a parliamentary election.

And while Putin managed to suppress the opposition with draconian anti-protest laws, crippling fines and arbitrary arrests, people’s growing frustration with the regime continues to spill out on the streets.

Crippling international sanctions imposed on Russia for the annexation of Crimea drove the country’s economy into a slump, and unpopular reforms like the raising of the retirement age in 2018 only added insult to injury. As a result, Russia has been regularly shaken by protests and unrest in the past two years.

“That is why now he is trying to solve two tasks at the same time: demonstrating to the society that there is no stagnation and, on the opposite, there are reforms, and securing his own political future,” he was quoted as saying.

According to the country’s constitution, Putin will have to step down in 2024, having served two consecutive terms. But the amendments Putin proposed this week would allow him to shift to the prime minister’s seat or continue to run the country as head of the newly defined State Council, a previously consultative body that consists of regional governments and federal officials.

“All of these are potential power bases where Putin could retreat after 2024, which would allow him to preserve a delicate political balance while pulling strings from the shadows,” said Cardiff University professor of international relations Sergey Radchenko.

Putin cast his constitutional change proposals as a way to strengthen parliament and bolster democracy. Kremlin critics described the proposed changes as an attempt by Putin to secure his rule for life. However, the suggested reform was so vague and far-reaching that there was hardly any public outrage about it.

When Xi moved to remove term limits in March 2018, there was barely a murmur of dissent. The official explanation was that the office of head of state needed to align with those of the other top posts — party general secretary and chairman of the Central Military Commission. Other explanations aren’t discussed and even party-backed scholars say the issue is a taboo topic.

The son of a former high communist official, Xi worked his way up through a series of increasingly important provincial positions before taking over as party head in 2012. He then began to consolidate power through a multi-pronged strategy of eliminating dissent and enforcing discipline through an anti-corruption campaign whose scale was unprecedented in recent years.

Xi’s ending of term limits was seen as an attack on former leader Deng Xiaoping’s attempts to regularize and institutionalize power following the cult of personality surrounding Mao Zedong and the political chaos of the 1966-76 Cultural Revolution. Xi further upended the thin precedents set in recent years by refusing to indicate a potential successor, leading to speculation he plans to continue ruling well beyond his second five-year term.

Putin, a former KGB officer, first took office in 2000 and secured popularity with promises of economic stability and ending the drawn-out wars with Chechnya, Russia’s troublesome region in the North Caucasus. He, too, cemented his rule by suppressing the opposition — through enforcing stricter control over the country’s media and giving vast powers to law enforcement and the security services. He has led Russia for more than 20 years — the longest rule since Joseph Stalin.

Their public styles are different. Xi generally communicates his vision for a powerful, prosperous China in dry speeches and prepared comments, while Putin tends to be more loquacious.

The Russian leader is also frequently biting in his comments about critics and the West — a task Xi leaves to underlings such as Foreign Minister Wang Yi.