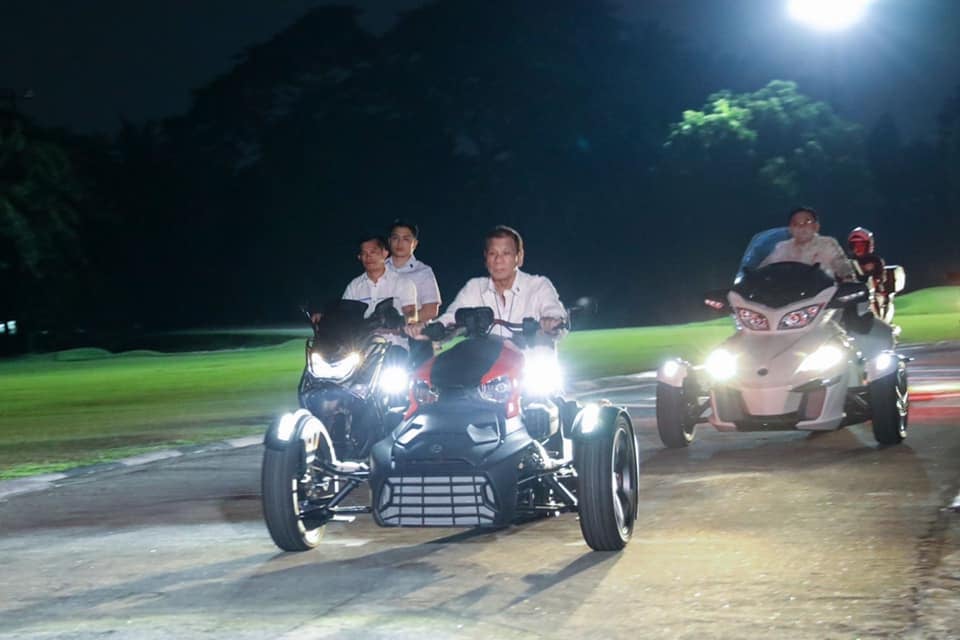 JOY RIDE President Duterte, a motorbike aficionado, drives a threewheeled motorcycle on the grounds of the Malacañang compound in Manila as Sen. Christopher “Bong” Go and three guards on separate vehicles follow him on Wednesday night. Go says Mr. Duterte, 74, needs to ride a motorbike to decompress.—CONTRIBUTED PHOTO

Sen. Christopher Go on Thursday came to President Rodrigo Duterte’s defense after netizens called out the President for indulging in a motorbike jaunt around Malacañang while thousands of evacuees from the Taal Volcano eruption needed government attention.

Several photographs on social media showed Mr. Duterte and Go riding huge three-wheeled bikes on Malacañang grounds on Wednesday evening. “The President works 24 hours. Can he not ride a motorcycle even for a short while just to remove the stress from work?” Go said.

Those criticizing Mr. Duterte should just focus on helping the victims of the volcanic eruption, the senator added.

“The President has been in public service for 42 years and he is now 74 years old. To the critics, I hope you’d just help. Your criticism won’t be able to help or feed people. That’s a waste,” Go said.

Mr. Duterte on Tuesday visited Batangas to check on the evacuees forced out of their homes following the Jan. 12 eruption of Taal Volcano.

He apologized for not being on the scene immediately as, he said, the ashfall prevented him from flying to Manila from Davao.