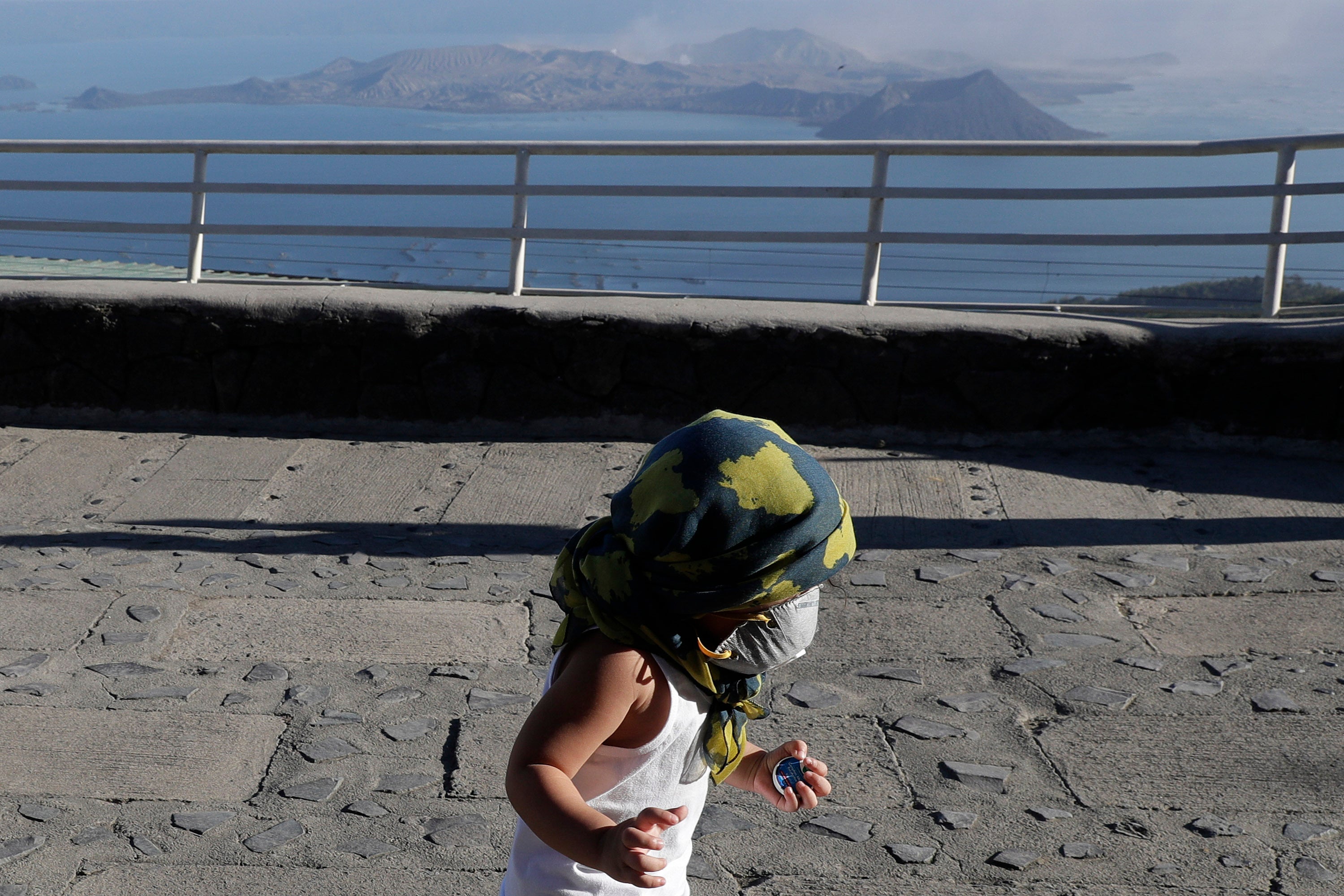 A boy wears a face mask as he plays with Taal volcano in the rear from Tagaytay, Cavite province, southern Philippines on Thursday Jan. 16, 2020. Taal volcano belched smaller plumes of ash Thursday but shuddered continuously with earthquakes and cracked roads in nearby towns, which were blockaded by police due to fears of a bigger eruption. (AP Photo/Aaron Favila)

Taal Volcano belched smaller plumes of ash on Thursday, but seismologists said that did not mean the volcano was calming down, as it shuddered continuously with earthquakes and cracked the ground in nearby towns—signs that it was building up power for a catastrophic eruption.

Intense volcanic earthquakes and high levels of sulfur dioxide emissions are indications that magma, or molten rock, is moving up and could burst out of the volcano at any moment, the Philippine Institute of Volcanology and Seismology (Phivolcs) said.

“A long lull could be just a break from volcanic activity. The danger remains,” she said.

“It’s common in volcanic eruptions that there are periods of lull, especially for Taal, like during its prolonged eruption in 1754,” Bornas said.

After a long silence, Taal erupted for seven months that year, burying four towns in Batangas under ash and rocks and ultimately changing the landscape of the province.

Bornas said the current lull could go both ways.

“If it continues, then it’s good. We may be able to already stand down,” she said. “But if it prolongs, it may be just a resting phase for the volcano to enter a new cycle of explosive activity.”

What’s important, she added, is that residents stay away from the danger zone.

Taal shot weak, steam-laden plumes up to 800 meters into the sky and crackled with nine “discrete weak explosions” on Thursday, Phivolcs said, noting that the volcano’s activity had “generally waned.”

Phivolcs Director Renato Solidum said no new fissures were reported on Thursday, but the water in Taal Lake had been receding at Talisay, Laurel, Alitagtag and Lemery towns in Batangas province.

On Wednesday, Phivolcs reported that Taal’s main crater lake and the nearby Pansipit River had dried up, a sign of the volcano’s continuing restiveness.

On Thursday, some residents took advantage of what they perceived as a lull in the activity of Taal, the country’s second most active volcano, to return to their homes in the 14-kilometer radius danger zone to retrieve belongings and feed pets and farm animals.

Authorities locked down towns within the danger zone on Wednesday, but on Thursday allowed the residents a four-hour window—from 6 a.m. to 10 a.m.—to inspect their houses and collect things, instructing them to return to the evacuation centers as quickly as possible.

Reports of looting in Talisay town prompted the easing of the lockdown. Residents interviewed by the Inquirer said the looters were not from the local community.

The Department of the Interior and Local Government (DILG) directed the Philippine National Police, which is already enforcing the lockdown, to deploy officers to patrol the villages to protect homes from criminals.

Although Interior Secretary Eduardo Año had called on residents of the 199 villages and 15 towns and cities within the danger zone to stay in the shelters, Jonathan Malaya, the DILG spokesperson, said the agency wanted the evacuees to have peace of mind. “So we have police officers on patrol in the evacuated barangays to ensure that criminals will not take advantage of this tragedy,” he said.

Reports that authorities were struggling to keep the evacuees away from the danger zone prompted Sen. Sherwin Gatchalian to propose the arrest of people who would defy the lockdown, take them to a barangay hall or police station and hold them there until they calm down.

“I believe in prevention. It’s right that there is a lockdown, because we’re not sure of the situation and we’re not sure what will happen,” Gatchalian said at a news forum in the Senate.

“I call on our countrymen to cooperate, listen to authorities, since this is being done for their own good,” he said.

Gatchalian also defended Phivolcs against calls in the House of Representatives for an investigation of alleged “lapses” in monitoring that had left people in the volcano region unprepared for an eruption.

“There are monitoring systems to know the activity of a volcano, but no software can predict volcanic eruptions,” Gatchalian said.

“At this point, Phivolcs did what it could to give warnings to local governments and citizens that the volcano could erupt at any time,” he said.

“I don’t see any lapses on the part of Phivolcs. It did what it could using new technology to give warning. It’s Phivolcs’ job to give the warning. It’s the people’s duty to listen to the warning and take action, and it’s the task of local governments to ensure that the warning is followed with action,” he said.

More than 120,000 people fled their homes just in Batangas province, which has declared a state of calamity to allow faster release of emergency funds. At least 373 evacuation sites were crammed with displaced villagers and needed ash mask, portable toilets, bottled water and sleeping mats, according to a provincial disaster response officer.

The National Disaster Risk Reduction and Management Council reported a little more than 65,000 people were displaced by the eruption in Batangas and in Cavite province. The reason for the discrepancy was not immediately clear.

Presidential spokesperson Salvador Panelo on Thursday said there was no need for President Duterte to declare Volcano Island a no man’s land because the government had long designated it as a permanent danger zone.

“All they have to do is to implement. That has been a policy even before,” Panelo told reporters.

He gave assurance that the government would resettle the people who had been evacuated from Volcano Island, and that there were funds to finance the resettlement.

Panelo said the government had not yet seen a need to seek help from the international community in handling the crisis and the resettlement of the evacuees from Volcano Island. —WITH REPORTS FROM MARICAR CINCO, LEILA B. SALAVERRIA, JEANNETTE I. ANDRADE, JULIE M. AURELIO, AFP AND AP