From Inquirer volunteers, cupfuls of compassion‍ for displaced folk 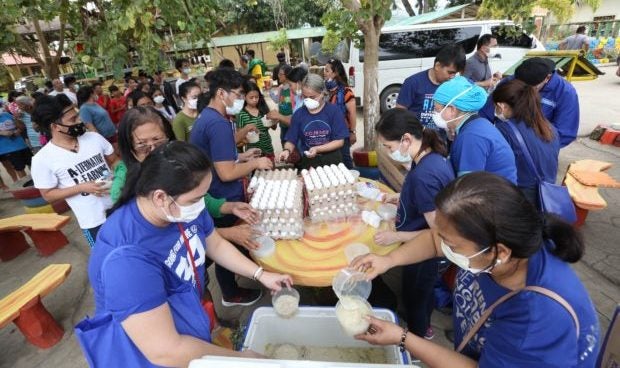 They fled their homes on Sunday afternoon as Taal Volcano, just 3 km from their village, belched ash and steam, the beginning of a major eruption.

But staying in Calantas has its drawbacks, according to evacuees, because of the village’s location — 5.5 km from the national highway, so far it has often been left out in the distribution of relief goods.

“We can’t help but wonder if help would be forthcoming because all the trucks of relief aid have been sent to other evacuation centers but not Calantas,” said Rechelle Nicdao, 32, from the subvillage of Bucal.

On Wednesday, 250 evacuees from Calantas Elementary School, as well as those in Lumbang na Bata Elementary School, became beneficiaries of the soup kitchen organized by Inquirer Foundation Inc., the social responsibility arm of the Inquirer Group of Companies.

They also donated used clothing and bathroom towels for the evacuees, many of whom escaped from Taal’s wrath on Sunday with only the clothes on their back.

The Inquirer soup kitchen treated the evacuees to servings of arroz caldo and boiled eggs.

The soup kitchen came as a welcome relief for the weary residents of Laurel, Agoncillo and Lemery towns, as each family used to cook their own food at the evacuation center, Calantas village chief Mario Baldrias said. 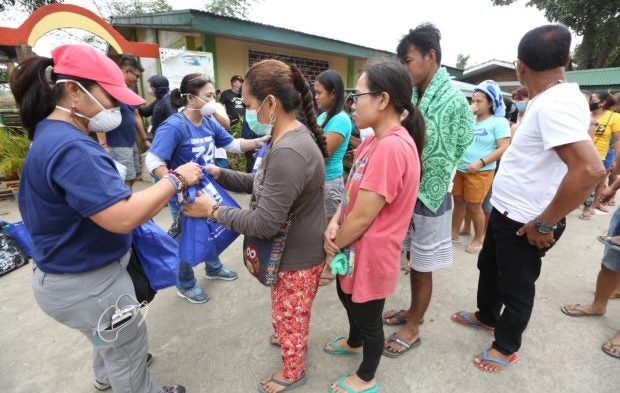 He said the barangay opened the school to shelter the evacuees who had no relatives in the village.

Bracing for the worst

“For how long we can sustain this, we don’t know. But we have to brace for the worst, as these are unusual times,” Baldrias said.

For evacuee Jocelyn del Mundo, resident of Subic Ibaba in Agoncillo town, the soup kitchen served as a resumption of her and her son Jaylord’s aborted 40th and 12th birthday celebration.

“We were about to have our celebration when the volcano erupted. But I’m glad we have this (soup kitchen) now, as it somehow eases the pain,” she said.

Lemery resident Sharon Sarmiento, 41, who was among the people who fled the dust storms whipped up by fallen ashes from Taal Volcano in the lakeside village of Tubigan, expressed thanks for the arrival of relief goods from the Inquirer Foundation.

“We were concerned no relief goods could reach us here because we are so far away from the main road. But we’re thankful they are here,” she said, referring to the Inquirer volunteers.