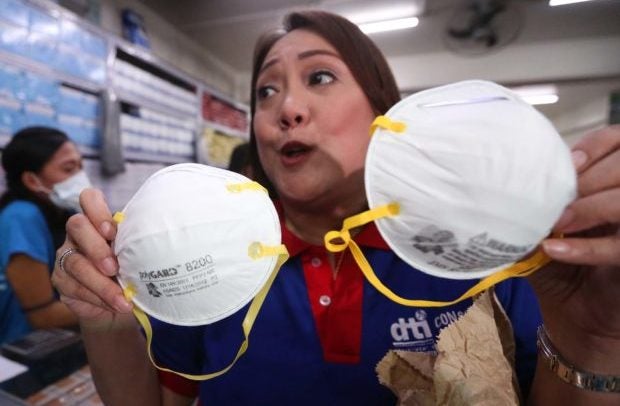 N95 FACE MASK PRICES SET Under a price freeze order issued by the Department of Health for medical supplies in areas affected by eruptions of Taal Volcano, N95 face masks should be sold for P45 to P105 each. Trade Undersecretary Ruth Castelo holds in her left hand an N95 mask she bought at a Southstar drugstore for P50. The one in her right hand was sold for P100 at a medical store on Bambang Street in Manila. —MARIANNE BERMUDEZMA

MANILA, Philippines — The Department of Health (DOH) has ordered a price freeze on 218 basic and essential medicines and medical supplies, including face masks, in areas affected by the eruption of Taal Volcano.

While the price freeze covers only areas adversely affected by the eruptions, the list may be used by the general public as a reference to suggested retail prices of health products in the market, according to the DOH.

The DOH move came as the Food and Drug Administration (FDA) dispatched inspectors to medical supply stores to check not just for overpriced N95 masks, but also for low-quality or counterfeit ones that offered little or no protection, according to Health Undersecretary Eric Domingo.

Domingo said the low-quality masks would have to be confiscated.

An N95 mask is of particular importance because it is registered as a medical device and has to follow certain standards, Domingo said in a press briefing in Malacañang.

N95 masks have been on demand because they are capable of filtering at least 95 percent of airborne particles, making them ideal for protection against ashfall. An N95 mask is usable for a maximum of eight hours of continuous use, according to the US Food and Drug Administration.

The prize freeze only applies to the affected areas, but imposing a suggested retail price (SRP) would give face masks a consistent price range everywhere, according to the Department of Trade and Industry (DTI), which wants face masks to have an SRP.

Trade Secretary Ramon Lopez said on Wednesday that the DTI had recommended that face masks be put under SRP as soon as possible, given the urgency of the situation after the Taal Volcano started erupting on Sunday.

“We have verbally told [President Duterte] and he is very supportive of it,” he said in a Viber message. He said face masks are “critical during these times.”

The DTI and DOH have recommended to the Office of the President the imposition of price ceilings not only on N95 and disposable face masks, but also on nebulizers and nebulization kits, oxygen cannulas and safety goggles.

In a department memorandum dated Jan. 14, Health Secretary Francisco Duque III said the DOH was mandated to monitor and regulate drug prices and to ensure that consumers were adequately protected against profiteering, hoarding, cartels and the like that compromised their access to pharmaceutical products.

In a statement, he said the DOH was also tasked with protecting the Filipino people against life-threatening situations, including those that prevented them from seeking the right and adequate products and services when they needed them the most.

“Essential medicines have been identified as a basic necessity in times of natural calamities and man-made disasters that put the health and lives of Filipino at risk because of unfavorable conditions that cause or aggravate disease, which may lead to epidemics and massive death,” Duque said.

Some antibiotics, analgesics, antiallergies, anticonvulsants, antidiabetics, antihypertensives and anti-asthma are among those covered by the order.

Citing Section 6 of Republic Act No. 7581, Duque also said it was the policy of the state to ensure the availability of basic necessities and prime commodities at all times.

Unless otherwise lifted by Mr. Duterte, the price freeze order will remain in effect for the duration of the situation.

The DOH issued the price freeze order following reports that some stores had jacked up the prices of N95 masks from P200 to P400 each.

Trade Undersecretary Ruth Castelo said the P45 to P105 price for N95 masks would depend on the brand and the quality of the item.

The law allows only a 10-percent profit markup. This is why those increasing prices by 20 to 30 percent would be charged, she said.

“So, again, we issue the warning to retailers and business establishments that we will not stop running after them, especially in this kind of a situation where there is a calamity,” Castelo said.

Domingo said N95 masks had to be registered with the FDA and should pass the standards set for that particular product.

A registered N95 mask has to be backed by documents that show how it was made and its filtration effect. These masks have to carry the N95 label. They are a few millimeters thick and mold to the contours of the face, according to Domingo.

“If you have doubts, if it’s too soft or too thin and it doesn’t contour well to the face, then that’s probably a falsified product or a counterfeit,” the health undersecretary said.

There has been a shortage in the supply of N95 masks, as popular pharmacy chains Watsons Philippines and Mercury Drug announced on Monday that they had temporarily run out of supply.

The gap in the market left a hole that is now, in some cases, filled by those who profit and hoard at the expense of countless others.

Technically speaking, profiteering only happens when a product is considered a basic necessity and prime commodity, according to the Price Act, which is not the case for face masks. This is also why there is no SRP on the product yet.

Anyone convicted under the Price Act could face up to 15 years in prison and a fine between P5,000 to P2 million.

Those who sell nonregistered and substandard N95 masks could face administrative charges as well as charges for violating the Consumer Act.

The DTI has also cracked down on stores selling overpriced N95 and other types of masks amid the panic from the Taal Volcano eruption.