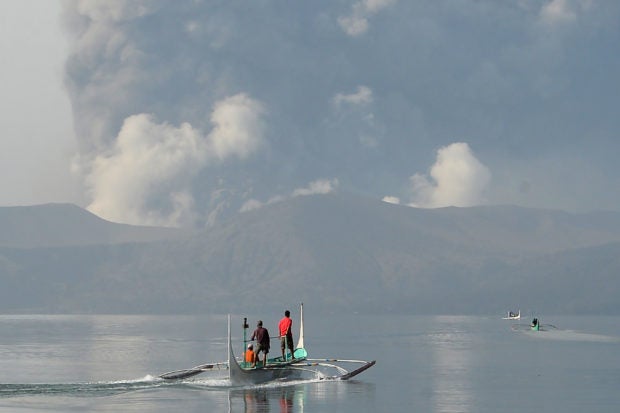 Residents living at the foot of Taal volcano ride outrigger canoes to reach their homes while the volcano spews ash as seen from Tanauan town in Batangas province, south of Manila, on January 13, 2020. – The Philippines was on alert January 13 for the “explosive eruption” of a volcano south of Manila, which officials said could be imminent after a massive column of ash forced a halt to flights at the capital’s main airport. (Photo by Ted ALJIBE / AFP)

MANILA, Philippines — The Philippine Institute of Volcanology and Seismology (Phivolcs) have recommended that villages near Taal Volcano should carry out a “hazard-sensitive” land-use plan in the future.

Phivolcs chief Renato Solidum Jr. said Wednesday that this recommendation, among others, has been submitted to President Rodrigo Duterte following Tuesday’s briefing with national and local government officials in Batangas.

Solidum said such a plan will consider the dangers of future volcanic activities as well as its effects on people, particularly their displacement.

“Na-approve na ang mga recommendations na ‘yun (Those recommendations were already approved),” said Solidum, adding that these will be implemented after the Taal’s unrest because it would require collaboration with the local government.

(If a full-blown explosive eruption occurs, the area will be devastated. So it means, nothing to go back to.)

No specific areas were cited by Phivolcs, but according to Solidum, in addition to Taal Volcano Island, areas surrounding Taal Lake should also be covered by the hazard-sensitive land-use plan because these are exposed to bay surges during explosive eruptions.

(The best thing really is, for people to better remember, these sites should not be touched.)

(More often than not, when we experience this kind of calamity, we’d rather urgently erase the signs.)

According to Bornas, it is important to memorialize danger zones so they can be easily identified and often remembered by the people.

For example, Bornas pointed out the fissures or cracks in the towns of Lemery, Talisay, and Tanauan, which was the result of Taal’s past eruptions.

Meanwhile, Solidum called the danger zones where fissures have appeared as “zones of weakness,” saying these parts will be largely affected by future strong quakes even if there is no eruption.