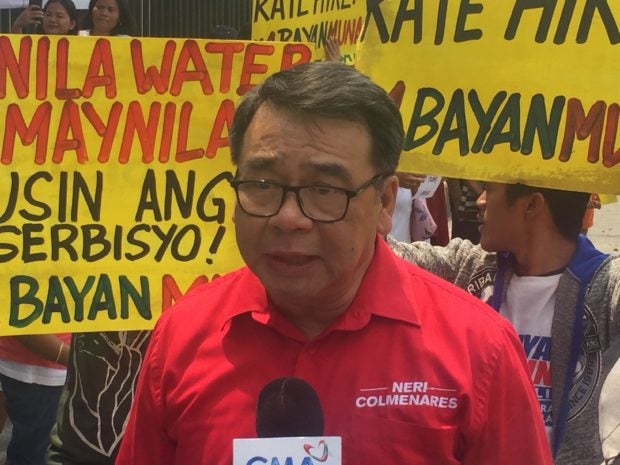 Colmenares said that Sabio’s communication is not the only case pending in the ICC, adding that the case filed by families of extra-judicial killings (EJK) victims “is very strong.”

“The case filed by families of EJK victims is very strong as it is supported by affidavits of witnesses, government reports, official Philippine National Police (PNP) statistics, and Pres. Duterte’s admission to ordering the killings,” Colmenares said in a statement.

Colmenares’ remarks came after Sabio announced on Tuesday that he was withdrawing his communication before the ICC alleging Duterte committed crimes against humanity.

Sabio is a lawyer for a self-confessed member of the Davao Death Squad (DDS), Edgar Matobato.

Colmenares said that Sabio’s complaint was “mainly centered” on testimonies of DDS members Matobato and Arturo Lascañas as well as reports by Human Rights Watch and Amnesty International.

Meanwhile, the evidence in the case filed by the group Rise Up against Duterte are “direct evidence by witnesses and the families of the victims themselves,” Colmenares said.

“This case is sufficient to assure the continuation of the case and the indictment of Pres. Duterte in the ICC,” he said.

Further, Colmenares said the Rome Statute does not provide for withdrawal of communication filed by an informant.

Additionally, the ICC may still consider the factual allegations of Atty. Sabio despite his withdrawal.

“If he only procedurally withdrew his communication, but did not retract his allegations that Pres. Duterte ordered the killings, then his data on EJKs may still be considered by the Prosecutor,” Colmenares said.

Read Next
PNP: Removal of procurement power won’t affect big-ticket projects
EDITORS' PICK
PH preps for China virus: Question of when, not if
Beyond water service: Maynilad builds massive infrastructure projects to clean up Metro Manila waterways
Museums ‘put to sleep,’ churches closed amid volcano’s unrest
Seventh judge assigned to handle De Lima case
SM continues to send relief assistance to remote towns in Batangas
Get exciting deals and discounts when you download the new McDonald’s App
MOST READ
Taal Volcano flexes signs of restiveness anew
Part of Aurora Boulevard in Cubao closed from Jan. 25 – Feb. 1
Passengers from Wuhan, China to be flown out of Kalibo, Aklan – CAAP
Lacson on Duterte’s threat to end VFA over Bato’s canceled visa: Where is the connection?
Don't miss out on the latest news and information.