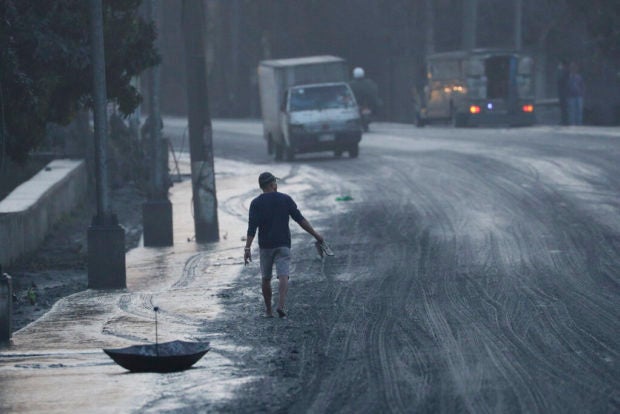 A man walks along ash fall covered road as Taal Volcano continues to spew ash on Monday Jan. 13, 2020, in Tagaytay, Cavite province, south of Manila, Philippines. The small volcano near the Philippine capital that draws tourists for its picturesque setting in a lake erupted with a massive plume of ash and steam Sunday, prompting the evacuation of tens of thousands of people and forcing Manila’s international airport to shut down. (AP Photo/Aaron Favila)

MANILA, Philippines — While recognizing it is not enough to compensate for the damage, the Department of Agriculture (DA) on Wednesday said there is still benefit from Taal Volcano’s eruption in the form of replenished soil.

Agriculture Undersecretary Ariel Cayanan said that when Taal Volcano exploded in the past, it changed the geographic condition — including the agro-climatic condition — in the area.

“Out of this calamity, ay mayroon namang beneficial na mangyayari, but of course that benefit is not compensating ‘yung damage,” Cayanan said during the weekly economic briefing at Malacanang.

(Out of this calamity, there is still benefit, but of course, that benefit is not compensating the damage.)

(The benefit we see is that the soil is replenished. There is a short-term, medium-term, and long-term benefit like in Mount Pinatubo.)

Cayanan said the Bureau of Soils and Water Management have been directed to study the condition in the area after the eruption.

(The land that may have been overused before is now covered so its nutrient content was replenished.)

(However, we are saying that since there are acidic particles, it needs to be studied by the Bureau of Soils and Water Management because there is traceability concern so we can assure that what we are eating are safe.)

Taal Volcano has remained under Alert Level 4, which is characterized by “intense unrest, continuing seismic swarms, including harmonic tremor and/or low-frequency earthquakes”. Government officials are still seeing an imminent explosive eruption as of posting.