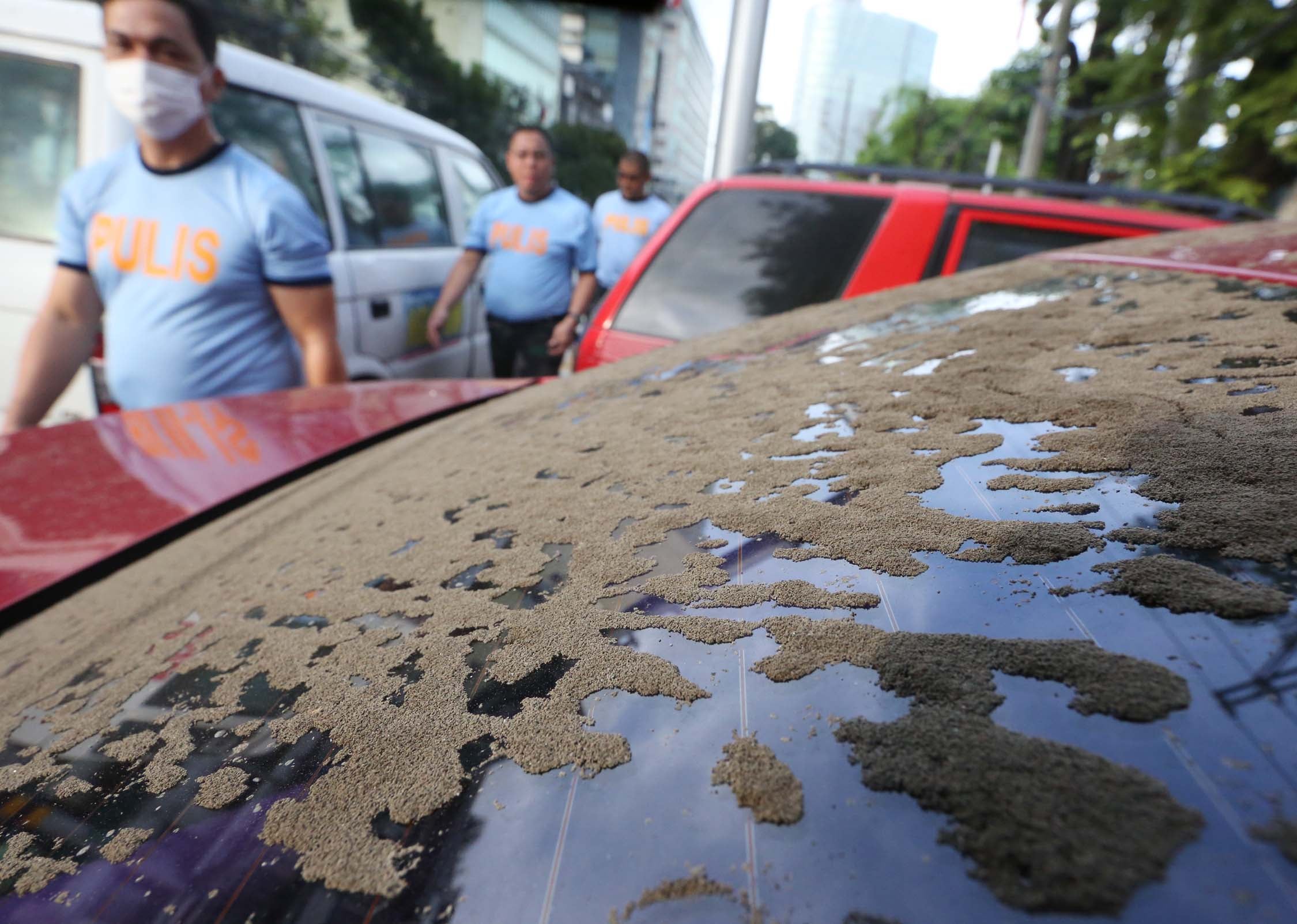 Ashfall from the eruption of Taal Volcano blankets vehicles parked on UN Avenue in Manila on Monday, turning a windshield into what looks like a relief map. —MARIANNE BERMUDEZ

MANILA, Philippines — Air quality in parts of Metro Manila continues to improve after it being affected by the heavy ashfall spewed by the erupting Taal Volcano, the Department of Environment and Natural Resources (DENR) said.

But data from DENR showed that as of 10 p.m. on Tuesday, the level of Particulate Matter 10 (PM 10), also known as dust, in Taguig City remains at 89, which is considered as “moderate or fair.”

Also included in the DENR’s air quality monitoring are the following Metro Manila cities and a municipality:

The record also showed a further improvement apart from Monday evening’s data. On Monday night, the  DENR recorded on Monday a PM 10 record of 53 for Malabon City.

According to the air quality index used by the DENR, having a “good” record means that “air pollution poses little to no risk.” A “moderate or fair” rating, meanwhile, means there is a “moderate health risk” for a small group of people who are unusually sensitive to polluted air.

When air quality reaches 301 up to 500, this is described as “hazardous” and people are advised “to remain indoors and to keep doors and windows closed unless heat stress is possible,” the DENR said.

Following the eruption of Taal Volcano on Sunday, heavy ashfall was experienced in Metro Manila, which led to the suspension of classes and government work.

Read Next
Drug war still gravest human rights concern in Philippines – HRW
LATEST STORIES
After winning title, time for LA Tenorio to give back to Batangas folk
‘Mia’: Rom-com with a cause a career-boosting showcase for Coleen Garcia
No.13 lucky for Orlando Bloom
The ties that bind: Why the guys of Black Eyed Peas prefer to stay together
How Yam handles flirtatious guys
MOST READ
Nadine Lustre’s phone stolen in Brazil
Gretchen Barretto’s daughter Dominique graduates magna cum laude from California college
Ginebra beats Meralco again to capture PBA Governors’ Cup title
Will you be the first P16 Billion Powerball jackpot winner from the Philippines?
Don't miss out on the latest news and information.