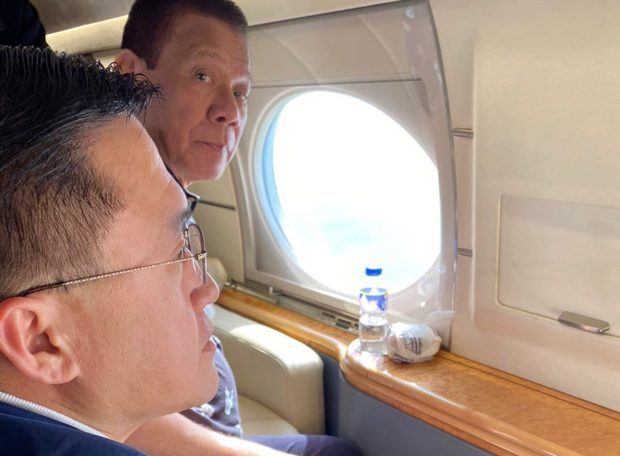 President Rodrigo Duterte flew back to Manila from Davao City with Sen. Christopher “Bong” Go in the morning of Monday, Jan. 13, 2020. (Photo from Sen. Bong Go)

During a situation briefing with officials in Batangas City, Duterte explained that ashfall prevented him from returning to Manila from Davao City.

“I’m sorry I was not around. I was in Davao, but I was preparing to leave that night when I was informed that I could not make it because of the ash,” Duterte said.

“So early morning, I insisted that I have to be here because there is a crisis at pinilit ko yung eroplano. They did something about the runway, making it wet so that there was less ash that would be seeping into the equipment of the plane,” he added.

Ashfall caused by the volcano’s phreatic, or steam-driven, eruption reached nearby provinces and Metro Manila, forcing the suspension of classes and work in government offices of the affected areas.

READ: Duterte back in Manila after ashfall-delayed flight