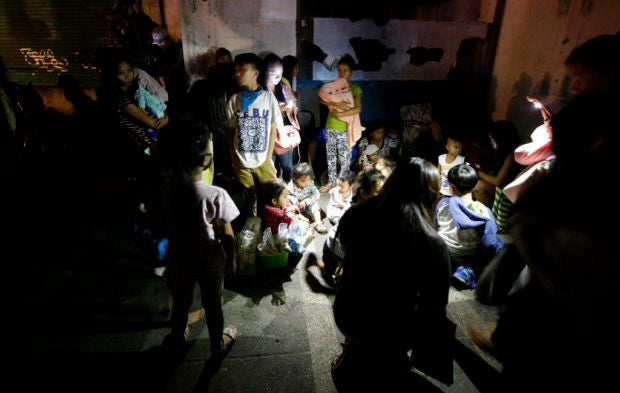 Evacuees gather beside a road as Taal Volcano erupts Sunday Jan. 12, 2020, in Tagaytay, Cavite province, outside Manila, Philippines. A tiny volcano near the Philippine capital that draws many tourists for its picturesque setting in a lake belched steam, ash and rocks in a huge plume Sunday, prompting thousands of residents to flee and officials to temporarily suspend flights. (Photo by AARON FAVILA / AP)

BATANGAS CITY, Philippines — President Rodrigo Duterte said on Tuesday he was pleased with how the government had responded to the Taal Volcano eruption.

Speaking at a situation briefing in this city with local and national government officials, the President reminded them, however, that rumbling of the volcano remained a “continuing one” and concerned agencies should not let their guard down.

“I am happy that we responded well. And we are here almost, especially the DSWD [Department of Social Welfare and Development] and the health authorities because that’s the main two problems really,” Duterte said.

During the briefing, Batangas Gov. Hermilando Mandanas mentioned that DSWD Secretary Rolando Bautista was among the first responders when the volcano spewed a giant ash column on Sunday afternoon, which was followed by a swarm of earthquakes, forcing thousands of residents near the area to flee.

“The local and national government must stay for a while and do their work until such time that we are ready to declare that the crisis is over,” Duterte said.

The Philippine Institute of Volcanology and Seismology (Phivolcs) raised Alert Level 4 over Taal Volcano, which means that an “explosive eruption” could happen in the coming hours or days.

The highest alert level is 5, indicating that an eruption is taking place.

More than 30,000 residents of Batangas and Cavite have been evacuated following the eruption.

Most of the evacuees came from Talisay and San Nicolas in Batangas.

Due to the volcano’s continued activity, a state of calamity was raised over the entire province of Batangas.