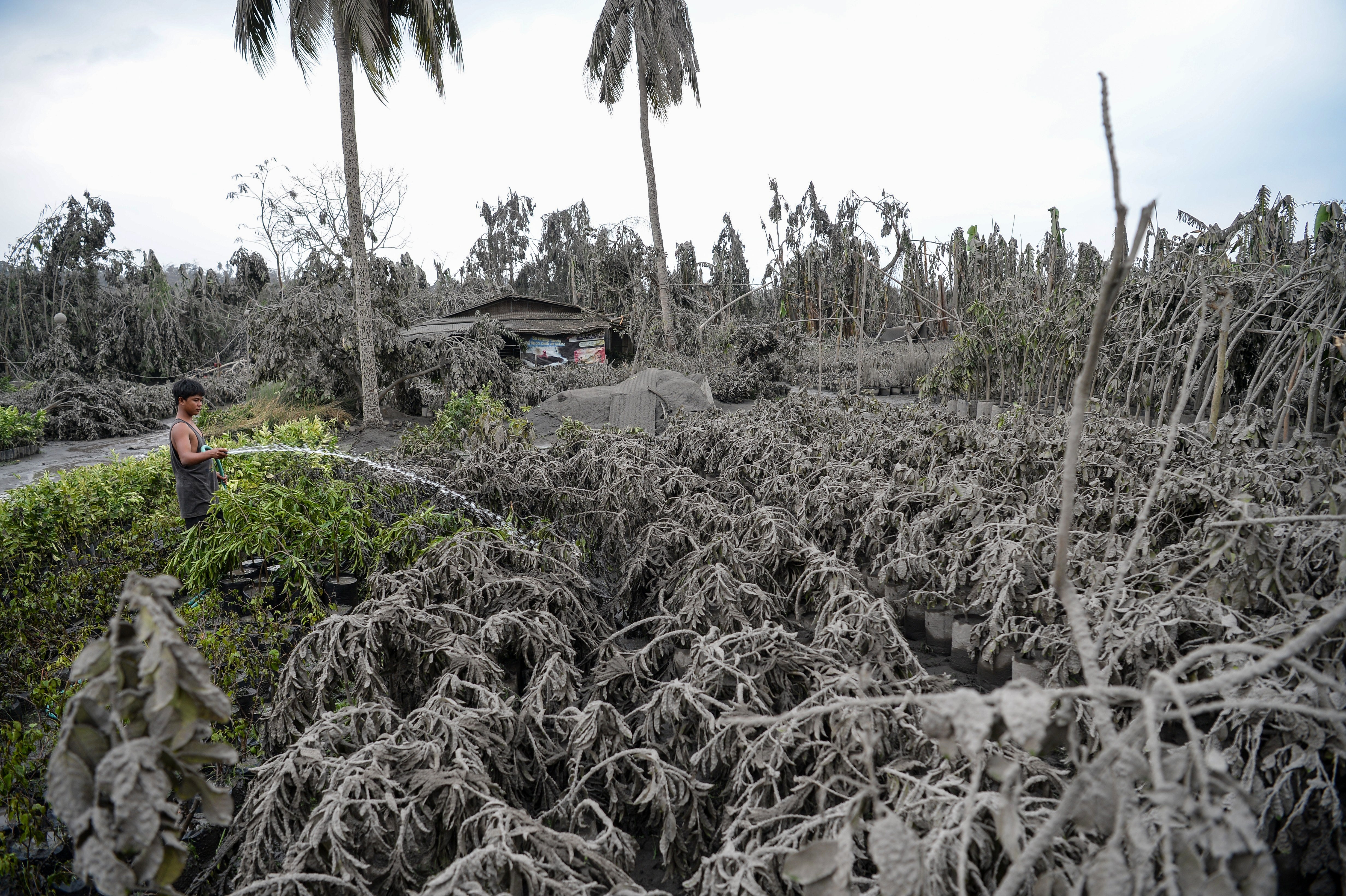 A worker hoses down plants covered with mud and ash after Taal volcano erupted, in Talisay town, Batangas on Monday. (AFP)

MANILA, Philippines — How would the massive volumes of ash from the restive Taal Volcano affect the agricultural areas where they fell?

For one agronomy expert, the ashfall spewed by Taal Volcano was “entirely different” from the ashfall that blanketed a large swath of Luzon during the 1991 Mt. Pinatubo eruption. The ashfall now would, in the long run, fertilize the soil.

“What I observed of the ashfall from Taal eruption was its powdery characteristic of clay particle which was entirely different from the ashfall of Mt Pinatubo eruption which was dominantly sandy of great value in construction,” said Adolfo Necesito, a former agronomy professor at the University of the Philippines in Los Baños.

In his Facebook post, Necesito said the ashfall from Taal Volcano is rich in potassium (K), an essential nutrient for plant growth.

“It is my contention that the powdery volcanic ashfall from Taal eruption is rich in K than the K-deficient nature of sandy ash fall from Pinatubo,” he said.

If potassium is deficient or not supplied in adequate amounts, plant growth will be stunted and yield is reduced.

Necesito added that depending on the severity or volume of ashfall, “clay by nature tends to harden soil surface and lower water infiltration unlike sandy soils.”

“Also powdery deposits on plant leaf surface clog openings for gaseous exchange in photosynthesis and respiration and the cooling effects of transpiration,” he added.

On Sunday, Taal Volcano had a phreatic eruption, which is explained as a steam-driven episode that occurs when water beneath the ground or on the surface is heated by magma, lava, hot rocks, or new volcanic deposits.

Taal is currently placed under Alert Level 4 by the  Philippine Institute of Volcanology and Seismology. This means that a hazardous explosive eruption is expected within hours or days.

BREAKING: Batangas placed under state of calamity due to Taal Volcano eruption

Nearly half of patients with COVID-19 experience loss of taste, finds new study