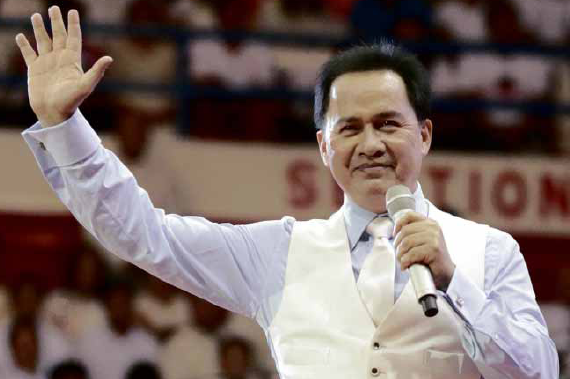 MANILA, Philippines–The lawyer of Kingdom of Jesus Christ founder Pastor Apollo Quiboloy questioned the timing of the filing of cases against the self-declared “Appointed Son of God.”

Atty. Israelito Torreon said he was convinced that “there is a grand conspiracy to destroy the name and image” of Quiboloy.

Blenda Portugal has filed cases of rape, qualified trafficking in person and child abuse against the religious leader.

In her affidavit, Portugal claimed that she was raped on Sept. 1, 2014 inside the compound of Jose Maria College. She was 17 years old at that time and one of the scholars and a singer of Quiboloy’s church.

“It appeared that she is well supported and well-financed. We know who they are and we are prepared for them. We will show them that Quiboloy is innocent,” the lawyer added.

Torreon said that Portugal only fired back at the evangelist after a  libel suit was lodged against her on Oct.22, 2010. The City Prosecutor of Panabo City, Davao del Norte issued a warrant for her arrest., he added

Portugal was accused of being responsible for spreading malicious comments against Quiboloy on Facebook using different names.

Torreon insisted that Portugal’s allegation was part of a “grand conspiracy” to pin down his client.

“We will show you that this is not true. Because Quiboloy is true to his mission to propagate love, the love for Jesus and we are here to cause the dismissal of the criminal cases filed to him,” he said.

The lawyer explained that their theory of grand conspiracy was boosted after Portugal still managed to get some confidential documents from the Kingdom despite leaving organization in May 2016.

Torreon is referring to internal office memoranda that Portugal obtained on November 21, 2018 and January 18, 2019.