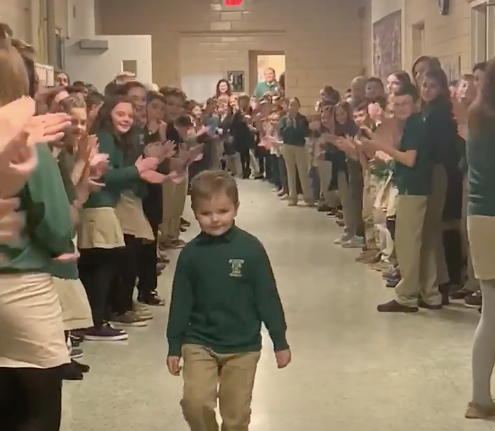 As a 6-year-old boy enters the new decade cancer-free, his school decided to surprise him with a celebration for the young warrior’s win against leukemia, which he battled for three years.

John Oliver Zippay, fondly called JO, was greeted with applause and cheers by his schoolmates, teachers and family, as he walked along the hallway of St. Hellen Catholic School in Ohio, United States last Wednesday, Jan. 8, as per Fox-affiliate WJW on the same day.

Zippay’s mother Megan gave the public a clip of the warm welcome through a video she posted earlier today, Jan. 12, on a Facebook group dedicated to Zippay’s fight against cancer, “Help John Oliver FIGHT Leukemia”.

Zippay’s schoolmates, teachers and family can be seen eagerly waiting for him to arrive, at the start of the video. When the leukemia survivor finally appeared, the hallway erupted in warm celebration from the crowd.

The 6-year-old’s courageous bout started on Nov. 1, 2016, when he was diagnosed with acute lymphoblastic leukemia, as per report. The diagnosis forced him to confinement for 18 days in the hospital, followed by numerous sessions of chemotherapy through the years.

Two days after last Christmas, however, Zippay underwent his final session of chemotherapy, allowing the 6-year-old to welcome the new year free from cancer.

“The day we have been waiting for for over 3 years has finally come!! John Oliver got his last IV chemo and got to ring the bell!!” his mother said on Facebook on Dec. 28. “It was one of the best moments surrounded by family, friends, and staff.”

“We couldn’t have made it through this journey without the support of EVERYONE,” she added.

Other than chemotherapy, Zippay for three years fought through the side effects of his treatment, and did not let these take a toll on his body, thus his parents are nothing but grateful today.

“He’s doing great! Yeah, he’s feeling better. A lot of his side effects over the years involved his legs from the steroids and he’s doing great,” Zippay’s father John was quoted as saying. “He had a meta-port in his chest so he wasn’t able to do any physical activity for three years. So it was hard for him, had to sit back for gym class and things.”

Despite his physical limitations during his battle, Zippay did not fall behind academically, according to school principal Patrick Gannon.

“Him having to miss some of the time was tough, but the class was just so happy to see him come back,” Gannon said in the report.

After the warm welcome, the school also treated the leukemia survivor with a video montage of his battle and eventual win against cancer. Family and friends are now excited and hopeful for the young boy’s life ahead of him, which he can now conquer with a little more adventurous spirit.

“You want that for your child, to grow up and get dirty and play outside and have fun and we kept him in a bubble so we’re excited,” Megan was quoted as saying. “Looking forward to the future and having our little boy back.”

“He loves planes, he’s kind of an old soul, he loves WWII and all that kind of stuff,” family friend and celebration organizer Shannon Formanski added. “[So] he’s really excited to be able to travel a bit more and do that kind of stuff.” Ian Biong/JB