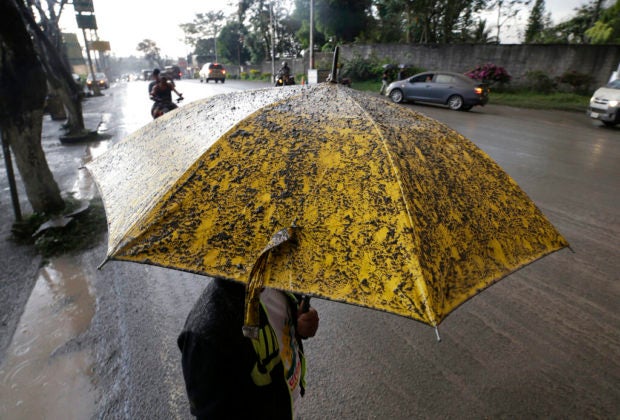 A man uses an umbrella to shield him from ashfall as Taal Volcano erupts Sunday, Jan. 12, 2020, in Tagaytay, Cavite province, outside Manila, Philippines. A tiny volcano near the Philippine capital that draws many tourists for its picturesque setting in a lake belched steam, ash, and rocks in a huge plume Sunday, prompting thousands of residents to flee and officials to temporarily suspend flights. (AP Photo/Aaron Favila)

MANILA, Philippines — As Taal Volcano erupted and caused heavy ash to fall over nearby areas on Sunday afternoon, air quality in some Metro Manila cities have worsened.

According to DENR, the amount of Particulate Matter 10 (PM10) – or dust in layman’s terms – in the National Capital Region has increased to levels that may pose danger to people’s health, specifically respiratory problems such as asthma, bronchitis, and emphysema.

On the list of affected cities presented by DENR, the highest amount of PM10 was recorded on Monday morning in Mandaluyong City at 118 which is considered unhealthy for sensitive groups.

It was followed by Las Piñas City at 108 and Taguig City at 104, both also considered unhealthy for sensitive groups.

At a press conference on Monday afternoon, DENR Undersecretary Benny Antiporda warned the public against the hazard posed by volcanic particles.

Health experts have advised the public to take precautionary measures by wearing appropriate face masks and goggles, and also to stay indoors.

Read Next
18 olive ridleys released to their natural habitat
EDITORS' PICK
‘A greener, cleaner tomorrow’: A how-to guide for Filipinos who want to help with today’s energy crisis
SM continues to send relief assistance to remote towns in Batangas
China expands lockdowns to 25M people to halt viral outbreak
Get exciting deals and discounts when you download the new McDonald’s App
DOH: Second person ‘under investigation’ for 2019-nCoV in Tacloban City
Taal Volcano flexes signs of restiveness anew
MOST READ
Taal Volcano flexes signs of restiveness anew
172 Chinese tourists arrive in Bohol
Lacson on Duterte’s threat to end VFA over Bato’s canceled visa: Where is the connection?
Police say soldier initiated shooting vs cops in Marikina
Don't miss out on the latest news and information.