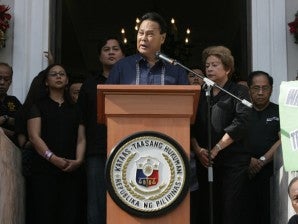 In a 38-page reply filed with the Senate on Monday, the prosecution team asked the chamber acting as an impeachment court to “deny Corona’s prayer for the dismissal of the complaint, proceed to trial forthwith and thereafter render a judgment of conviction” against the respondent.

“Corona is not immune from accountability. For all his self-serving, grandiose and arrogant claims, his impeachment is not an attack on the independence of the Judiciary, or the rule of law, or the system of checks and balances,” said the prosecution team.

“Corona’s impeachment is purely a response to the people’s clamor to hold him accountable for his sins and offenses, and purge the Highest Court of a morally unfit officer who has betrayed their trust” it further said.

Corona’s removal from office, the prosecutors said, would free the Supreme Court from the influence of former President Gloria Macapagal Arroyo and husband, First Gentleman Miguel Arroyo and their “cabal.”

“His removal will not weaken the Supreme Court nor the Judiciary. Rather, it will strengthen and invigorate the institution by ousting GMA’s (Arroyo’s initials) single biggest coddler in the Supreme Court, thereby

restoring the people’s faith in it,” they said.

The prosecutors also denied Corona’s allegation that the impeach bid against him was the handiwork of President Benigno Aquino III and the Liberal Party.

“This impeachment is not the handiwork of President Aquino, the Liberal Party and, much less, Justice (Antonio) Carpio and his ex-partners. The Impeachment Complaint was filed, and shall be prosecuted, by the sovereign Filipino people, acting through their directly elected representatives in Congress,” they said.

The impeachment, they said, was not also motivated by the Supreme Court’s decision in the case of Hacienda Luisita, “where the Supreme Court ordered the distribution of the lands owned by the Hacienda owned by President Aquino’s family, to the farmer-beneficiaries.”

They said Corona failed to mention that even President Aquino’s appointees in the Supreme Court voted in favor of the distribution, which belies Corona’s claim that President Aquino appointed Justices who would protect his perceived interests.

“While President Aquino may be passionate in his campaign against graft and corruption and for accountability and reform, this impeachment is not a ‘scheme’ of President Aquino,” said the prosecutors.

“This impeachment is the action of the sovereign people, who are now speaking through Congress, and telling Corona that his time is up. He has been tested, and found wanting,” they pointed out.

Also contrary to Corona’s claim that the impeachment was the handiwork of the Liberal Party, the prosecutors noted that most of the 188 members of the House of Representatives who filed the complaint did not belong to the group.

“None of them was offered any “tangible rewards” or received anything in return for filing the complaint, as Corona has falsely alleged,” they said.

“At any rate, whatever may be the stand of the Liberal Party or of the President himself is immaterial as long as the Impeachment Complaint is filed by the constitutionally required number of the Members of the House of Representatives, as in this case.”

The prosecution team further noted that none of the signatories, despite Corona’s allegations, had withdrawn their support on the complaint.