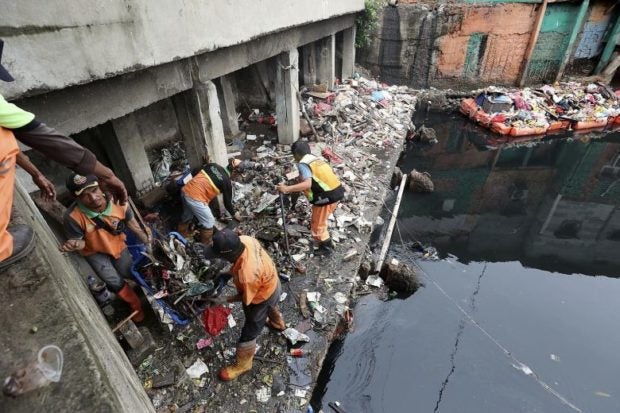 Workers collecting rubbish during a clean-up after floods over the New Year in the Indonesian capital Jakarta. PHOTO: ASSOCIATED PRESS, EPA-EFE via The Straits Times/Asia News Network

JAKARTA — Victims of the recent floods in the Indonesian capital are preparing a class action suit against regional governments, alleging that officials failed to adequately protect the public from flooding caused by a torrential downpour over the New Year, media reports said.

The number of claimants and the amount in damages sought are set to grow. Some 350 claims are outstanding as lawyers have not had time to assess all the complaints.

The class action suit, thought to be the first to claim for flood damage, reflects growing frustration that despite years of effort, the capital of 10 million residents is still hostage to yearly deluges, often affecting the city’s poorest.

Jakarta Governor Anies Baswedan has come under fire for cutting the city’s budget for flood mitigation each year since he took office in 2017.

Only half of a 30km stretch of the Ciliwung River has been cleared of human settlements which can exacerbate flood surges.

“This is the government’s fault. It’s not just the rain,” said Tanah Rendah resident Tika Suputro, in East Jakarta.

“There used to be work to widen the river. But that’s stopped.”

A visit to Tanah Rendah – which literally means lowlands – reveals what some of the city’s poorest must endure nearly every year.

Residents of this soggy patch, home to 1,800 families and just a stone’s throw from Ciliwung River, the biggest of the 13 rivers that run through Jakarta, said flooding during the New Year was the worst they had ever seen.

And more rain is on the way.

Indonesia’s meteorological service has warned of more heavy rain in Jakarta in the coming days.

That bodes ill for Ms Maurati, 43, who said it would already take a month for her house to properly dry off. She has hung her family’s clothes to dry on hangers on two long poles running the length of the ground floor. She apologised for the state of her house’s tiled floor, which still has a faint tinge of muck.

“I don’t dare finish cleaning it because the floods may come again,” said the mother of four, who goes by one name. “Everything is wet.”

Evidence of the deluge is everywhere. Soggy sacks of muck, dredged from the drains, crowd already narrow lanes. Prized belongings such as refrigerators and bicycles are hoisted high onto upper-storey verandahs, some wrapped in tarpaulin and lashed to banisters out of reach of the flood waters that residents estimate reached 4m.

Since the rains, some residents have developed rashes and coughs. Others face a life in disarray.

As Ms Sak’diah, 61, picks her way down a dimly lit alley, where a drain runs down the centre, there is foam bubbling over in places where discarded laundry water pools and eddies before reaching the river. She stops at the shell of what used to be her home. Her sisters Hasanah, 60, and Maesaroh, 55, who also go by one name, join her.

The second floor of their house has collapsed. Light filters through holes in the roof. Splintered trusses sag downwards into the centre of the gloom that used to be Ms Sak’diah’s kitchen.

“Everything here is lost,” she said as she pulls on her abaya, the head-and-shoulder covering garment which devout Muslim women wear.

Around her are lumpy stacks of clothes. A pair of gas canisters and a hotplate at her feet are likely past repair. “We are shocked. We don’t have anywhere to go.”

Mr Peter Letitre from the Dutch water management consultancy Deltares, which the government has roped in to help reduce the capital’s perennial flooding, said that while the rain over the New Year was exceptional, poor drainage and insufficient early warnings made a bad situation worse.

“It’s an exceptional amount of rainfall, but why did it have the impact it did?” he added.

A longer-term solution must include eventually halting the use of groundwater to stop portions of the city from sinking. It may also include moving affected people to drier land. “The new (Jakarta) government is unwilling to resettle residents,” he said.

Governor Anies has opposed relocating the slums because he maintains it separates the poor from their livelihoods and families.

For Ms Maurati, moving is a daunting prospect. She refuses to assign blame. “It’s heavy rain. We can’t control that,” she said.

Hoisting her crying four-year-old daughter to her hip to console her, she mulls over the prospect of needing to leave the place where she was born.

“Our jobs are here. Our lives are here,” Ms Maurati said.

“Still, if there was somewhere for us to go, we would.”