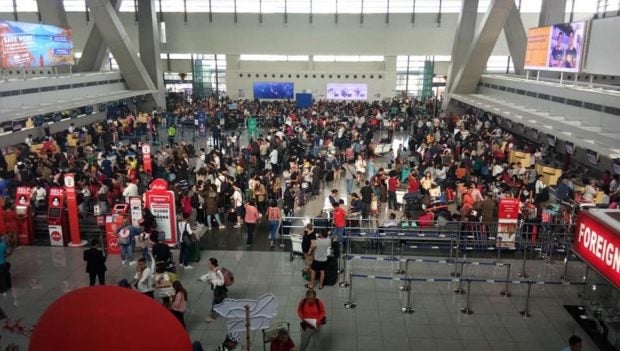 All flights were previously put on hold as the volcano – approximately 65 kilometers south of Manila – spewed a giant column of ash and steam on Sunday afternoon.

The Manila International Airport Authority (MIAA) and Civil Aviation Authority of the Philippines (CAAP) said the resumption of operations started at 10 a.m. Monday for departures and 12 noon for arrivals.

“This, however, will be subject to the terminal capacity of the four NAIA terminals and airline consent,” the agencies said in a statement.

Separation time between flights will also be made longer under the prevailing situation in order to give MIAA and CAAP better capability in managing terminal and runway capacities, it added.

The agencies likewise said they will prioritize the departing flights so that NAIA ramps would be cleared of planes that were parked in the facility since Sunday night.

The second priority will be given to regularly scheduled flights for Monday as this will give MIAA and CAAP better capability to allocate slots, officials explained.

In line with this, MIAA asked airline operators to submit their flight cancellations for Monday to give the slotting committee more room to allocate spaces to airlines wishing to mount recovery operations.

Following Taal’s phreatic eruption, an estimated 60,000 passengers were affected by the airport shutdown that held up 240 flights since.

Some flights were delayed, some were diverted to Clark, Cebu or Hong Kong, while some were canceled outright.

Major carriers like Philippine Airlines, Cebu Pacific and Air Asia have waived rebooking fees for confirmed passengers and offered full refunds for those scheduled to fly during the airport shutdown.

With this announcement, Transportation Secretary Arthur Tugade gave guidance to MIAA and CAAP to consult airline operators so they can come up with a workable and systematic schedule of recovery flights.

MIAA General Manager Ed Monreal then reiterated his appeal to passengers to continue coordinating with the airlines to confirm their updated flight schedules.

“We request the passengers to make sure that their flights can leave before proceeding to the airport,” the airport chief said.

Both aviation agencies urged airline operators to give their passengers as much information available for sharing.

Monreal, meanwhile, informed airline operators that there are still traces of ashfall on NAIA ramps.

MIAA said it began clearing the runways, taxiways, and ramps of ash fall since 4 a.m. Monday. Clearing of these facilities is still ongoing as of this posting.

On Sunday afternoon, Taal Volcano did a phreatic explosion spewing steam, ash and small rocks that prompted the government to order the evacuation of residents in nearby villages and ask tourists to leave Tagaytay, Batangas and Cavite areas as a precaution for an imminent eruption.

By Sunday night, the Philippine Institute of Volcanology and Seismology (Phivolcs)  raised to Alert Level 4 the danger status of the volcano. Alert Level 4 means a hazardous explosive eruption is possible within hours or days.