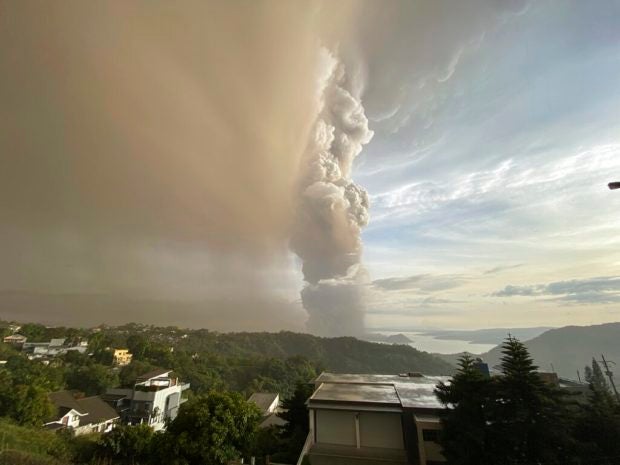 According to the United States Geological Survey (USGS), magmatic eruptions involve the rise of magma toward the surface, which normally generates detectable earthquakes.

It can also deform the ground surface and cause anomalous heat flow or changes in the temperature and chemistry of the groundwater and spring waters.

“This magmatic eruption is characterized by weak lava fountaining accompanied by thunder and flashes of lightning,” Phivolcs said.

A lava fountain from the main crater of the Taal Volcano was recorded by Phivolcs early Monday morning.

A phreatic explosion occurred at Taal Volcano’s main crater at around 1 p.m. Sunday.

Phreatic eruption is a steam-driven episode that occurs when water beneath the ground or on the surface is heated by magma, lava, hot rocks, or new volcanic deposits.

It can often precede, accompany, or follow a more traditional volcanic eruption, according to the USGS.

Taal Volcano remained under Alert Level 4, which means that “hazardous explosive eruption is possible within hours to days.”

Phivolcs strongly reiterated total evacuation of Taal Volcano Island and areas at high risk to pyroclastic density currents and volcanic tsunami within a 14-kilometer radius from the volcano’s main crater.

Resident in areas north of Taal Volcano are advised to watch out the effects of heavy and prolonged ashfall.

A total of 75 volcanic earthquakes were recorded in the Taal region as of 5:00 a.m. Monday, 32 of of which were felt with intensities ranging from Intensity II – V in Tagaytay City, Cabuyao, Laguna, Talisay, Alitagtag, Lemery and Bauan in Batangas.