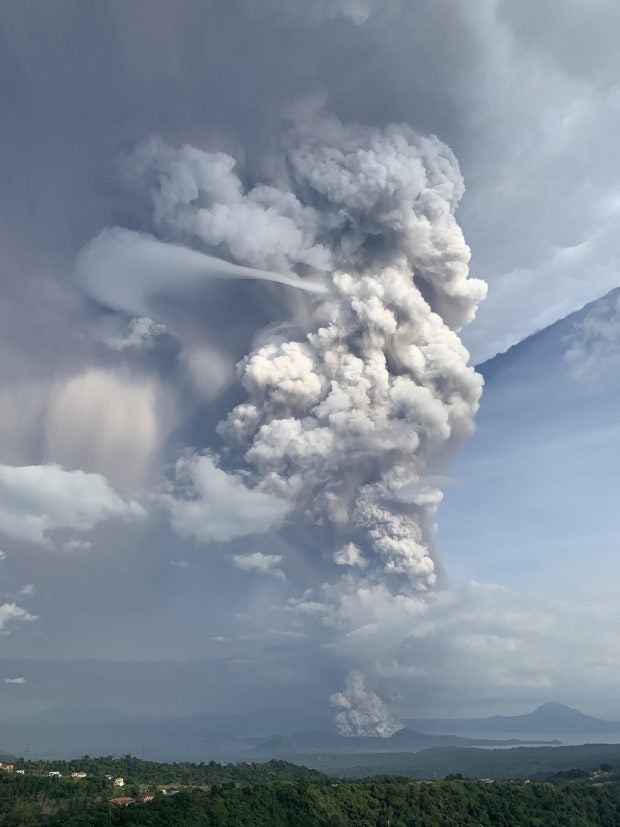 A phreatic explosion from the Taal volcano is seen from the town of Tagaytay in Cavite province, southwest of Manila, on January 12, 2020. (Photo by Bullit MARQUEZ / AFP)

MANILA, Philippines — The Philippine Institute of Volcanology and Seismology (Phivolcs) assured Monday that Taal Volcano’s eruption that causes numerous volcanic earthquakes in Batangas and nearby areas would not cause more tremors coming from the dreaded West Valley Fault.

(There’s no such connection right now. The eruption of Taal is not related to anything that may trigger movement from the West Valley Fault.)

Disaster officials have been warning of a powerful quake – possibly a magnitude 7.1 tremor – originating from the West Valley Fault, a 100-kilometer crack cutting across Metro Manila from Bulacan down to Laguna, which they have said is “ripe” for movement.

Phivolcs raised Alert Level 4 over Taal, the country’s second-most-active-volcano, on Sunday night which means a hazardous explosion may occur within hours or days.

The volcano also showed “weak lava fountaining” early Monday, which Philvocs said was a sign that it had a magmatic eruption.

Taal’s unrest has triggered volcanic earthquakes which were felt with intensities ranging from Intensity II to V in several towns in Batangas and nearby areas.

Ashfall from Taal, meanwhile, affected nearby provinces and has reached Metro Manila on Sunday night.

Phivolcs warned the volcano is “not done yet” as tremors near its vicinity signify continued unrest.