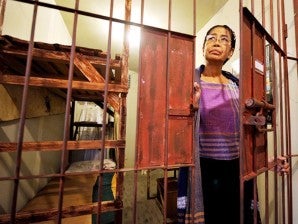 Hilda Narciso, a victim under the regime of late dictator Ferdinand Marcos, stands at the entrance of a replica of the prison cell where she was detained during a visit to the Martial Law Museum at "Bantayog ng mga Bayani" or Monument to the Heroes. AFP FILE PHOTO

As expected, militant party-list lawmakers and activists, most of whom were tortured and imprisoned during Ferdinand Marcos’ dictatorship, objected to the suggestion that his remains be buried with full military honors.

But others lauded the recommendation put forth by Vice President Jejomar Binay, with former Senator Aquilino Pimentel Jr., a key opposition leader and himself a detainee several times over during the Marcos regime, describing it as “solomonic.”

Pimentel said Binay “doesn’t antagonize the Marcoses with that recommendation, and at the same time pleases the people who are not necessarily happy with Marcos being buried at the Libingan.”

Bayan Muna Representative Neri Colmenares wondered why the government would honor “someone who is not a hero.”

“The blood of many martyrs and innocent civilians are on Marcos’ hands. He is responsible for one of the darkest times in Philippine history. Besides, the Marcoses have been remorseless and have not even issued an apology to the nation,” Colmenares said in a statement, adding:

“As long as the Marcoses maintain that they did not commit human rights violations, assassinated members of the opposition and established a dictatorship, there will never be reconciliation.

“Having been tortured and imprisoned for four years during martial law merely for demanding the reestablishment of student councils, I can’t accept any form of honor for Marcos.”

Colmenares is one of the party-list lawmakers who filed last week House Resolution (HR) No. 1297 opposing Marcos’ burial at the Libingan ng mga Bayani. The others are Teddy Casiño of Bayan Muna, Luz Ilagan and Emmi de Jesus of Gabriela, Raymond Palatino of Kabataan, Rafael Mariano of Anakpawis, and Antonio Tinio of Alliance of Concerned Teachers (ACT).

HR 1153, earlier filed by Sorsogon Representative Salvador Escudero, urges Malacañang to allow a hero’s burial for Marcos. It was signed by 216 House members.

ACT’s Tinio said Marcos’ family should just “give him a private burial where they can pay him tribute as they see fit.”

“The republic does not owe the late dictator the public honors demanded by his family,” Tinio told the Inquirer, adding that honoring him would be “a gross disservice to the memory of the genuine heroes of World War II,” he said.

“Have we forgotten that Marcos falsified his war record?” Tinio said.

“[But] giving full military honors to a notorious human rights violator might send a wrong message to the Filipino people, including members of the Armed Forces,” Reyes said.

He warned that it could “also lay the basis for an eventual transfer of [Marcos’] remains to the Libingan ng mga Bayani in the future.”

Danilo Ramos, secretary general of the Kilusang Magbubukid ng Pilipinas, said granting Marcos full military honors would be “an insult to the Filipinos’ fearless and heroic struggle against the dictatorship.”

“It sends a chilling message that under the Aquino regime, dictatorships are rewarded instead of being condemned,” Ramos said.

Commission on Human Rights Chair Loretta Ann Rosales, herself an ex-detainee, said she would ask President Aquino and Binay to reconsider the recommendation.

“It’s all right to bury [Marcos] in Ilocos Norte but don’t give him full military honors because of the plunder and gross violation of the civil and political rights of the people,” Rosales said in an interview.

“[The burial] should be quiet and without fanfare. Let his family, friends and loved ones bury him with dignity, but don’t give him full military honors,” said Rosales, who also chairs Claimants 1081, a group of victims of rights violations during the dictatorship.

“Giving him full honors is an insult to the people’s uprising. That’s a golden period in our history,” she added, referring to the People Power revolt that ousted Marcos in 1986.

But other congressmen interviewed by the Inquirer said the recommendation was fitting for a former President and AFP commander in chief, and a military officer who fought for the country during World War II.

Aurora Representative Juan Edgardo Angara said he found “nothing objectionable” in the recommendation because the military itself had accepted that Marcos did fight for the country during the Pacific war.

San Juan Representative JV Ejercito agreed, saying it was about time the issue was closed.

Eastern Samar Representative Ben Evardone made a similar comment: “I hope that it will put closure to a sensitive and highly divisive issue. I hope all parties concerned will accept the proposal.”

“The issue has been beaten to death by the exhaustive polls that the Vice President conducted just to get the public’s pulse on the matter. This should end the question,” he said.