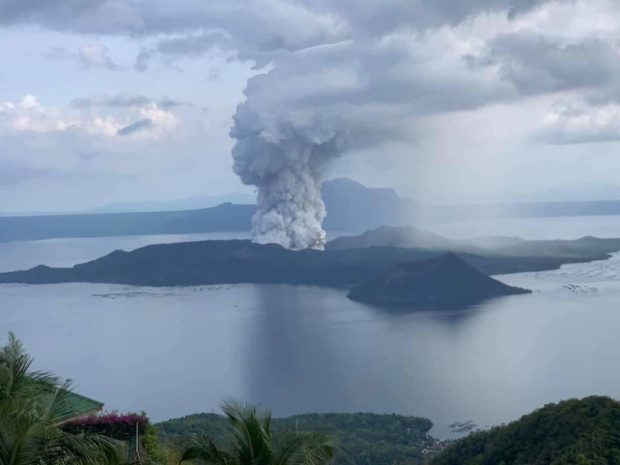 Loud booming sounds were heard by nearby residents when Taal Volcano erupted Sunday. These images were taken about 3 p.m. or 2 hours after the eruption from Tagaytay City, Cavite. Photo from Tagaytay City Cavite Disaster Risk Reduction Management Council

MANILA, Philippines — The alert status of Taal volcano has been raised to Alert Level 3 by the Philippine Institute of Volcanology and Seismology (Phivolcs) after the volcano spewed ash in a phreatic eruption around 1 p.m.

In its 4 p.m. bulletin, Phivolcs said Taal volcano “has escalated its eruptive activity, generating an eruption plume one kilometre-high accompanied by volcanic tremor and felt earthquakes in Volcano Island and barangays of Agoncillo, Batangas.”

It adds that “ashfall is currently being showered on the southwest sector of Taal.”

Because of this, Phivolcs strongly recommends the Taal Volcano Island and high-risk barangays of Agoncillo and Laurel, Batangas to be evacuated due to possible hazards of pyroclastic density currents and volcanic tsunami.

In addition, entry to the Volcano Island, which is a Permanent Danger Zone, and to the said barangays are prohibited.

Communities around the Taal Lake shore are also being advised to take precautionary measures against possible lakewater disturbances due to the ongoing unrest.

Alert Level 3 means there is magmatic intrusion that is likely driving the activity. There is also “relatively high unrest manifested by seismic swarms including increasing occurrence of low frequency earthquakes and/or harmonic tremor (some events felt).”

Phivolcs’ Volcano Monitoring also states that “if the trend is one of increasing unrest, eruption is possible within days to weeks.”

Inquirer calls for support for the victims of Taal volcano eruption
Responding to appeals for help, the Inquirer is extending its relief to the families affected by the recent eruption of Taal volcano.
Cash donations may be deposited in the Inquirer Foundation Corp. Banco De Oro (BDO) Current Account No: 007960018860.
Inquiries may be addressed and emailed to Inquirer’s Corporate Affairs office through [email protected].com.ph.