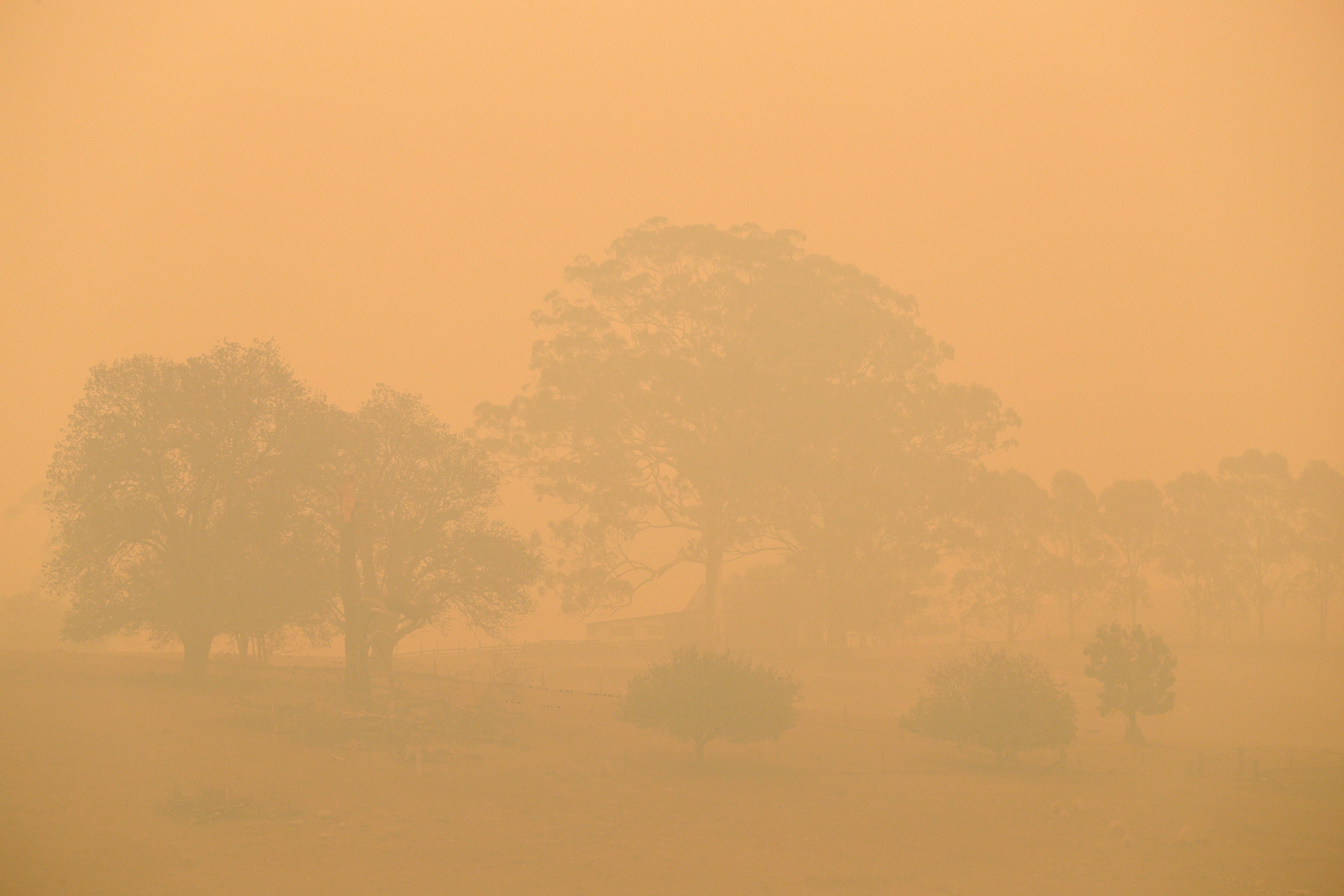 A field is shrouded with smoke haze near Burragate, Australia, Saturday, Jan. 11, 2020. Authorities were assessing the damage after firefighters battled flames fanned by strong winds through the night and lightning strikes sparked new blazes in New South Wales and Victoria, Australia’s most populous states. Conditions were milder Saturday and forecast to remain relatively benign for the next week. (AP Photo/Rick Rycroft)

BURRAGATE, Australia — A firefighter was killed by a falling tree while b attling the Australian wildfire crisis overnight and the prime minister on Sunday said his government was adapting and building resilience to the fire danger posed by climate change.

The 60-year-old married father of two was in November commended for 40 years service with the forestry agency.

“Although we do have enormous experience in identifying hazardous trees, sometimes these tree failures can’t be predicted,” Hardman said. “Working on the fire ground in a forest environment is a dynamic, high-risk environment and it carries with it significant risk.”

The tragedy brings the death toll to at least 27 people in a crisis that has destroyed more than 2,000 homes and scorched an area larger than the U.S. state of Indiana since September. Four of the casualties were firefighters.

Authorities are using relatively benign conditions forecast in southeast Australia for a week or more to consolidate containment lines around scores of fires that are likely to burn for weeks without heavy rainfall. The reprieve from severe fire conditions promises to be the longest of the current fire season.

The crisis has brought accusations that Prime Minister Scott Morrison’s conservative government needs to take more action to counter climate change, which experts say has worsened the blazes. Thousands of protesters rallied late Friday in Sydney and Melbourne, calling for Morrison to be fired and for Australia to take tougher action on global warming.

The chief executive of Siemens said Friday that the German engineering company will review its involvement in a coal mine in Australia after climate activists called for it to pull out of the project.

The group Fridays for Future, which has held weekly protests demanding action against climate change for over a year, wants Siemens to quit the mine project because emissions from coal-fired power plants contribute to global warming.

“This is a longer-term risk framework model which deals with one of the big issues in response to climate changing and that is the resilience and the adaptation that we need in our community right across the country to deal with longer, hotter, drier seasons that increase the risk of bushfire,” Morrison said.

Morrison said his government accepted that climate change was leading to longer, hotter and drier summers, despite junior government lawmaker George Christensen posting on social media over the weekend that the cause of the latest fires was arson rather than man-made climate change. Another junior lawmaker Craig Kelly has also publicly denied any link between climate change and fire crisis.

State authorities have said a minority of fires are deliberately lit.

“The government’s policy is set by the Cabinet. Our party room has a broad range of views,” Morrison said of those within government ranks who reject mainstream climate science.

“ There has been a deep scar in the landscape that has been left right across our country,” Morrison said. “But I am also very mindful, as is the government, of the very real scars that will be there for quite a period of time to come for those who’ve been exposed to the trauma of these bushfires.”

While the fire threat is most acute in rural communities, wildfire smoke that has choked some of Australia’s largest cities is a reminder to many urban Australians of the unfolding disaster.

The sails of the iconic Sydney Opera House were illuminated on Saturday night to show support for firefighters and wildfires-affected communities. The display included messages and photographs of firefighters who were fighting wildfires over the past few months.