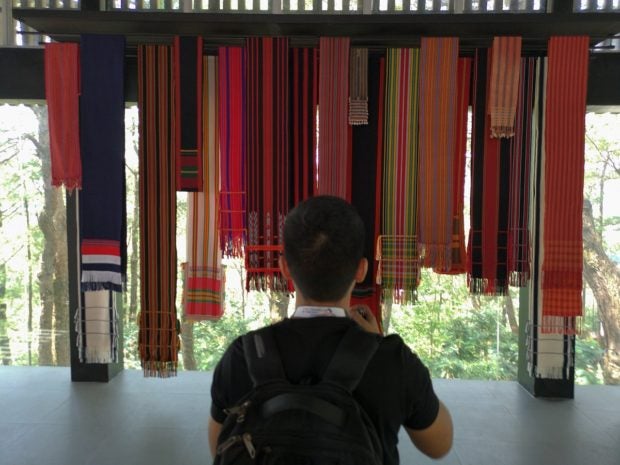 TRADITIONAL GARMENTS Museo Kordilyera at the University of the Philippines Baguio has been displaying traditional Cordillera garments, many dating back centuries, such as the Ga’dang beaded loincloth called “abag” often paired with the upper garment “koton” or beaded wraparound skirts called “aken” that are secured with the belt or “bakwat.” The Isnag’s “baal” (loincloth) and “bado” (wraparound skirt and upper garment) are also featured in the museum. —PHOTOS BY EV ESPIRITU

BAGUIO CITY, Philippines — Burnham Park visitors will soon get a sense of the intricacy of Cordillera textiles once these indigenous patterns are laid out as the eye-catching designs of new walkways in this popular tourist destination.

Architects commissioned by the city government for the redevelopment of the century-old park were drawn to the symbolism of woven Igorot fabrics, as well as the renewed popularity of tattoos because of Kalinga tattoo artist Whang-od, who has been declared a national living treasure.

They concluded that the weave patterns were suitable for the porous brick design of the pathway. The architects were recently invited to sample designs long thought extinct but now rediscovered by a multidisciplinary team of scholars from the University of the Philippines (UP) Baguio.

For the past three years, anthropologists, botanists, historians, mathematicians and even musicologists have been examining Cordillera textiles to see “how these have changed in the contemporary period,” Analyn Salvador-Amores, an anthropology professor, said in a paper she presented in November at the International Conference on Southeast Asian Crafts and Folk Art.

Amores leads the Cordillera Textiles Project (CordiTex), which found extant textiles that weavers had not produced for decades.

“The weaving knowledge of master weavers of the Cordillera are now elderly women, and the impact of oral tradition is now in a critical state and the tradition is in danger of being extinct,” said Rachel Kelly, a British researcher of Manchester Metropolitan University. 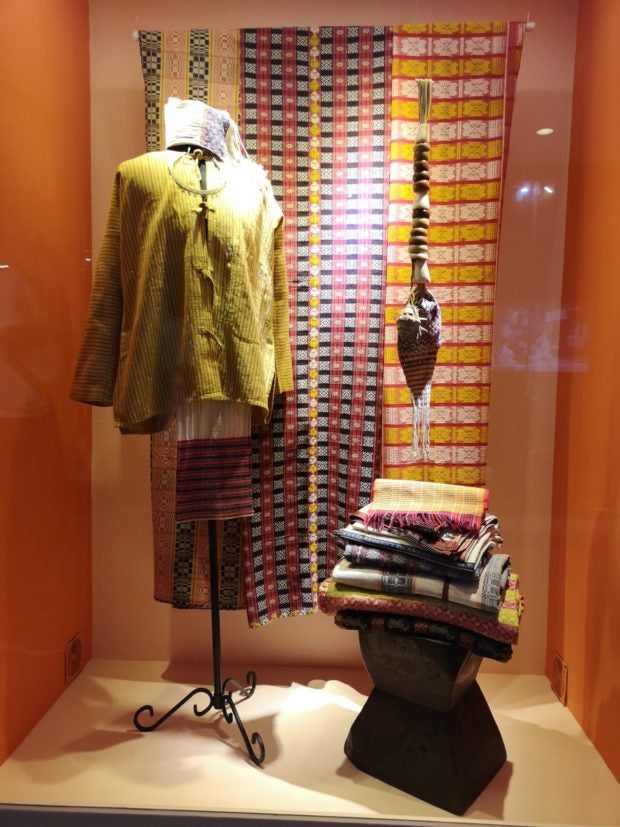 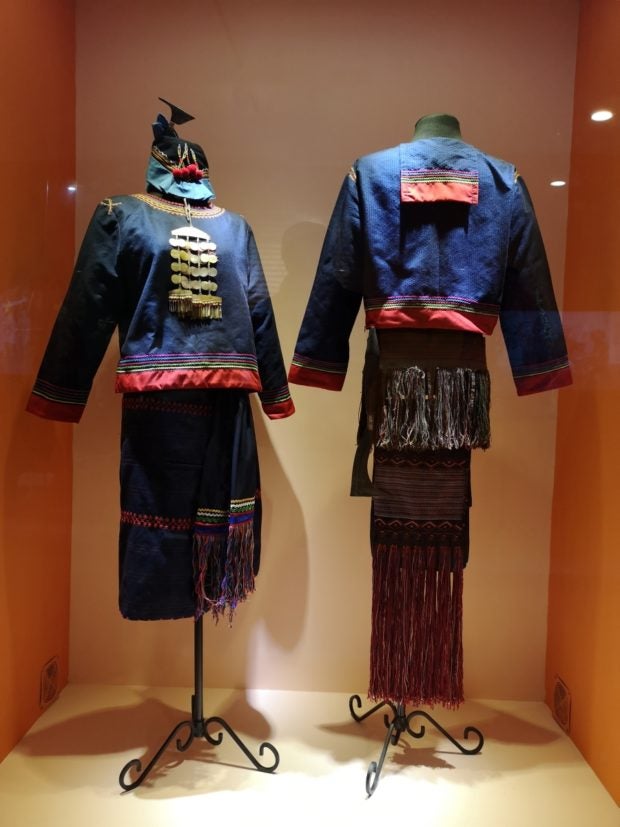 Kelly and other British experts have been collaborating with CordiTex to digitalize these textiles so a new generation of backstrap weavers can learn to reproduce extant patterns.

“Our project aims to raise the voice and visibility of oral craft traditions and explore opportunities digital tools may play in sustaining global craft practices,” she said.

While traditional weaving has been accorded the status as a national heritage, “the number of community weavers [that is] able to practice is dwindling,” Kelly said.

Some of the lost textiles have been preserved in museums abroad, according to Amores. She said a collection of 230 Cordillera textiles, including those found in Abra province, was unveiled for the first time after 150 years.

“The American Museum of Natural History, for instance, contains 139 Cordillera textiles that have not yet been studied and which are of unknown provenance,” she said.

She added: “We want to rejuvenate the interest of traditional weaving in the Cordillera and provide accurate anthropological and technical information.” 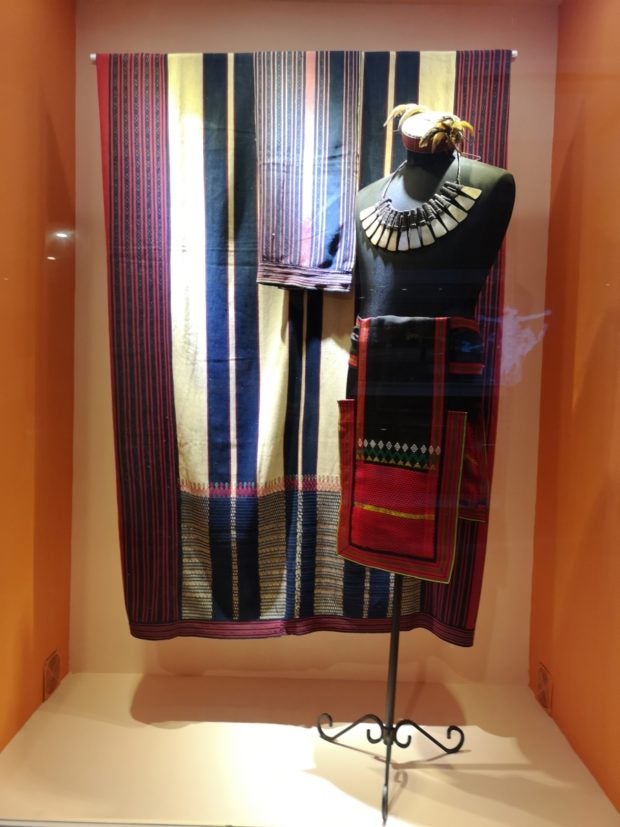 Bontok and Kankanaey men wear the “wanes” (loincloth). A blanket called “Pinagpagan” or “Pinagpakhan” is exhibited at the background. —EV ESPIRITU 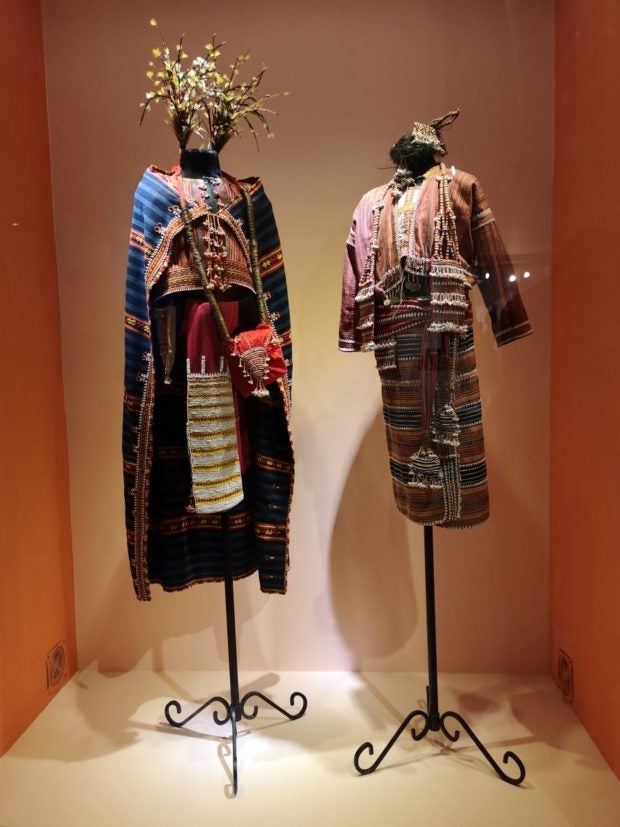 The team analyzed the weave patterns’ mathematical symmetry and an understanding of the original dye composition that was deconstructed by chemists, physicists and botanists.

“Most of the illnesses suffered by weavers are back pains, lung ailments and poor eyesight,” Amores said. This prompted the team to also tap human kinetics experts to design “ergonomically proper weaving looms.”Many of the fabrics they studied are on display at UP Baguio’s Museo Kordilyera.

The traditional Kalinga wraparound skirt called “kain” is among those on display. Called “gilamat” by Lubuagan communities, it is weaved using various embroidery styles that form into “a diamond pattern which is a stylized rendition of the prized shell pieces used to embellish the skirt,” according to the museum.

Because CordiTex intends to reintroduce authentic weaving, the scholars needed to reflect on the form and functionality of the textiles, Amores said. 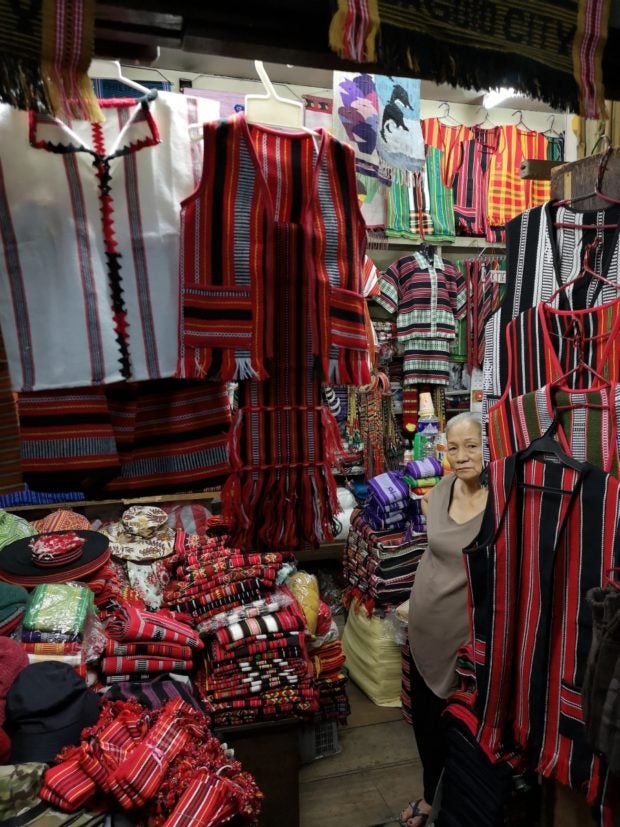 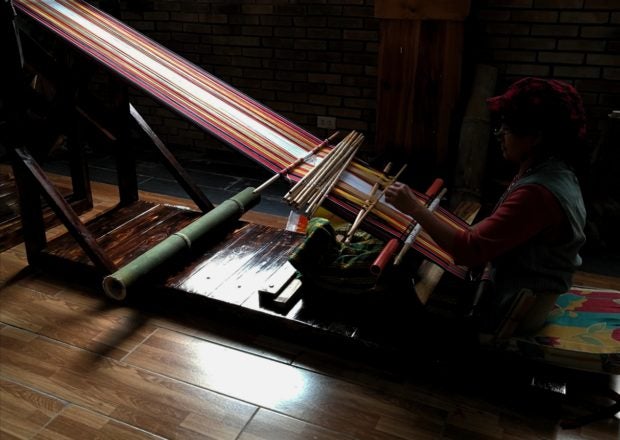 WEAVING SKILLS A Cordillera weaver demonstrates how traditional backstrap weaving is done during an arts festival at the ruins of Diplomat Hotel last year. —EV ESPIRITU

“Why is this design important for this particular group? Why did they choose this color and arrangement of patterns? So we met the master weavers in the Cordillera — from Benguet to [the Mountain Province capital town] Bontoc, Kalinga and Apayao,” she said.

Amores said mathematics played a role in selecting certain patterns. The “binakol” death blanket of Abra, for example, concentrates the design patterns in the center because weavers take into account the way it would be wrapped around the deceased, she said.

The British leg of the study has been drawn to the tradition’s societal impact on Cordillera women. Farms are constantly ravaged by storms brought on by climate change, making weaving a significant economic alternative for families, Kelly said.

“The autonomy of weaving as an identity for women is crucial,” she said. While many of the weavers who were interviewed lived below the poverty line, they appreciated how weaving allowed them “to work independently — something we are looking into with more depth,” she said.