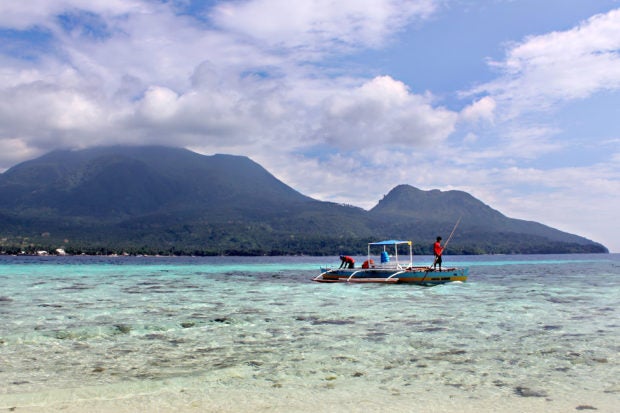 Crystal clear blue green waters of Camiguin’s White Island, with Mount Hibok-Hibok and Mount Old Vulcan as backdrop. The province seeks to regulate the influx of tourists in a bid to preserve its natural beauty. Photo by Erwin Mascariñas/Inquirer Mindanao

MAMBAJAO, CAMIGUIN—Long positioned as a prime tourist destination in Northern Mindanao region, leaders of Camiguin now want to regulate the influx of visitors to the tiny island province to ensure that its natural riches remain intact.

On Tuesday, Gov. Jurdin Jesus Romualdo said one way to protect the province’s natural resources was to regulate the entry of tourists to the optimum that it could handle.

“We are happy to share that we have started since last year [the] first steps toward establishing carrying capacity limits in our ecotourism sites, to determine the maximum number of people that can be sustained by the environment,” Romualdo said in his state of the province address at Camiguin Convention Center here.

He said he wanted to have a computed total carrying capacity for tourists for the entire island.“Before, we wanted to have as many people coming in. But it wasn’t right. There should be a carrying capacity to sustain our environment,” Romualdo said.From January to September last year, the province recorded more than 500,000 tourists, an average of 55,000 a month or close to 2,000 in a day.

Romualdo noted the increase in tourist influx owing to the opening of daily flights to the island from Cebu province, and flights from Manila five times a week.

He said there was a need to protect and conserve Camiguin’s ecosystem amid the increase in the number of tourists.With an area of 238 square kilometers, Camiguin has 90,000 people in five towns. It is popular for its beaches, sandbars and springs. Its hiking trails around the active Hibok-Hibok volcano are also a major attraction.During Holy Week, Catholic devotees trek to the volcano through the Panaad Walkway that features the stations of the cross.

Another tourist drawer is the Lanzones Festival every August.Livelihood activities

Officials also want to promote local livelihood activities like crop production that will not harm the environment. Already, the provincial environment and natural resources office has focused on expanding and protecting the province’s forest cover, enhancing biodiversity conservation, and developing its marine and coastal ecosystem.

Romualdo also emphasized the need for farmers to switch to organic agriculture to preserve the soil.

“While it is good to note the economic gains of having numerous investments in Camiguin, residents and visitors should make sure that the island’s environment is healthy and its tourist sites sustained so these could be enjoyed by more people in the years to come,” he said.